It was mentioned on the BWW forum, and it looked like the author was trying to channel David Hopkins. How could we not review this?

Chapter 1 beings with this "epilogue", then pictures of a little girl and then of some adult pursuers (I guess). The girl collapses in a forest, but is found by some Looney Tunes characters who show concern over her. Then we start reading about "inspirers" and "caretaturas". Whaaaaaaaaa...? Oh, we'll need to consult the Imaginatio Wiki listed below. After a set of confusing panels of weird pictures and dialogue, we come to this scene. Had everything been a dream? Maybe not? Will we even get any straight answers? Then all of a sudden the characters are signing up for school (presumably high school). Are the characters supposed to be Tiny Toons? And what happened to the human girl?

Chapter 2 takes place at school, where our characters have unpleasant experiences (real or imagined?) with their classmates. The two from the end of Chapter 1 meet again and become close friends since they are both caretaturas. In fact, letting their classmates know of this gains them popularity. Next, the feline caretatura finds herself seated next to Melodia, a female Martian. Yes, as in Marvin, who regards Earthlings with disdain. Melodia turns out to be a princess on her own planet, but Daffy Duck warns our heroes to not associate with any of the Martians at all. Our heroes ignore this admonishment when it comes to Melodia, but they do rebuff another Martian who tries to join their group because he is certainly creepy.

Chapter 3 continues the school theme. Melodia is evidently considered a traitor by her fellow Martians, though our skunk hero disregards this as she invites all her friends to watch her dance at an upcoming recital. Meanwhile, Marvin meets up with Melodia to talk to her, but she rebuffs him. Then the other Martians come by and admonish her for losing touch with her own people. Then the big Martian informs the others that he will be taken away from Earth by his family and that he will genuinely miss his schoolmates. Meanwhile, the skunk performs her recital ballet dance, but afterward, what is going on? I guess it's resolved...or maybe not. Anyway, her friends, who have come backstage, see her leave. Meanwhile, the duck finds our feline hero and shows her a picture she found in a house next to Daffy's. The picture depicts the relatives of the feline's father's family who had betrayed and abused them and the feline despises them for it. The duck happens to be Daffy's roommate and invites the feline to her home, and the feline reluctantly goes inside. Now what's going on? Well, well, we see the human girl again! And the feline finds a box with some money in it.

Chapter 4 begins with a beach volleyball game. Now are our heroes finally enjoying themselves? Nope, new worries. Our feline hero is afraid for her sister. Unfortunately with justification. It turns out even a beach vacation cannot make things better for our feline hero's family. But evidently something else does. Daffy, who lives next door, has a series of guests who live in his house, one of them being...yes, Pepe lePew, direct from France. Our feline hero has already moved in to escape misery from her relatives, only to be sexually harassed by Pepe lePew before Daffy intervenes. But our feline hero decides that she can just avoid him. Whoa, it's school time again, and..oh, no, it's Pepe lePew again! He wants her, but she rebuffs him to his dismay. Will she want to stay in Daffy's house after all?

The story continues, but I refuse to read another page. The whole thing is ugly, random, scattershot, and maudlin, but mostly just boring. I've seen all I need to.

UPDATE: The author decided to put a stop to this thing. Wonder why they even started?

SECOND UPDATE: The author wrote us to agree with our review, and evidently as a result, decided to delete this webcomic altogether.

Crude and scribbly black-and-white characters (sometimes with color accents) with little to no attempt at consistency or proportion, and copy-pasted backgrounds for pictures that have them. Speech balloons are various colored shapes with various styles of colored lettering, depending on who is saying what. Also there are words without balloons, suggesting either indistinct shouting or somebody's inner thoughts.

The animal characters all wear human-style clothing, whether they do so in the actual Looney Tunes universe or not. 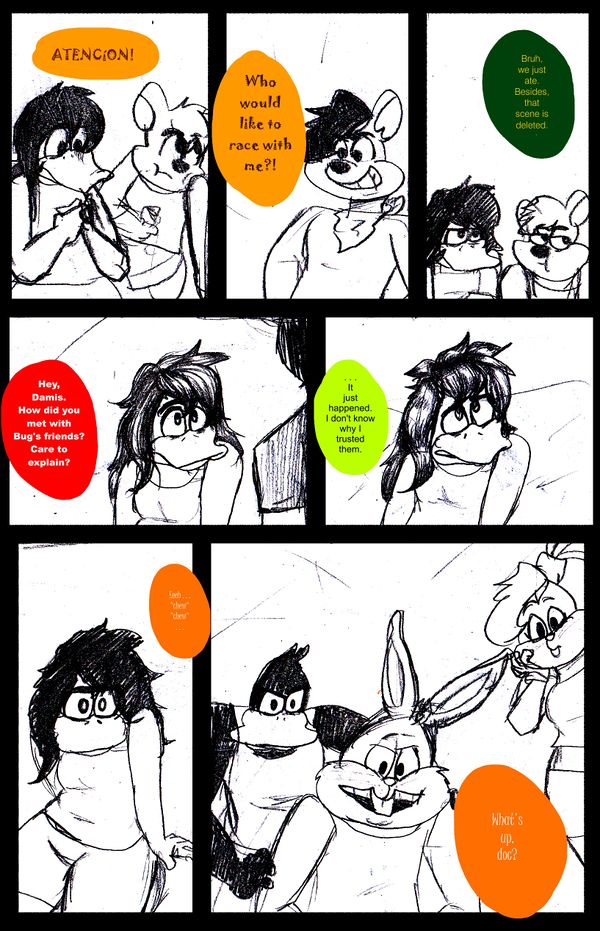 The webcomic's art style stays that way throughout its run.

The author states that the webcomic is about Looney Tunes characters helping a human girl. Except that shortly after the girl meets the toons, the webcomic stops covering her and the story turns to the topic of "inspirers" and "creataturas" without really explaining what those things are and how they are relevant to the story (shades of Stalag '99). Then that is dropped for the story of intrigues among our protagonists (who aren't given names) at a school. Then the story turns to Martians at the school (Marvin included) and their relationship with Earthlings, and that is dropped for the story of the feline protagonist and her abusive relatives and how Daffy Duck has a home next door which serves as a refuge...

Random enough for you? The webcomic cannot even adhere to a single story thread for any length of time, but vacillates all over the place like Furthia High, and even then there are numerous series of pictures where basically nothing happens, then all of a sudden something completely else happens. Basically the whole thing is a dreary soap opera where everything just drags on and suddenly things pop up without any explanation, and just as quickly disappear. There is no sense of overall development, just a stew of events that don't really follow a pattern.

The "Imaginatio Wiki", where the anonymous author explains what their whole project is about.

Eric W. Schwartz may rip off Looney Tunes-style artwork in his Sabrina Online webcomic, but at least he can draw it properly. David Hopkins may have a ridiculous idea in trying to use badly-drawn and silly-looking cartoon animals to convey a supposedly deep and meaningful story in Jack, but at least his scenario and characters are his own and not anybody else's. But this webcomic is purposely meant to be a Looney Tunes fan fiction, using Bugs Bunny and related cartoon characters, and even goes so far as to use a modified version of the Warner Brothers logo at the top of each page.

The question is why. Looney Tunes cartoons are fast and fun, but the tone of this webcomic is slow and maudlin. Are the brief appearances of Foghorn Leghorn and Speedy Gonzales supposed to be for comic relief, since they play no real role in any storyline? Why is Pepe lePew brought in? Just to show everyone what a jerk he is?

In summary, Looney Tunes Reborn is nothing more than a gimmick, and not even an intriguing or entertaining one. It uses Looney Tunes characters in a dreary scenario that has no resemblance to any actual Looney Tunes-type cartoons, and the story vacillates from one thread to another and then another without allowing a single one the chance to actually develop. (Why do the Martians consider Melodia a traitor? No explanation is given.) The whole thing looks like Jack without the sex and gore, except that the story arcs in Jack at least have some coherence.

One other thing I should point out. The webcomic's pages have a vote counter-and I noticed that not a one of the pages received any votes at all. Does this thing even have an audience?