Ryan Sohmer's Least I Could Do is easily one of the most recognized comics out there. That comic made me curious as to what other works the LICD group had done over the years. What I found was Looking for Group, a comedy comic that's based in fantasy pop culture (Lord Of The Rings, Warcraft, etc.). I read over it for a while but quickly found that what was presented here was a very boring and overrated comic that quickly turned from comedy into action adventure drama.

Let's be fair here: Ryan and Lar do make quite a capable team, but from the first page onward, I noticed this comic's biggest flaw: A great abundance of text/exposition/dialogue. Immediately afterworlds, we're introduced to the character Richard, along with his wacky habit of needlessly killing people. Of course, this is done for comedic effect. As I continued to read, I noticed how erratic the pacing in this comic was. In the first 30 pages, there's three different battles with only a page or two between them to slow things down and pour in some story. Bring in some action scenes that are almost always shot from the hips up, have Cale cry about his innocence being lost while not giving an overall damn about what his group is doing (except for what Pella does) and you've got a clusterfuck of confusion, poor character development, and an overrated story!

Let's start with the characters first. Now in the first story arc, nearly every character is introduced. Here's a list of them:

Unfortunately, most of the character development is forsaken in favor of moving the story along at a break-neck pace. The story here is they search for THE SWORD OF TRUTH! However, that plot device is dropped while a new plot emerges. It is really hard to get into this story for a number of reasons: the characters were unrealistic (in terms of personality), the story is very poorly thought out, and too many cheap pop culture gags. However, if anything is to be truly blamed, it's the dialog. Shakespeare once said "brevity is the soul of wit," which means that if you can tell the story without dialog, DO IT! Nothing ruins a comic faster for me than when it's drowning in word balloons, especially when the pages are crammed full of panels to begin with. More dialogue doesn't always mean more story mind you, as it's quite possible to tell a story without anybody speaking a single word to one another. Better comics like Dr. McNinja have been able to do this to great effect.

Did I also happen to mention that Richard is the Mayor of a town of undead villagers and he has a huge army? Guess I forgot.

Originally, Looking For Group was intended to be a comedy. From the first strip, the main character of Cale was comically burned to ashes. This, however, took a back seat when the writer decided to make the comics more dramatic. This is usually a very very bad idea, but I must admit that this was done so quickly that there were only a few comedic pages before the story took this turn into Cerebus Syndrome alley, so that can be overlooked to an extent. Unfortunately, the comic is still firmly rooted in it's comedic base as is the case with Richard and his wacky antics. It's so off putting, however, as one minute there's a song and dance or some pop culture icon being the butt of a terrible joke, to Cale weeping over a dead ghost. The writing is so schizophrenic that one moment you enjoy the jokes and humor, then the next moment you get a slap in the face as we're plunged back down into depression.

What's worse is (yes I'm diving back into this) the characters. We know little to nothing about Cale except that he's a bleeding heart douchebag, and Richard ends up hoarding the spotlight and ruining the mood most pages try to make. The female characters seem to be properly developed, but old habits rear their ugly head (see picture below and links above). I gotta admit that the writer can sometimes hammer out a decent joke, but again... bad habits are hard to break, and one liners are pretty fucking stupid when that's the only joke you got left. Overall, Looking For Group is much better than the writing in Least I Could Do, but to me, that's because the ego wanking is kept to a minimum. 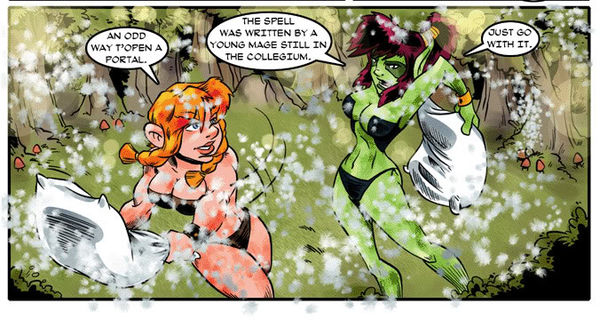 Yeah, it's no surprise to me that Ryan put this in his comic. Nothing says funny like a sexy pillow fight!

EDIT: User Undeadite just recently pointed out a strange anatomy quirk, here's what he has to say:


The line work on Benny in the pillowfight panel on this wiki suggests that she has a sort of deflated abdomen. The last time I saw that was in a photo of a mummy, and that's because the mummy didn't have any organs and was, y'know, dead. Yeah, that's such a turn-on!

Lar De Souza isn't a bad artist. He can draw a person and make it look like a person. The art he provides is great, but... the first thing I noticed with this comic is that the guy crams an ungodly amount of panels into a single page. This often limits the space you have with your art, and Lar here is forced to draw each character from the waist up. With a comic that focuses on action and storytelling through the images, you need that extra space! At times, he's allowed some room for more detailed panels, but he has no idea how to structure a page. The funny thing here is that there's no room for the dialog either, and at times he's forced to cover up his own art with a speech bubble. 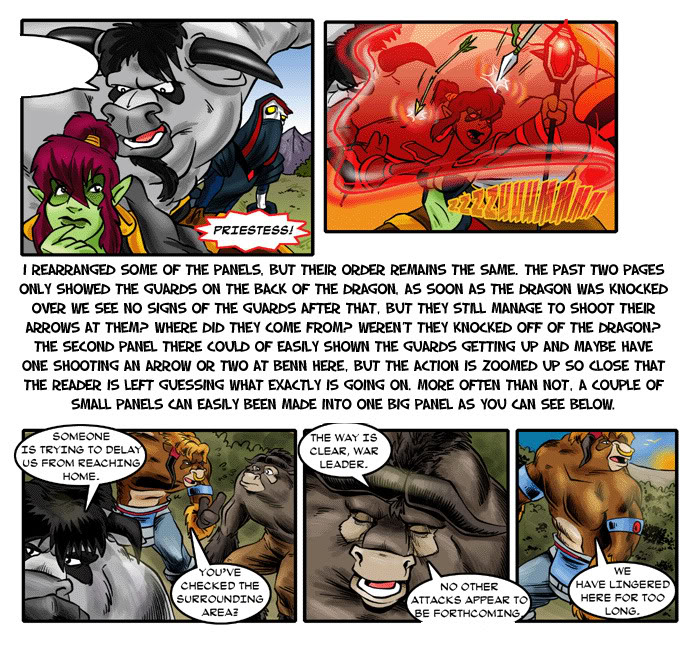 Aside from that, there's only two things that bug me about his art: the coloring of the characters and their expressions. For the colors, they're too bright. Take a look here for example. Everything is as bright as the morning fucking sun. He does get it right at one point with this night-time shot, but that quickly changes in the same page as a red glow illuminates the characters while completely leaving the background the same. Admittedly, I don't know much about color theory as I hate coloring, but I do know that a red glow would make almost everything that it would illuminate at night look red, including the trees and background! For his expressions, well, whenever I look at some other comics and how they display emotions, they often show some teeth. Here we usually get that sorta expressionless look on every character (aside from the occasional smug, smart-ass look) and they always look like they are missing their dentures. You kidding me here? Haven't you seen the review on Least I Could Do? Well, I suppose I could give you my two cents here. Ryan, to say the least, is an egomaniac. He will, all too often, be quick to rub in what success he's had in the face of those whom he deems to be lesser people as shown in his other comic when he happily mentions how he updates regularly, doesn't use MSpaint, and how he's tired of how he's the only hard working guy in the comics industry and every one else is a drunken peon (smug warning: don't click those links if you're prone to punching people in the face). On top of that, he's so misogynistic that it's the reason why one of his previous artists quit. That artist even sent us a message saying so. The guy's got the appeal of an angry rattlesnake and he's just as venomous to boot.

As for Lar, I don't think he has any dignity left in him as he continues to work for this guy. It's astounding that he has no objections to the type of shit Ryan pulls. I mean, for Christ's sake, he's lashing out at other comic artists for no fucking reason at all in those strips! Can you honestly draw those comics without thinking "Hey, do I really want to draw a comic that allows the writer to tear people down in order to fortify his already inflated ego?" The man pretty much said in those three strips "I'm the hardest working man on the planet and everybody who isn't me is shit!" which is ballsy of him because he doesn't make the comic by himself. In the end, however, Lar is just a doormat, and I can't respect that.

It'd be too easy for me to say that this is total crap as there's plenty of potential here for a good comic (which sounds like a stretch considering who made this comic). It's nice to see Ryan not spew his wish fulfillment into the open, but his bad habits are still here. The story has poorly developed characters aside from the warlock, Richard, who's a Gary-Stu. Combine that with an overabundance of dialog and exposition that makes the comic more of a novel with pictures, and a lack of a decent pace for the story, and you've got a comic that's hard to digest. The art is decent, but the expressions of the characters are often awkward, it's always always brightly colored even when the mood and setting calls for different tones, and cramped panels make understanding the action a difficult task. Highly overrated.