Look What I Brought Home!

Surfing on the internet, I found a comic so horrific that reading it is a challenge to anyone's sanity. My mind went temporarily blind at the index just by the hideous drawing. It's like my own brain tried to prevent me from reading the comic. I persisted; I wanted to see how bad this could be.

This comic is so bad, I could almost smell it. A stench of rotting flesh, diarrhea and pus, floating in a landfill. It was so bad, every page was a battle against my body to move on, an animal reflex against torture of this caliber. So bad, my doctor has certified that I got brain damage, heart palpitations, lung corrosion, and some mild cirrhosis, all from reading it.

I've 20 years less to live now. I can barely speak past gibberish. But you must know. You must be warned of this torment. Maybe then you'll resign to calmer activities, like listening to loud metal music while trying to sleep. ABANDON HOPE ALL YE WHO ENTER HERE.

On Monday, February 8, 1999, a horrific offense to humanity was committed. This offense, yet unmatched in scope, was so sinister in scale that it elicits emotions of terror and panic just at the very thought of it. This offense was the herald of the downfall of civilization. This offense was so horrific that the human mind can barely even hope to fathom it. This horrific offense of which I speak was the first strip of Look What I Brought Home, as it spawned itself from the deepest layers of hell. And, directly from these deep layers of hell, was a joke about an exposed nipple.

After this badly drawn horror, almost demonic by nature, the world stood and waited, hoping that nothing more would emerge. But, two days after the beginning of this comic, another strip was written. And, as this gruesome terror of a webcomic continued, the world witnessed in horror as jokes about farts and rape were made.

At last, on February 22, 1999, the world's fate was sealed. A sight is witnessed on this date that is so disgusting that any human being who witnesses it would immediately lose any trace of sanity. The cow Bess was seen naked. I would not recommend clicking on that link if you value your sanity.

The story and plot of LWIBH is a general series of story arcs. Over time, the arcs get longer and more boring to read. There are so many story arcs in this abysmal comic that I will only highlight a few. These arcs I shall highlight will be rock bottom for this comic. 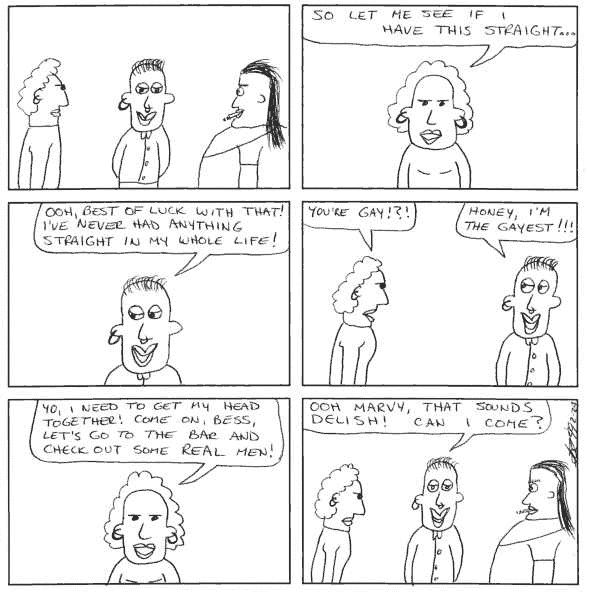 This is early on in one of the most appalling story arcs in the entire comic. The idea is that the blimp Bess and the evil demon Deshondra needed a roommate to have sex with. The roommate arrives...but he is gay. Over the course of this arc, it slowly gets more and more offensive to gays. This arc also has a healthy dose of incest and hairy ass. At the end of this arc, the only emotion I have is a state of shock mixed with rage. The amount of offensiveness in this arc is inexcusable, especially considering how blatantly unfunny it was.

Then, in a later arc, a character named Cuntio is introduced. And she's a super-selling rap artist. And, most horrifyingly, she's a stereotype. So, whore Deshondra Emily decides to be friends with stereotype Cuntio. But Cuntio turns out to be a lesbian, for reasons mainly relating to the creator's obvious desire to offend people. This creator manages to be horrifically offensive. It turns out, "Cuntio" is a incredibly retarded name philosophy. As I reel in horror at not only this arc, but all of the arcs from 1999 and 2000, I make my way further along.

And start to vomit blood. I hope you didn't click on those links. If you did, I am sorry that you had to see that.

In 2001, the storylines somehow become even more retarded. A planet Bess starts shitting modern art. In the end, the French stereotype takes the "art" and eats it. A 2002 storyline involves Emily's jaw getting stuck on a man's wang. Then, Satan some evil girl bites off a doctor impersonator's dick in 2003.

For a while, it seems that Scott-O and Amanda have decided that they don't completely hate humanity, and there is a 2 year hiatus. Then, there is a ill-conceived spin-off in 2006, and the comic seems to be back in full force by 2007, now offensive to retards and midgets. The comic finally reaches its last strip on January 15, 2008, after a nine-year run. During this 9 year run, this horrific comic somehow gained a fanbase. The fact that a fanbase could exist for something like this says several things about humanity as a whole, all of them bad. 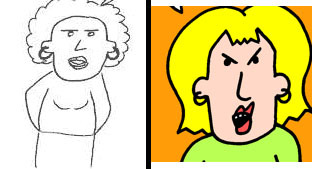 This is the difference in art between 1999 and 2008. At first, you'll think that the artist has improved greatly over time. But no! The only real changes are: The lines are thicker and drawn with computer, and that the comic is in color. The lineart has not improved at any level. The art is bad, and has always been bad. From the worst photoshop filters I've ever seen to a nonexistent comprehension of how to draw, the art is unforgivable.

As I viewed this webcomic, my eyes started to sizzle, as eggs would on a frying pan. I started experiencing great head pain as my brain short-circuited due to the quality of the "art". Is the drawing of this comic truly "art"? It looks to me more like Scott-O ate a bunch of Taco Bell, and took an explosive shit on a sheet of paper, or, later on, a computer screen.

And sometimes, the art just makes you puke out your internal organs.

I've shitted much better written stuff than this. In one early story arc, ultra-uber fatass Bess meets another ultra-uber fatass a guy she can relate to. And it turns out that guy is a fatass woman. So, the arc ends in a typical tasteless fashion, by insulting lesbians. I have two minds about this. On one hand, I love making fat jokes. On the other hand, this story arc is horrific, offensive, and generally awful in every way, shape, and form.

In a later arc, Bess's lesbian mother and badly named character Cuntio decide to move to Lesbos and become country singers. Compared to most other arcs, this isn't too offensive. Just retarded. Retardation is characteristic of the later comics.

And, now, lets take a look at the characters. Fucking huge thing Bess starts out as a fatass slut and eventually cleans up her act to become fat all moral-tastic and some shit. As a result, I realize that I wouldn't give a shit about her unless she wasn't so huge that she blotted out the sun. Meanwhile, Emily is a horrible person who commits incest with her brother, uses puppies as sex toys, advertises her STDs, and is a generally terrible person. Trust me, this sounds way funnier than it really is.

Among other characters, there is Emily's brother Clem, who occasionally drops in for incest, and the catatonic man Emily fucked, Blank. Also, there is Bess's mother, who is a lesbian, and her long-term partner, Cuntio! Seriously, there is a person named Cuntio! That is misogynistic and generally retarded. Then, there is Dr. Shamrock, who enjoys malpractice, and after that, a bunch of characters nobody gives a shit about.

And now, my main issue with the writing of Look What I Brought Home, the unfunny offensive "comedy". Offensive humor can be good if the punchline is actually funny. But, in LWIBH, the punchlines are genuinely unfunny, only leaving a feeling of rage about the offensive content of the gags. Seriously, these jokes are just terrible.

Apparently, Scott-O has died. And Chris Crosby, the CEO of Keenspot, has decided to do a service to the dead by endorsing this comic. That would be fine, except that the comic is shit. For God's sake, he has a character named Cuntio! By calling himself a fan of this comic, Crosby is making himself look like an idiot. Also, there was a female involved in the creation of this comic. This may seem shocking, given how misogynistic this comic is.

Just because one of the creators is dead, and a female helped make this comic, doesn't make it good. It doesn't even make it passable. This comic is horrific. It is offensive on all levels. And nobody should pretend that such misogyny is excused because a female helped to make this comic. Crosby shouldn't act like this is a good comic just because the original creator is dead.

Do not read this comic. Ever. This is not a critique, because the comic is dead enough that nobody will listen. This review is a warning to whoever may find this comic one day. If you are still not convinced, then read this. Poop jokes are the sign of comedic retardation. This comic is a horrific piece of shit that just needs to be wiped off the internet. To me, there is nothing more horrifying than the fact that I had to READ it. That is not a task any individual wants to endure, and, as mentioned at the beginning of the review, undergoing such a task will deprive an individual of their health and sanity. The only positive thing about this comic is that it's dead. So, once again, as it can not be emphasized enough: DO NOT READ THIS SHIT!!!!