Before we begin with the Webcomic, I must introduce you folks to "oekaki", which is the Japanese word for drawing. In general usage of the term on the internet, it refers to drawings made with simplistic computer software. Combine this with the furry fandom and it links to the word "kemono", which is basically the Japanese term for the furry fandom.

Why am I telling you this? Because several furry artists led by one Tobias Amaranth once produced a website called Kemonoart.org where they would practice their oekaki artwork without any restrictions. In other words, Rule 34 artwork involving multiple franchises from anime to video games, from tentacle fetishes, and perhaps more disturbingly, lolicon, were drawn by several artists of varying talent. However, by 2009, the website was abandoned, in part because their forums got overrun by spam. Nowadays, Oekaki has become overshadowed by artists performing their work on Stream.

Before all of this happened, one of the kemono artists called Mariano created a webcomic called Live to Tell and was the one artist that managed to get the most traffic reaching millions of hits, thus preventing his work from dying. Despite all the other artists leaving the site and the site being overrun by spammers, Mariano persevered and eventually relocated to FurAffinity to continue his work, redrawing his entire comic in the process. While a webcomic project surviving all this is undeniably admirable, it still doesn't hide the fact that the comic suffers from anime cliché's and caters to those who enjoy looking at panties worn by girls who haven't reached legal age.

Once upon a time in a magical world of kemonos named Zerion, there was an evil force of a vicious monster named Omega who had just started to threaten that world. In this world, a family of anthro wolves which ancestors were great warriors but now they love peace, were living in a distant forest where Omega's menace has yet to reach. This family consisted of the father Silver, the mother Lune, the big sister Vulpa, and the little sister Ruki. They lead normal lives and Ruki never suspected that she was fated to save the world. At the time she was living a wonderful childhood with her family, until one day...

The Story is your typical "Epic Fantasy Adventure" that ticks the cliche checklist of other fantasy adventures that you've must've read, watched or played somewhere in your life. It has everything you might've expected from Fanservice to tragic backstories to shipping ideas.

In Live to Tell's case:

When I look at the Original version on Kemonoart.com the first page makes me think that this was the first drawing Mariano has posted online. I could go into detail about how each face is disfigured badly, (on occasion characters may have their noses missing), how much Vulpa's anatomy looks awful on certain pages, along with how rough every character looks or how on two occasions Mariano forgets to add injuries where there should be. But as the story progress to Page 101 it is clear that Mariano's artwork gradually improved.

Eventually Mariano redrew all of his pages and reposted them on FurAffinity. Looking at Page 1 shows a tremendous improvement compared to his original version on kemonoart.org: Most of the facial disfigurations are gone and Vulpa's anatomy has definitely improved. Despite all this, Mariano's new art style, compared to his Kemono version starts to become less of an improvment and becomes a game of spot the difference. Especially when Mariano makes "Ninja Edits" such as Omega's Palace. Beyond that, there are still a number of problems. For one thing characters at a distance are still horribly detailed. Plus, Mariano has also overlooked a couple of details when he decides to change appearances, e.g. There is a Hyena gang leader, whose hands in the original Kemono version are spotted hands, in the remake her hands are now muddy, but in one page they become spotty again. 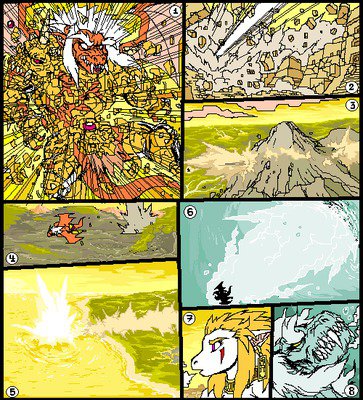 This picture doesn't have an underage panty shot, anyway.

Beyond the Cliche nature of the comic, Live to Tell suffers from the following problems:

Live to Tell "borrows" various elements from certain Anime franchises. In my case, it keeps reminding me of the Anime series Dragonball Z from Naming attacks, to curb stomp battles to the extremely subtle art of flipping the bird.

The Characters themselves also have concepts that are clearly copied from Dragonball Z:

Ruki: Has a secret untapped power that is triggered by the threatening of her loved ones. When first triggered she doesn't remember doing it. This is clearly a copy of Gohan, whats more, she clearly resembles Lou Lupus from Final Fantasy Unlimited.

Wolfu: Feels like he a four-legged Yamcha. He has a fear of females and has been the butt monkey by being the receiving end of various attacks that render him unable to fight.

Urara: She's apparently a princess of a proud warrior race that was destroyed by Omega. She enjoy picking fights and has an arrogant attitude. This is as if Vegeta was a female demonic Wolf given a third eye.

It isn't just Dragonball Z that Live to Tell borrows from.

Even if you shed some sympathy for Vulpa and Ruki because the first thing Omega does is kills Vulpa's boyfriend Spinel, tosses him at them, kills both Vulpa's and Ruki's parents and after being defeated by the two then destroys their village: That sympathy will deteriorate because Mariano recycles this backstory for every main character. To prove my point:

You might've noticed that I reference Omega several times. Omega is the primary antagonist of Live to Tell, but to say that he is a bland villian is a crushing understatement. Omega's diabolical sheme is, you guessed it, take over the world. Everyone considers him the ultimate evil, yet all he does in the comic is destroy villages. Even one of his Elite Hunters after defeating Urara just simply destroys a village that Urara prevented Omega's army from attacking and it ends there.

As for the cities he turns them into chaos with his 'pollution' as its being called. When Vulpa asks an old man what's happened and he explains every detail ranging from Child prostitution, Gang Violence and how women are considered nothing but sex objects.

I can honestly say without hesitation that I can think of even worse atrocities in my sleep then what Omega has ever done in this comic.

Actually that wouldn't be fair, especially when they become Spanish Conquistadors. What's next? The Cheka or the Kempeitai of the Empire of Japan?

Live to Tell is also plagued by its script. Not only does the comic's dialogue feel like it belongs to a Anime RPG, as it drags out sentences much longer then they should, there are countless punctuation errors, spelling mistakes and incorrect words used in certain sentences. I quote an example from Page 53:

Wolufu: Hey hey!, W-what is your problem, girl? I know you're thankful for me saving you, and all, but don't you think you're exaggerating a bit much? You're acting like if we're engaged or something!

Vulpa: Heh, isn't obvious? You not only gained her gratitude from saving her, but you won her heart, as well. I sure do hope you won't take advantage of her innocent feelings for you or I won't be able to forgive you! He he he he...

Wolufu: Uh? What are you talking about? I don't understand know what you mean...

Wolufu: Thinking: Errrr, they must have suffered quite a bit from the deaths of their friends and family...

I could argue that its in part due to English not being his first language and that translating what he means to say can be extremely difficult, but he also resorts to German as well and even his grasp of that is extremely poor. The only positive that must be said is that this isn't unfixable as Mariano places the script outside his pages. So the errors can be fixed.

Like many epic adventure stories, Mariano hopes to help his work stand out among the crowd with fanservice ranging from boob shots to panty shots. However, Mariano has been showing panty shots of Ruki, who I should mention is supposed to be 12 years old.

That's disgusting. Look how he drew her hand!

He also does this to Urara while she's fighting Ruki. Keep in mind Urara is probably only one year older then Ruki.

I don't really know what nationality Mariano comes from. When I first read his work I assumed that he was German. But as we established that even his German is terrible, that's simply not the case. I have to assume that he is Spanish as he has made comics with Spanish Dialog and as far as I can see that is the only language that doesn't have any translation issues.

Is there anything positive about this comic? Well the characters don't drop what they're doing just to have sex every 3 pages. In fact, none of the main characters have any sex in the comic, neither does it constantly tease us with boob shots without nipples, neither does it drop its story to preach political ideas or bore us with long walls of text that we don't wish to read. But in the end, when it's all said and done, Live To Tell still follows the stereotype that exists in the internet culture that Furry Comics promote nothing but pornography and Mariano will be always be remembered for that.