I stumbled upon a comic so bad in every sense that I just HAD to see if it had a BWW entry, and surprisingly it didn't. It's basically a webcomic made of bad art and extensive strawman dialogue (you may see the word strawman a lot here but hell, I can't describe it in any other way).

At first it was a normal webcomic of graphical jokes, but towards the end of 2016, the author went full Social Justice and somehow managed to even lower its art quality. 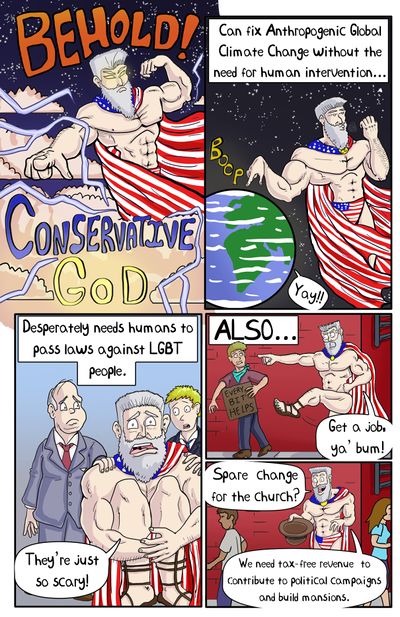 There is no set story, aside from one or two characters having more than one appearance. It is yet another "we are right, you are wrong and dumb" kind of comic; literally every character who isn't trans or LGBT friendly is depicted as utterly stupid, violent or someone who is always crushed in an argument. Ironically, she made a comic mocking people for doing exactly what she does, and it almost looks as if she was self-aware for a moment and made it out of guilt. 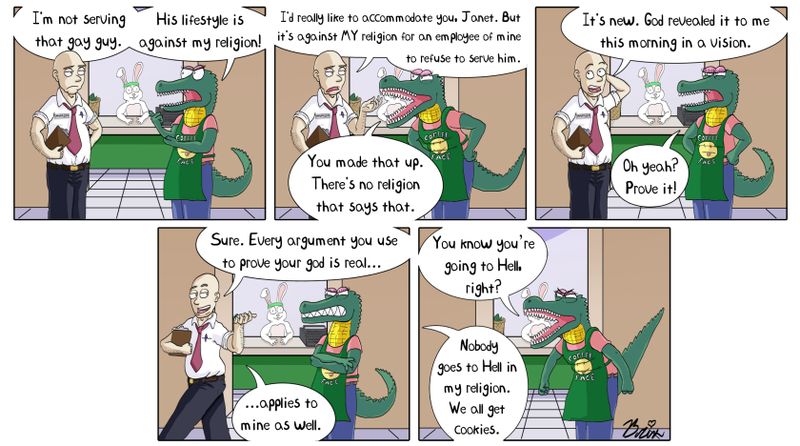 The quirky progressive guy won the argument? I didn't see that one coming!

Just like the comic, the art started as decent and became Sonichu if Chris-Chan knew body proportions. And even then, when the author tries to make a body outside of her normal body type it is a complete mess. The backgrounds are simple enough when they exist. Not much can be said about them as the strips are generally close-ups and you don't see too much of the background. The main reason this webcomic caught my eye is the awful faces. Really, I study medicine so my drawing skill stops at a mediocre diagram of a cell, but even then I could draw better faces. There are some people that won't do the effort to draw more than one face, but at least that face doesn't looks like an edgy twelve-year-old DeviantArt user.

It is also full of characters that scream that they are gay, but that may be the point of it so it's not that much of a sin.

As I may have mentioned before, this is Strawman: The Comic. Really, every "good guy" is this smug wise beyond their years wisecrack while every "bad guy" is this individual who is either stupid, violent, or incapable of debate. Just imagine what would happen if Sophie Labelle stopped making comics with a dictionary on hand, only used words she understood and didn't really make an effort to make a point. 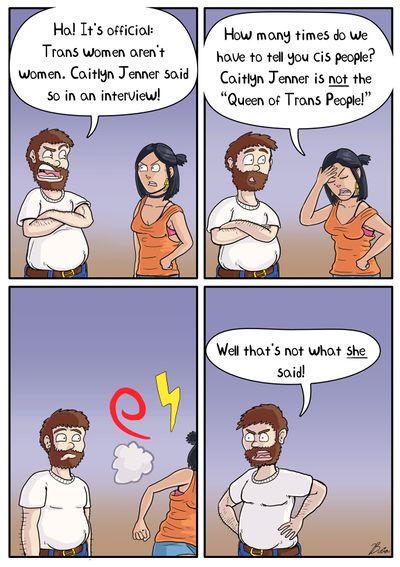 The whole writing of the comic can be reduced to this: Stupid person and smart person.

As I said, this is not the worst "pro" LGBT (as it makes them look bad) webcomic out there, and I doubt that anyone will be able to take Labelle's throne on that category. However, both its script and its art are totally hideous, and I certainly can't understand how some people could enjoy it in any way or give her money (because hey, you can't make a bad webcomic without begging for money at some point). The author may have good intentions, but the results don't reflect that. I don't have much knowledge about Sabrina, but just looking at the "arguments" you see in the comics, I'd say that she's not really willing to listen to reason, and this comic will always be bad.