Life For Death was recommended by BWW forum poster "Lynchburg", who had harsh words for its artist and her "egomaniac" tendencies. From what I've yet seen of the author, this isn't the comic's biggest problem. Its biggest problem is really, really simple, actually; Death is simply a mediocre comic, with mediocre art and mediocre writing.

Ho-hum dramedy/comedy-drama/mock epic type of comic. By this I mean you'll see bits of comedy if you go through this. You'll also see boo-hoo sad things happen to the characters. You'll also see things similar to (but not quite at) mock-epic style. For example, all of its characters are the cliche gods and goddesses you'll see in every ho-hum Sabrina the Teenage Witch knockoff from here to the rest of Eternity. It's kind of like being in plotline Hades, mundane and boring and cookie-cutter to the point of psychological torture.

Whenever the artist stopped drawing the comic herself and switched to the oft-used and completely lame MS-Paint drawing style, any hope for improvement to the art died. When we see the mortal character's shirt reads "Otaku Academy Swim Team", we know any hope for this not slavishly adhering to the obnoxious anime stereotype is pretty much dead. Whenever we see the Comic Sans MS font used for misspelled words and poor grammar, we can be pretty sure the writing's going to suck.

So yeah, basically "comic 0001" is the failure point, with the two "intro" pages being our Great White Hope for better things that would never materialize. While these two were not what anybody would consider "great", they at the very least had room for improvement. Whereas if you go the MS-Paint route, you're not going to get rid of... well, the MS-Paint.

The MSPaint is truly bad. Wherever it rears its ugly head, you can be sure the comic is going to suffer immensely.

That's not even to say that MSPaint doesn't have its place. I mean, if you're doing a truly great sprite comic or drawing a video-game oriented webcomic and you're using the pixellation to your advantage and taking artistic advantage of MSPaint's limitations to help you make convincing video-game-esque backgrounds or something, good for you. Whatever.

But in a comic like this? UNACCEPTABLE. This is what I was talking about when I discussed Eric Schwartz' using monochrome bitmap format in my review of Sabrina Online, for those of you who commented on StumbleUpon telling me "Hey, since when is 'monochrome bitmap' a reasonable critique for a webcomic?". Well, since monochrome bitmap images look like the one on the left. It's pixellated and choppy. It looks cluttered and drab. It makes me feel like I'm playing an old Nintendo game, or using an Amiga computer. It's inappropriate for an actual piece of supposed artistic expression. 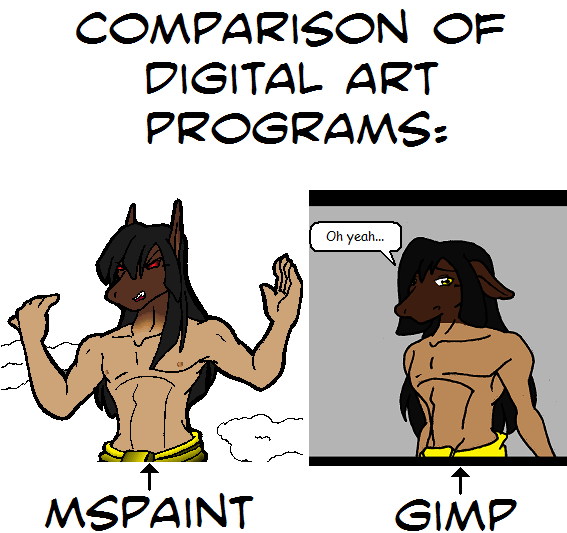 What makes it the worst is that it's actually fairly well-done for MSPaint work. Imagine in your mind the above done in a paintbrush and ink, or on a digital tablet, and tell me that MSPaint is a good image program to use for a webcomic.

There are other things similarly reprehensible. There's the classic animu sweat-drop, singularly unattractive and emblematic of a lazy and half-hearted attempt at emotion. There's anatomy problems, especially when drawing women or when characters are in motion. There are bland, unattractive backgrounds.

And, as in every blandly-drawn comic I've yet seen, the characters' mouths often end up in their cheek, exactly where they don't belong. Yuck.

But for me, nothing is more reprehensible than the MSPaint. It's just lazy and ugly, and shouldn't be used. I've used it, others have used it, but once you get serious about drawing something worth reading it's just unacceptable. Get rid of it.

Boring, boring, boring. Everybody at the Bad Webcomics Wiki has been told at some point that they need to pay more attention to the characters. News flash, webcomic artists of the world: It's not our job to tediously document every character in your comic. It's your job to make us remember your characters' names. When I watch Spirited Away, the plot is fascinating and enthralling enough to make me want to remember the characters' names. When I read Lackadaisy Cats, I want to know Freckle's, Ivy's, Mitzi's names so I can tell all my friends "Hey, you remember that awesome character in that awesome webcomic?"

Whereas I have no interest whatsoever in knowing the name of "Boring McRandomCharacterNumberOne." In this case, "The Angel of Death." Yawn. Snore. Apparently you don't care if I know who these characters are either, seeing as how you lack even a half-decent "Characters" page. That's OK, though, because the only one I give a shit about anyway is... Oh wait, I don't care about any of these characters, because they lack backstories and personalities, and even the one that challenges the Death Angel herself has nothing descriptive about him whatsoever besides a shirt that reads "Otaku Academy Swim Team."

The only character with any semblance of "character" about him (and I'm being generous, here) is Anubis. Anubis says in an early strip, "I couldn't care less about his death, unless... there's a party involved?" and that's the extent of the character I get from him. Apparently, he's a party animal (HUR HURRRRR GET IT HE'S PART JACKAL!)

(By the way, did I mention Anubis looks like a horse in this comic? Because he does. Just wanted to throw that out there.)

The rest are as flat as day-old Coke left out in the sun in Tennessee for the Sun God to have his way with. What is the personality of the Death Angel? Is she ditzy? Smart? Engaging? Socially retarded? Affable?

Nathaniel Sone, same way. Apparently he's on his school's (sorry, Academy's) swim team. So what's he like? Is he just a stupid jock? Is he secretly gay? Is he effeminate or masculine? Does he like to put gum on his bedpost overnight? Is he class valedictorian? Class clown? Is he manipulative?

As with the question of how many licks does it take to get to the center of a Tootsie-Roll Pop, the world will never know the answers to these questions. These characters are vapid, dull, flat, uninteresting, and completely forgettable in every way, shape, and form. All we know is, some member of some swim team decided to make a pact with some Death Angel nobody cares about, and she accepted, and now she's trying to get along in the world.

Wake me when the author does something interesting.

There are two authors for this webcomic: Dakota Allen, the main author who was not given his own page, and Angela Prien, our artist and part author. Prien, who has gotten her grubby little mitts onto every comic on this site and seems to be the "alpha female" of this site, is twenty-six years old and has written a webcomic for every single genre she can think of. You've got it all: MSPaint noir dramas where the residents get around in clown cars, superhero adventures where the buildings and streets follow not a single fucking rule of perspective and the apparent superhero dies in the third strip, and of course the obligatory comic about chinchillas. Some choice quotes from her FAQ page:


Where'd you learn to draw?
A:


I taught myself. I never took an actual class. Yes, I know there are some things wrong with my art, but I only get better as I progress. I don't think any class can improve that.

Or in human speak, "Yeah, I'm too lazy to try to take a community college art class to improve my drawing."


What programs do you use to colour?
A:


MS Paint. That's right, the crappy piece of 'art software' that comes with the computer. I occassionally use GIMP to shade...but I'm not very good with it. I do have the patience to do the shading as I did here in Paint. Sorry it wasn't something more special. I can't give any tips that a 5 year old couldn't tell you about colouring.

Again, "Yeah, I'm too lazy to learn how to use Photoshop or a good drawing tool. I'm perfectly happy accepting a halfhearted MSPaint work."


Why do Kerri and Kimmi look so much alike?
A:
Hah. I'm not answering that one, yet. But there is a reason. It's actually not as obvious that they look alike in colour. But the original B&W version, they really did. And I got this questions a lot more then.

This version - the one I reviewed - is an improvement over her original work, except that now she uses MSPaint and stopped trying in any way. Hey, at least she "improved". If your "improved" ain't so good.

And finally, the best of all:


Why does Kimmi ask about Kerri's hair? Isn't white hair normal in manga?
A:


Yes, usually. But in my comic blue, green, pink and other such nonsense hair colours aren't natural. White is a natural colour, but only for older people or albinos, usually.

WE CARE THAT SHE FOLLOWS MANGA STEREOTYPES YES WE DIDDLY-DO

Not worth our time.