Bored and listless on the internet I began reading the #makecomics hashtag on Twitter one night. This, unfortunately, led me to Joeby Gibson and his webcomic: Lethal: Death Squad Uprising. I read every page and hated every panel. Every single panel. The hardest part about writing this review is forcing myself to not take things panel by panel, breaking each one down into the base elements of suck, and instead stick the broader themes of suck present. Lethal: Death Squad Uprising is the single most predictable, most un-researched, most lazy thing I have ever read in my life.

This comic has, and will always, suck. The downfall begins with the page design. The website looks like something from a junior high web design class. It is as boring and plain as the comic it hosts. It is also a pain in the ass to navigate, with no thought given to presentation, form, function, or consistency.

The plot summary available on the website states simply:

Set in 1985, follow the adventures of redneck bounty hunter, Lethal Johnson, as he wages war against a terrorist group known as The Death Squad.

Joeby Gibson, that's not even the half of it. You’re far too modest. Let's just list some of the plot elements you will encounter in Lethal: Death Squad Uprising:

And that is just a start. Lethal is the story of Lethal Johnson (yes that really is his fucking name. Lethal. Johnson.), a bounty hunter, and former commando, complete with mullet and '80s shades. When we first meet Lethal he is Clay-Pigeon shooting while surf-boarding. I'm not fucking kidding. Seems a new cult/terrorist outfit is in town and only Lethal can stop them. You don't even need to read the comic, take the above elements, think of the shittiest, most predictable plot possible, and I guarantee you - that what you have just imagined - is exactly what happens. All this and a shit-load of cheesecake female anatomy. 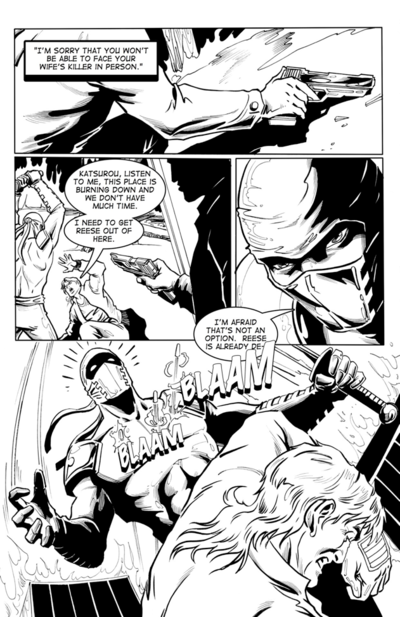 The artist on the webcomic, Rowel Roque, has technical ability. His art has that late '80s/early '90s Marvel style down. Not very original but he can draw. That is not to say he isn't without his problems. He uses a ridiculous amount of curved linear perspective, when it makes no sense to do so. Curved linear perspective should really only be used in a few very specific instances. Namely when you are looking directly up at, or down from, something really tall. Roque ignores this convention though and just throws it in whenever the fuck he feels like. Now either Roque fucking loves curved linear perspective, and I mean loves it, or Joeby Gibson told him to do it because he researched late '80s/early '90s comics and found that a lot of artists from this period over used curved linear perspective as well. I mean after all, the book is set in the '80s so this is possible. The idea, however, breaks down when you realize that there is no way Joeby Gibson has actually taken the time to research anything -ever- in his little life.

Roque, technically skilled as he is, also possesses little to no storytelling ability. Take for instance this page. In panel 1 Lethal has his arms at full extension pointing his gun at this dude, he is holding his gun straight out at eye level. Now that’s fine, but the very next panel the gun is firing and in panel 3 the bullet hits its target, IN THE NUTS. That means that either the guy is twice as tall as Lethal, or Roque has no fucking clue what he is doing. Roque can also be wildly inconsistent at times. For instance this scene, where a shotgun first shoots a slug, then, the next time it is fired, a normal shotgun round. Although to be fair some most of his problems seem to be are originally Joeby Gibson’s fault.

Another point which demands discussion, but which rarely ever receives it is the lettering. This is one of the poorest jobs of lettering I have ever encountered. The creators page doesn’t tell me who letters this piece of shit, but at least there is a colorist listed. Never-fucking-mind that this is a black and white webcomic, THEY HAVE A COLORIST. Anyway back to the point, which is that the lettering in this book sucks out loud. Sloppy, inconsistent, and confusing. Whoever among their number they have lettering should stop, go down the street to the neighborhood kid with the severe disorder of the nervous system, blindfold him, and then pay him to letter the book- because he would do a better job.

And now for the pinnacle of shit, beneath which, a river of shit flows. The writing. I loathe to even refer to it as such. It is hardly writing, it shares much more in common with masturbation. I don’t want to belabor this point, but this is the single most predictable webcomic, nay –work of fiction- that I have ever read. Every fucking thing about it the reader can figure out long before the characters in the story ever do. From the mysterious contents of these crates, to this obvious assassin, to the betrayal of every single person Lethal works with, to the stupid long lost twin shit, to the backstabbing ninja’s motivation. There is not a single thing coming in this book that you won’t be able to see from light years away. PRO TIP: Joeby, this makes your characters look retarded.

While I’m handing out tips, having newscasters explain any scene, and especially starting your book this way, is widely regarded as the laziest of all hack moves.

Let’s step back from Gibson’s total inability to write an engaging plot, and take a look at his total inability to write engaging characters. Lethal Johnson himself, is an action hero who never misses a shot, never fails to dodge his enemy’s bullets, always gets the girl, is seemingly highly skilled at every single thing in the world, and is suffering from a serious case of being ‘the one.’ I would, and rightly should, call Mary Sue, but I actually think that Gibson might be too stupid to write a Mary Sue. That is impressively stupid I know. In order to create sympathy for his completely unlikable lead Gibson does what all hack writers do: he kills off Lethal’s wife. This is just the start of the pervasive misogyny throughout this comic. From this wonderful motorboat scene, to the following sex scene, to the eventual maiming of Ms. Strokes (yes her last name is Strokes, his is Johnson, can you predict the joke Gibson is going to tell? I can.) Gibson has no idea how to write women as anything other than objects. Next time Gibson, set your story on a submarine or in a prison so you don’t have to embarrass yourself by showing that you have absolutely no respect for half the population.

There are so many problems with this comic that it is impossible to address them all without getting out a red marker and going panel by panel through the comic. I’ll direct you to a few more of my favorites and then be done with it. Favorites such as, that is not how swords work, and how the fuck is it ‘too late’ if you easily kill the guy, and why in the fuck would just not detonate the bomb right off the bat instead of wasting time and ammo you dumb fucking fuck?

Gibson earned his bachelor’s degree while studying film at Montana State University, Bozeman. After graduation, he traveled to Los Angeles and soon became a freelance Story Producer for reality television shows. His credits include shows for NBC, CMT, and Animal Planet. While keeping busy with his day job and planning a wedding, Joeby somehow finds the time to be the Writer and Producer for Lethal... and he hates referring to himself in the third person unless he is updating his Facebook or Twitter status.

Note that he calls himself “a writer/producer." On his twitter page he writes: "I'm a Very Important Story Producer Guy." I would write this off as being tongue-in-cheek but Gibson has already proven himself to not be smart enough to write with his tongue planted in his cheek. So, I’m just going to assume that this is his honest opinion of himself. Note also that he is a reality TV producer. For those of you not in the know, a producer on a reality TV show is a writer, they call them producers because the show’s aren’t supposed to be written but they are. Producers write scenarios, and sometimes even dialogue, for the only people on Earth that have less talent than they do- the reality TV star. This means, that with any luck, Joeby will soon fuck off back to writing things for the cast of Daisy of Love to get in fights about.

Finally Joeby Gibson has the stupidest publicity campaign going on write now: the first 500 people that follow him on twitter will get their twitter username printed in the Lethal: Death Squad Rising/collected trade paper back (he calls it a GN but this just shows that he has no idea what the differences between a TPB and a graphic novel are.) At first I thought “now why in the fuck would I ever want my name associated with something that has made my life worse in a quantifiable way?” But then I realized that we could all register a bunch of twitter accounts like “JoebyGibsonIsATool” or “ThisBookSucks” and get them printed in the book. Go do that.

In conclusion, click the link on this page and go read the webcomic, give Gibson lots of hits. The hack doesn't have Google Analytics on his site but he will be able to see where the traffic is coming from, hopefully he will track it back here, read this and stop. That’s all we can hope for. Joeby, please stop. (Okay, Joeby heeded our advice. He not only stopped his webcomic but even erased the damn thing. Yay!)