I found this comic when the two main characters (Andy and Jeff), were guests on the comic strip Woody After Hours. Since I liked their guest appearance (starting here and continuing for five strips after that, if anyone wants to see), I assumed I would like this comic. I was completely wrong. Although they don’t seem like total jerks in WAH, the first few signs show up.

This comic was never good. This comic was never funny, and this comic was never even remotely entertaining. However, the comic enters the next level of suckitude around this strip. That’s the time when Andy goes from “dull and one-dimensional” to a “dull and one-dimensional, annoying, bratty, Mary Sue”. The comic takes another nose-dive in this strip, when characters that were having a tea party and throwing a party with dancing cats start swearing, acting serious, and saying stuff like “go have your period somewhere else.” Remember, these are second-graders we’re talking about.

The story is the only thing in this comic that can’t be easily mistaken for dog’s droppings. That being said, it’s more predictable and boring than a lecture on the history of the semicolon. It’s about a kid, Andy, who decides to sell lemons. Maybe it’s because his last name is Lemons? Or maybe because his and his sister’s hair look like lemons? Or could it be the fact that his and his sister's initials spell "A. Lemon"? Anyway, Andy doesn't have any money (because he’s seven) and so he begs asks for a business partner. But nobody likes him. So what does he do? He becomes as annoying as physically possible.

The only thing positive I can say of the comic is that the art gets better with time. A hell of a lot better. I'm personally really tolerant of art in a webcomic, and I honestly don't care that much as long as it's in the ball park of decency, so I'm not going to give a big, in-depth review. I'm going to show you one of the strips of the comic and show you Mr. Lai's failure at art for yourself. 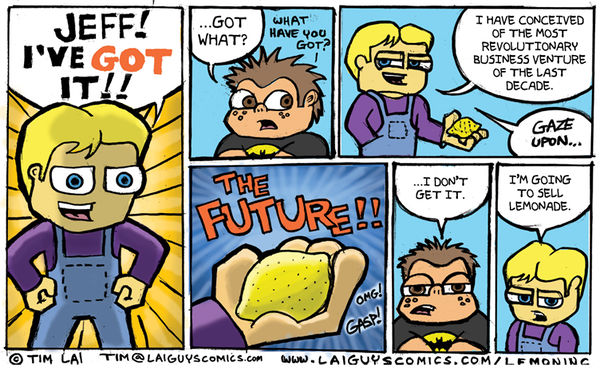 Notice that there's a hell of a lot of stray marks, and the second panel has Jeff asking the same question twice, and he doesn't even shade? And this is just the stuff we could get a drunk, handcuffed monkey to do right. No further discussion necessary. Also, who exactly is gasping?

Ninja add-on: Some of you who are reading this may notice that the example above has a close resemblance to the artistic style of Jhonen Vasquez. Look at the bulging eyes and geometrical shapes of the characters.

Now that we've talked about Lemon Inc.’s appalling art and pathetic plot, let’s move on to the horrendous humor, shall we?

There’s nothing funny about this comic. Not a single joke is funny. 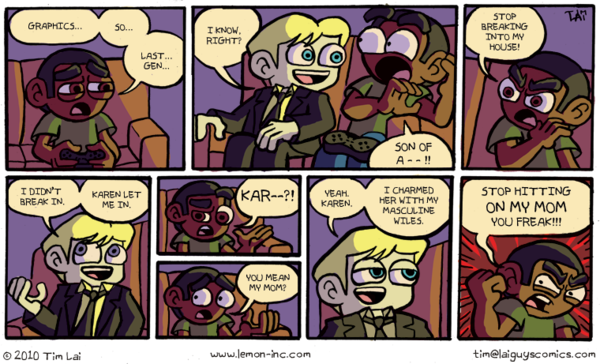 This comic is one of the stupidest there is. Keep in mind Andy’s seven. Yes, he’s seven and not seventeen. A seven-year-old hitting on someone’s mom… and she actually accepts it… take all the time you need to think about that.

Can it get worse from there? Yes, dear reader, it most certainly can get worse. The unquestioned, undisputed, worst quality of the comic is Mr. Lai’s complete and total inability to make a halfway likable or somewhat realistic character.

Andy Lemon, the main character, is a Mary Sue in every sense of the word. He is easily the most annoying brat ever. Yes, I’m very aware he’s a mere seven years of age. However, only the brattiest, snottiest Mary Sue would act in this fashion, and that’s exactly what Andy is. Andy gets everything he wants and everything goes right for the brat. Tommy (remember him? Andy barged into his house because he couldn't accept the fact Tommy hates him) only puts up with him because he wants a Funstation 2 Video Game Console. Andy also pays people to be his friend using Jeff's money, who listens to Andy because he likes Andy’s sister, Alison, who isn't even part of the company. Do I really need to explain more about his character? 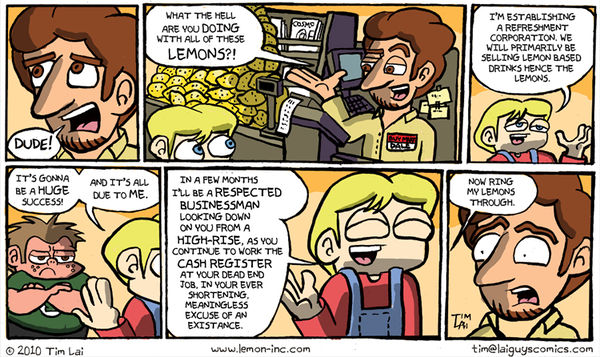 If you were too lazy to read all that, this comic is Andy’s character in a nutshell.

Jeff Katzenburg, as I already mentioned, only puts up with Andy for his sister Alison. Other than that, there are a lot of fat jokes about him. That's literally his entire character. He likes Alison and he's fat.

Alison Lemon, Andy's sister, who wasn’t hired because she is Andy’s sister. Which actually explains absolutely nothing. Another character, Rachel, thinks it’s because Andy wants to avoid claims of nepotism. I’m pretty sure that isn't an issue when you’re seven years old, run a lemonade stand, and literally nobody likes you.

Tommy Frost, who hates Andy because he won't stop bothering him but puts up with him for a game console.

Oh yes, because we all get very emotional when our friends pass gas.

Tim Lai has allegedly been drawing comics since he was eight years old (he must be eleven right now… actually, that would explain a lot). He also claimed in his March 2010 interview with Woody After Hours that his art isn't good enough to be published (so true).

Overall, looking through his notes on all the comics and his twitter, he doesn't seem to be a jerk. Tim Lai just seems to be a nice guy who wants to do art and write for a living even though he’s unquestionably horrible at it.

If there was ever a book called “How Not To Write A Story”, Lemon Inc. would be referenced in it more times than Lady Gaga has worn stupid costumes.