Least I Could Do

For some God-forsaken reason, some of the most popular comics on the web are also some of the most awful. In spite of bad art, bad writing or lackluster humor, these festering barnacles on the humpback whale that is the internet seem to collect fans. Paying fans. Lots of paying fans. So much so, that these authors can live off their shitty comic and, worse yet, crank out even more shitty comics. Truly, this is an ugly system that rewards panderers and punishes artists with any real original vision, which is probably why few creators outside of the webcomics medium actually respect webcomics, and titles like Least I Could Do are part of the problem.

Least I Could Do is a gigantic and hideous monument to writer Ryan Sohmer's fucking ego. It follows the misadventures of Rayne Summers, who is a blatant self-insert of Sohmer himself, as he fucks travels his way through life. It's about sex, family, sex, inept friends, sex, the poor coworkers who have to put up with this schmuck, more sex, and finally, sex. This comic is so obsessed with sex that there's literally a condom on the "I" in the logo. I'm not even fucking kidding. I suppose it's no coincidence that the letter "I" is the one with the condom on it and not the others because if this is spoken in the first person by Ryan Sohmer Rayne Summers, he's basically admitting what a dick he is.

A "downfall" assumes this comic was ever at a high point to begin with. Going back to the very beginning, anyone can see that this thing was a raging pile of semen-scented trash from the get-go. Really. It starts with Rayne Summers celebrating an anniversary with his dick after having fucked fifty women. Need I say more? 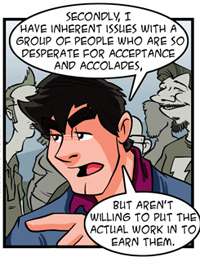 You kids should get someone to draw your comic for you like I did!

Meh, stories show up here and there, but there isn't really a long running plot beyond following the life and times of Rayne Summers. Here, I'll save you time looking: he nails a bunch of girls, his friends totally take his shit, and a series of unfunny jokes ensue.

I'm sure I'm feeding Ryan Sohmer's diseased ego just by writing about him, but from what I can tell, he's a miserable little man with a shiny, bald head and an inferiority complex. Otherwise, he wouldn't feel the need to put out this wish-fulfillment tripe. Another thing I can tell you is that he's very proud of himself for this monstrosity. He does such a good job because his comic updates on time all the time! Although, being proud of updating Least I Could Do on a regular basis is like saying "I shit every single day at the same time on the dot!" Really, this is nothing to be proud of.

His artist, Lar de Souza, either doesn't have a good grip on the English language, or, like many of Rayne's friends in the comic, he has a total lack of self-esteem.

A few things worth adding here include the fact Sohmer tried to delete this review, there is a rumor that he once bragged on his forum about scaring a woman who was annoying him away by threatening to rape her and finally there is a another bit of exclusive info that was sent to us (to an email we lost the password to for about a year):

So someone sent us an email claiming that his black friend sent an entry to a Valentines day contest Sohmer was running and happened to mention his race. Sohmer responded with this:

The comic appears to have been done by at least two three artists. The first one, Trevor Adams, was not very good at portraying the sexual escapades of Rayne. His figures were poorly drawn and his backgrounds practically non-existent. He departed working on the comic in July 2003, citing in a recent interview that the comic "just didn’t fit [him] personally so he moved on." I interpret that as the nicest possible way of saying "I worked on it for money for a while, but after I saw the erosion it did to my soul, I left to save myself and work on less depraved shit." It's speculation but if it's true, good on you, Adams.

Apparently true. Adams himself contacted me and this is what he had to say:

This is Trevor Adams, current artist of Ardra and former artist of Least I Could Do. Just commenting that I read your article and have to say...you're absolutely right as far as why I left. I have five sisters so drawing that comic just didn't mesh well with me because I respect my sisters and they pretty much taught me how to respect women in general. So just putting the truth out there. No I wasn't fired but after a minor fall out, I decided it was best to leave. I did find a comic that I enjoy and it gives a positive message to women out there and I'm having a really good time drawing it and the writer and editor (Jason Dunstan and Fesworks) are fun to work with and really dedicated to the vision of the comic.

If there is any hero to be had of any of this mess, it's Trevor Adams. Get this man a Nobel prize.

The second guy, Chad Porter[1], filled in for Adams. His work can be seen in the book I Have My Moments. Porter also left working on Least I Could Do for what I can only assume are the same reasons as those of Trevor Adams.

Then came Lar de Souza. He started off lackluster as well, but appears to have improved over the years. It's not manga-derived, or lazy pencils like Megatokyo. The artist has developed his craft to a point where he can draw women as something other than mindless sex objects and older people, which is saying a lot for a web artists. The art is actually rather pleasing to the eye these days. Artist gets bonus points for being able to deal with Ryan Sohmer on a regular basis.

This is the critical failure point of any comic, but to say that this comic fails at writing is like saying a tsunami will ruin a nice day at the beach. This comic spits on the craft of writing. It debauches it. It defiles the very art of putting words on a page to express thought. And the reason why this thing is so bad? Because it's devoted to constantly puffing up Ryan Sohmer's ego through his shitty Mary-Sue insert, Rayne Summers.

Well, that and it's a comedy strip that's not really funny. Comedy. That's not funny. Think about the level of failure involved in that. 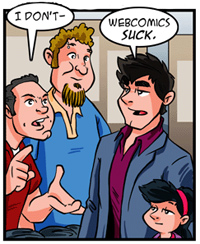 I'm a special case, of course.

From the get-go, the comic incorporates raunchy sex humor which, in the right hands, can be very effective. However, judging by those examples, Sohmer is anything but effective. Every single joke just seems to be about his stupid Mary-Sue character making conquest after conquest (both in and out of the bedroom). Even now, the humor has gotten less raunchy (and Rayne's character a little more toned down), but the punchlines are still just as unfunny. I think Sohmer is starting to realize that constantly rewarding his Mary Sue's stupid antics was costing him punchline opportunities, but it's just not enough. The jokes across the comic's spectrum barely elicit a sneer from me (except ones of disdain).

Coming back to the Mary Sue thing, Rayne's character is the textbook example of a Mary Sue, or Gary Stu if you feel like splitting hairs. He's tall, good-looking, effective at his job, and able to pick up any bitches and hos women he wants. Such things sometimes get him into trouble, but he still ends up on top (no pun intended). He's also a dick to his friends for a good stretch of the strip, constantly making them the butt of his gags, and yet nobody holds him accountable for it. He just says whatever he wants and he does whatever he wants and the sickest thing of all is that this is why the comic is popular. This wish fulfillment bullshit is so the audience can feel like they, too, can be complete fucking assholes and say whatever they want without any repercussions. That's why he's their hero, and our abominable Gary Stu.

The writing overall has evolved, but it's too little too late. This comic did and always will contain the feculent stench of Mary Sue thanks to the constant glorification of Rayne Summers' character from the beginning to this very day. There is no saving this thing. There is no redemption. Ryan Sohmer, with all the improvement in the world, can't do the one thing that needed to happen from the start: GET OVER HIMSELF.

A shitty wish-fulfillment comic that panders to the lowest of the low may earn you money, but it sure as shit doesn't earn you respect. I don't care how awesome you think you are, Sohmer. To me, you are just a sad, bald man with inferiority issues. Now, if you'll excuse me, I'm going to comb my long, luxurious hair.