I'll go ahead and say it: I like Jack. I know it's not exactly high art, or quality writing, but I still read it. I kept seeing David Hopkins' reference to "Dragonfly of Latex BLUE fame", and decided to see why he felt like the pot was calling the kettle black. I should have known better. After reading months, if not years of the archives, I felt compelled to open an account here just to warn YOU, the reader, of the horrors.

The very first strip should have been my first warning. Bad art, a naked blue cat-thing, a disembodied head, and a reference to a "master". This NEVER goes anywhere good.

Some poor bitch named Lara (made from cloth, the reason behind this actually gets explained) is in some bizarre fantasy land, disconnected from her body. An animate blue balloon in the shape of a cat/person named Iris picks up the head and brings it home to her "master", a sadistic rabbit named Alex, who is ALSO made of cloth for some reason and lives in a Dragon called "Mr. Castle". You are reading that correctly. That's the start anyways, but the madness has just begun. While Iris and Alex torture Lara's head, two anthro skunks (joined at the tail) find her body. The actual line is "How fortunate! Let us rape it!" Are they deranged? Look at this picture and tell me. 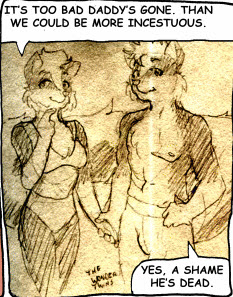 The inn is run by a horse named Silver, who trades food and drink for dignity. After the local law enforcement arrives to shut the place down for reasons unknown, Alex takes Silver as a slave shortly before he is captured and brought to the person in charge of this freak-fest of a town. Silver attempts to stop this, only to end up hanging off a bridge by his penis which he must keep erect or he will fall to his death. Iris has already been kidnapped, so she throws Lara's head out of the wagon carting her off.

And so ends Chapter 2. I won't continue, and I should hope you understand why.

This comic actually LOOKS like it was done in MSPaint. Order of the Stick actually looks good when side by side. Don't think for a second that the poor art will save you from the imagery. Badly drawn penis everywhere. Every single character looks downright creepy close-up.

Lara plays the straight man, given that she is wishing this is all some bad dream, then screaming to be let out of the nightmare by the next page. Iris plays... I'm gonna say the author's avatar (despite the fact that Dragonfly is a guy), and Alex is ALSO the author's avatar. Despite the fact that Iris and Alex are the two sides of the Master/Slave relationship, they both act VERY similar, with only minor details separating the two. Look at this picture and try to imagine how someone could have misspelled a four letter word. 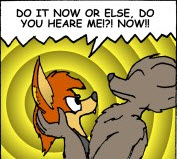 As utterly disturbing as the comic is, it almost pales in comparison to the notes the author has with each strip. Between finding out how many people LIKE this comic, and the fact the author at one point was visiting his FOURTH psychologist (at his mothers insistence), it makes for some depressing reading. I read up until 2003, then I just couldn't take anymore. Stay away, stay FAR away. Do drugs, it will be better for you. This one image really sums the whole thing up: 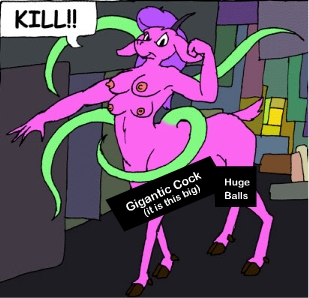 Although the main purpose of this comic is to open the readers eyes to the (sadly) vast world of fetishes, it fails miserably because the author simply pours in every fetish he can think of, but he doesn't understand (or simply believes) that people will automatically accept them by watching it at a poorly-drawn animal freak show. The concept itself is quite delicious as it could explore a limitless fantasy world. However, since every fetish depicted shocks you in various ways, it makes the intent expected by the author impossible to achieve.

Sexuality isn't something you shout in the air. That's why explaining it to the children is difficult even for psychologists. What makes someone think he can expand the borders of everybody's mind by simply throwing in a shocking four-breasted hermaphrodite centaur with tentacles? It doesn't. It just creates more doubts and causes confusion in the minds of those unfamiliar to the subject.