For all of those unfamiliar with the Las Lindas extras, they are a set of Bonus Comics, each telling a "side-story" involving several of the characters from the main comic. Most of them are canon, while others are merely spin-offs with no relevance to the plot.

Over the course of 10 years, Chalo has been doing this OVER and OVER again. See here. Most of the galleries in this list are actual comics which tell us the history of one or more characters in the series. In the beginning, most of them were available for free. Some got rebooted over the years. However, due to lack of popularity, most of them ended up in the waste basket.

Anyways, now all of the comics that are still updating are pay-per-view. People are expected to donate pay money so a new page can be done uploaded (each comic already has between 20-40 pages waiting for fans to pay up).

Okay, we'll go over them one by one:

Knighthood: A long time ago, Chalodillo tried to give his furries a background. This story is the remains of 2 already scrapped stories. This one doesn't suck from the beginning, because it's actually a reboot/continuation of another scrapped story.

Breasts are the Best: It fails the moment the entire female cast is stranded on an inescapable limbo of sexy hijinks, lesbian horniness, and pointless contests to see who gives the slobbering fan boys more boners.

Learning Curves: Right from the start. The problem of inserting several arcs into a single, slowly updating comic like this one, is that as you try to develop one, the other will go on hiatus. The more arcs you have, the harder it is for you to develop them separately while keeping the comic from stagnating.

The Crest Diaries: Its downfall is when the storytelling ends here. From that moment on, the only thing you get to see are pinups of its main character.

Knighthood: A tomboyish (possibly transgender) girl embarks on a quest to discover her hidden powers. What for? Why her? Do I even care? Please deposit a generous donation and wait for the answer... (Good Luck!)

Breasts are the Best: I won't even bother trying to explain this one. THERE IS NO PLOT TO THIS THING!!! IT'S JUST BLATANT BADLY-DRAWN SMUT!!!

Learning Curves: Well, this one actually tried developing another scrapped backstory for one of the most popular characters in the series (don't ask me why he's popular). Miles is a freshman during his college years. Yet, everything seems to be unfair ONLY to him. Boo hoo.

The Crest Diaries: This one, alongside Knighthood, is the final result that was spawned from some other scrapped background stories. Kate, a God-like being who is supposed to share this trait with another chosen eleven is faced with an unknown danger with God-like powers just like hers (what the danger was had actually been explained. However, Chalo deleted any traces of it). When will the plot actually start? Pay, and maybe someday in the future Chalo will remember to tell us what happens next, in between panty-shots and anime bullcrap.

The oldest comic of the bunch, Breasts are the Best, is the only one which you can look at for improvement and progression. In the first pages, that were made about five years ago, the art looks really amateurish. Most of the characters' facial expressions give an uncanny valley effect. It looks really creepy: some characters look like they're lifeless dolls.

However, after 10 years of drawing this stuff OVER and MOTHERFUCKING OVER again, there are two things this guy still does wrong:

As an artist, it sickens me to know I share the same gene pool with this guy. It drives me crazy that, at this point, he is probably a grown man, still draws like a high school kid, and has absolutely zero respect for the trade.

I've seen his progress. It's AWFUL. There are heart monitors connected to corpses that have lifelines less flat than this man's graph of improvement.

But why should he care about any of that? As long as he draws tits, people will give him money. And when the well runs dry? Just make the boobs bigger, the clothes smaller, and the prices higher. No need to learn proper perspective, right? 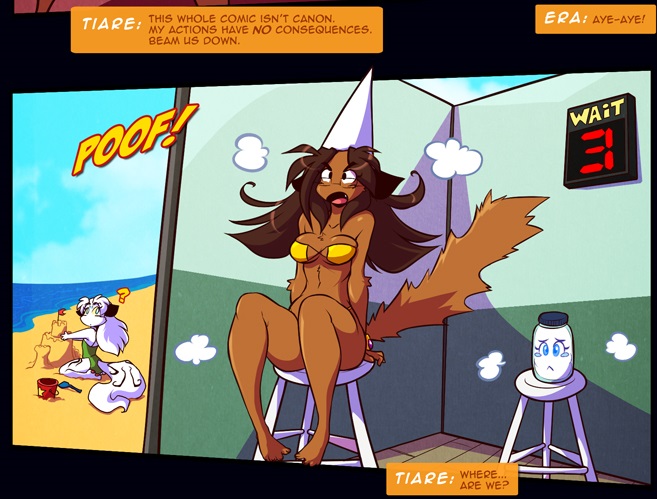 The breasts are the best mainly because everything else is worse.

As you might have noticed already, all these comics have stagnated over the years. None of them will progress unless some moron pours money into its bowels, making the prospect of storytelling completely impossible. From what we know already, most of these stories won't last more than 2 years before they get scrapped unless they show non-stop smut.

It's unknown whether ANY of these comics are meant to, or ever will, collect enough money to be finished. The pay-per-view model isn't working. At least not for the readers. But for Dillo, they are working just fine. As long as someone pays, as long as some people have still not given up and are willing to waste their money on horrible stories that will probably be junked without an ending once people stop paying, why should he care?

Though, the story about Miles in his college years seems interesting and there is hope it might show us character development. However, in a paradoxical turn of events, we notice the character is the same asshole he is in the main comic. And judging from the current course of events, all that is left is for him to drop out and join the main plot we will be given more side stories about characters that we don't really care about.

Did I forget to talk about how one dimensional the characters are? Yep, stupid amazon that is dumb as a rock. Shy, yet hot teacher who is always hitting on her students. Miles is still a jerk seems to have always been a jerk. None of them have more than a single personality trait, which makes them boring and/or frustrating to read about. So, again, they are in no way different than their counterparts in the main comic.

Since it's updated every now and then, chances are that none of this stuff will ever be resolved, neither the quality issues nor the plotlines, leaving us with another bland and pointless set of useless crap. But who needs artistic integrity when you have money?

This is NOT the way to make a comic. Many of these stories were supposed to be canon, which implies we should not need to pay for them if they happen to be SO important. The ones made only for the sake of jerking off are the only ones that I see any reason to ask money for, at which point all false pretenses of being anything other than a smut peddler are dropped. Even though everyone knows that, even before he started making these, the fans were already reading Las Lindas for the sole purpose of wanking it.

I've never heard of this model of business where important stuff for the development of the story has to be paid and given completely outside of the actual thing.

This stuff should be available to the public (even if it's crap). Many of these stories are interesting because, for a second, they give the feeling that there might be more to this. They show us how these one dimensional characters came to be, and have a slim chance of redeeming Las Lindas' most often criticized flaw - the utterly detestable cast.

But none of this happens.

The fans get a bland, horrible main story where all of the characters' history is missing. They get a collection of slow moving, poorly written side stories that end abruptly after people have already spent a small fortune on them and never get to the point because they were too busy focusing on side characters that no one wants to read about because they have no bearing on the main plot. And they get smut. Smut that is pretty much the author saying, "Look, I know what you're here for. You know what you're here for. Let's stop pretending you care about the plot, or that I care about anything besides your money, and instead, just rub one out". Which is a spit in the face of the few fans that actually like this comic for something other than balloon tits and are desperately trying to pretend this fandom has an ounce of dignity left.

All I really have to say is that anyone who is paying money for this is being scammed.

UPDATE: Scammed indeed. There's nothing there at all now.