I believe that in order to warrant a review on the BWW, a comic must be judged by two factors. The first is how bad it is, and the second is how notorious it is. That way, even a comic like Las Lindas, that is by any standard at least drawn with some competence, will receive a review prior to something like The Office Bitch, which is far worse but not notable enough. Comics with aggressively obnoxious authors or a fanbase that does not coincide with the comic's quality to an insulting degree are given priority over ones that are bad but no one could give a shit about.

Yet, once every hundred years, there comes something so incredibly bad that it needs to be pulled out of obscurity only so that it can be laughed at and ridiculed.

The downfall of most comics on this website began the moment their respective authors posted the first page on the Internet. But LOLsketch's failure predates the comic and begins the moment Travis Duane's mother became pregnant and decided to keep it.

The art fails in ways no artist has failed before. From the first glance, it should be evident to anyone with eyes where this comic gets its inspiration. Yes, it's Explosm, the home of Cyanide and Happiness. In a way, it's not even bad art; it's that there is no art. At least bad artists try to make something and fail. This man simply tried to copy something and failed.

Seriously, how do you pick the worst-drawn comic on the Internet as a model and then go down from there? Travis Duane is like a man who chooses the last place contestant in the Special Olympics as his role model but still manages to start the race by tripping over the very first hurdle and breaking his neck.

You know what else? At least the C&H guys have sort of an excuse: it's a comic where shock and aw is the punchline, so blob people make it a bit less gross and give a sort of juxtaposition between the dark tone of the humor and lighthearted character designing. Also they have proven in the past with their flash animations that they have some talent. Heck, one of them made the Joe Zombie series on Newgrounds, which as far as stick figure cartoons go, was not half bad. The same thing can be said about XKCD. Sure it's bad, but it's all just Internet humor, so in a way, stick figures are appropriate. What about lol_comics? Equally vulgar and badly drawn, but unlike this pile of trash, it's poorly drawn on purpose and actually funny. In this aspect LOLsketch is the lowest of the low even among stick figure comics. It starts its way on the bottom tier, and with a combination of zero effort and no talent, finds a way to burrow even deeper. 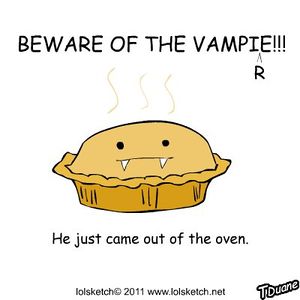 I will give money to anyone who can explain to me why this is supposed to be funny.

There is no bigger waste in this world than a comedy that isn't funny. When you read a story of any genre and if it's good you enjoy it, if it's bad you can at least understand the plot or laugh at its poor quality or become enraged by it. When you read a joke strip if it's funny you laugh, if it isn't you just pointlessly wasted a moment of your life. This is the problem with LOLsketch and indeed with any comic that goes out of its way to insure you of its hilarity right there in the title. Mostly this only serves as testimony to the author not knowing how unfunny he is.

This comic doesn't just fail at humor, no. It acts sort of like a compendium of every way you could possibly ruin a joke. Let me show you:

Thinking vulgarity is the same as humor: the punchline is always AIDS! CANCER! DEATH! ... hahaha hilarious.

Old memes are not the same as jokes.

Unnecessary panel. This one might have actually made me smile a bit if it were left as a single panel joke.

Needlessly drawn out jokes, but this would not have been funny anyway.

Trying to advertise his cheap crap in the comic. Yes, this idiot has the nerve to try and sell you shit.

Punchline is nudity, but there is still no joke.

Making fun of the art being bad, instead of actually fixing it.

Making fun of the art being bad AND explaining the joke! Also breaking the fourth wall.

THEN DOING THE SAME JOKE AGAIN! THE ART IS BAD! HAHAHAHA!

Doing visual gags he does not have the art skills to pull off, although this one could have been drawn by John Kricfalusi himself and it still wouldn't be funny. The only time he puts any effort into his drawings, it's not funny, it's just gross.

This joke has been done a million times, also much better.

Thinking any visual trick constitutes a joke, but no, it has to actually have a punchline, Travis.

Thinking any pun is automatically a joke. Including some puns that aren't even puns.

These are not even jokes, they make NO SENSE!!!

Do you see what I mean now? It's so incredibly unfunny. There are maybe five or six jokes that are honestly hilarious, and even then, it's just by some amazing coincidence. This is the first comic I have ever read where I felt like I wasn't laughing WITH the artist but rather AT him.

In a way, this comic reminded me of an old Eddie Murphy routine, where he told about how he used to look up to Richard Prior and his dirty jokes, so when he did his first stand up act at the age of fifteen, he did it all about shitting because that's the only dirty thing he knew about. This comic is sort of the same; it's like an eight-year-old who heard a naughty word and started repeating it constantly, believing himself to be some sort of comedy genius, until his mother catches him and whoops his ass. In a similar fashion, Travis read Cyanide and Happiness and is now repeating what he saw without any understanding of what (allegedly) makes it funny. Except Travis isn't eight, he's FUCKING NINETEEN!!!

A comic so bad has to raise some questions in your mind like, "What kind of man could have made this?" "Is it even a man?" and "Is it possible to travel back in time to warn myself about reading this comic?" The answer to the third question is of course "No, retard", but the first two have a much more unexpected answer.

It's three people... it takes the combined effort of three people to produce something I would have attributed to half of a man or possibly some kind of man/cow hybrid that has somehow acquired an Internet connection. The individuals in question are Travis Duane, his girlfriend Kym Cork, and Robert Smith with whom Travis shares a blog. The latter two, Travis claims, help him with the comic. Although, if I were his friend, the help I would offer would come in the form of a sledge hammer to his computer monitor.

Another thing that bothers me is that this man not only makes one comic but rather three of them!!! Like in the story The Little Prince, you see that a man can be both lazy and hardworking at the same time. So even though he puts literally no effort into his first comic, he feels the need to have two more that are just as shitty. And his partner Robert Smith is apparently working on a fourth. What is it with these people? Just like in my review of "the other Jack", I find that the most untalented people are not satisfied with making ONE bad comic. No, they have to make FOUR!

Other than that, there isn't much to say about Travis. He does not reveal much about himself, not that anyone cares. All I can say is that I assume he is not a particularly intelligent individual if he is incapable of understanding how bad his comic really is.

I made this review out of pity. I'm still not sure what I was trying to achieve. I saw Travis and his completely dead forum, his "make your own LOLsketch" game that is meant to make it easy for his non-existent fans to make him fan art (no one ever does), I saw his blog that no one comments on, I saw the "project wonderful" ads at the top and edge of his website that no one is willing to pay for so he has to use them to advertise himself, and I just felt sorry for him. I only hope that with this review, the comic might get some attention. Enough for the comic's creator to understand what he's doing and stop. And if not, since it will never be successful, I hope it will be at least a little bit infamous.

In my mind, Travis and his comic are like the smelly kid playing alone in the playground, and if I push him off the swing he should be grateful that at least someone acknowledges his existence.