I found this one waiting for an author so I decided to work on it.

I can just imagine the brainstorming sessions that went on to create this story...

"Inuyasha has a teenage girl who has the spirit of a shrine maiden in her soul. What if I gave her brown hair, made her have the spirit of a fox goddess, and have her be a total, screaming bitch. I am a genius!"

Now imagine that with the rest of Inuyasha. The fox spirits (kitsunes) and Mirru (the heroine) go back and forth between worlds (hers and a vaguely Japanese-looking one), looking for thirteen jewels. Her future love interest is a mixed breed outcast, and there’s a brooding, long-haired bishie who takes an orphaned girl under his wing. So it’s a race against time and sanity (for me) to see which side will win.

The comic was pretty bad from the start, but it got especially annoying when they came across Mirru, the main heroine (who I will explain in further detail in the Writing Review). 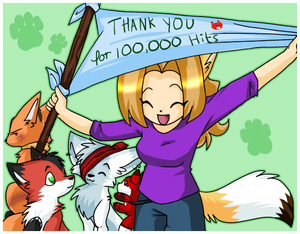 Even on the first page, you can see the trouble as you get to stare at two foxes and a big, fat infodump. Granted, that story might’ve been more interesting, but it’s not the last time you’ll see those infodump boxes or using sound effects over showing an action. And like any badly drawn comic, Emily Maute (the creator) relies on stupid little description arrows to explain things that usually don’t need explanation. There's also the bad sketch-like backgrounds that clash with the Bratz doll style characters, dull power blasts, bad guys who are more cutesy than threatening, and bad fights that in the earlier chapters consisted of a hit or two before the bad guys ran away.

As for the story, I just didn't care, and I even skipped a few weeks just to finish this thing. It’s so dull, unimaginative, and predictable that even its attempts to be dramatic automatically fail. Because Maute wants this thing to be Inuyasha so bad, it has no voice of its own.

Too bad the characters aren't any better. Ryu and Tatamare are pretty much interchangeable except that Ryu is more innocent and inexperienced. There’s also the typical pervy mentor, the mysterious bishie I mentioned before, and our “heroine”, Mirru. With her Kagome hair, Mirru never ceases to make me want to kick her in the face. Granted she’s your typical angry, stubborn, hate-filled uber-bitch that the Japanese seem to be utterly infatuated with. It doesn't make me hate her any less.

And when Maute tries to show what a twagic past the girl has with her foster parents, it plays off more like some rightfully pissed parents who are wondering what their bitch ward was doing, (minus the hitting of course). The comic book, Freex, proved that the angry, temperamental delinquent character can be done right, so none of the fans cam come and whine to me how “I don’t like characters with flaws”. Then again, Gerard Jones treated Val’s temper as a flaw that had consequences and not some cute\funny trait that everyone else just went, “aw you” and put up with. While Mirru has been getting nicer in the latter stories, it’s her earlier attitude that destroyed any empathy and interest I had in the character.

I couldn't find much, but I'm sure Maute has to be at least a teenager with the way she writes, draws, the anime she likes, and the whining portrayal of Mirru's foster parents as monsters for not letting her get away with murder.

Like No Need for Bushido and Zap!, Kitsune Jewel screams, "look at me, I'm a pale impersonation of something else". Kitsune Jewel is trying so hard to be Inuyasha, with nothing that made the original show watchable, that you can predict what will happen next.