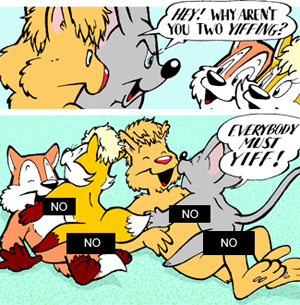 "Downfall" implies that this comic started good, and something changed to make it bad. Nothing has changed with Kit n' Kay Boodle. The very first page of this abomination is nothing but a compilation of sketches of the main characters fu- yiffing. The plots are all about sex, they always have been, and unless we fall into an alternate dimension it's pretty likely they always will be.

The very first storyline of this abomination pretty much sums up the entirety of Kit n' Kay Boodle. Our two fox heroes are taking a pleasant walk in the woods when suddenly, oh no, they fall into a deep hole in the ground!

The characters themselves reside in Yiffburg (translates from furry-language to Cybersexburg) where they are constantly naked and everybody fucks - sorry, yiffs - constantly. Seriously, these people can not even have a fucking conversation without humping at the same time. These characters don't have jobs or interests or personalities because that would distract them from constantly going at it.

Sometimes the main character spot is snatched by the author himself and his wife - or more accurately, anthropomorphic representations of them. These adventures are usually pretty fucking uncomfortable for the reader (if the reader is a NORMAL PERSON) since Mister Katellis seems to have quite a thing for his wife's mother's naked body, and perhaps just as - if not more - unnerving, she's apparently cool with that.

UPDATE:
After several stupid twists and turns in the story, it is revealed that the Gods of Yiff are dying. So, who is granted the important role of being the local God-Mode Mary Sue? You guessed it-our two main foxies. And, under their reign of tyranny, anyone who refuses to be naked and have sex all the time is either forcefully turned into an eternally yiffy beast or murdered. No exaggeration there.

The style of art Katellis uses on this abomination is so out of place it genuinely makes me feel ill. Surely even furries don't want to see this shit. The characters have such cartoony anatomy and silly, exaggerated faces that they look like they should be appearing in children's books or newspaper comics - which makes it all the more disturbing that what they're actually doing is pounding away at each other 24-7. 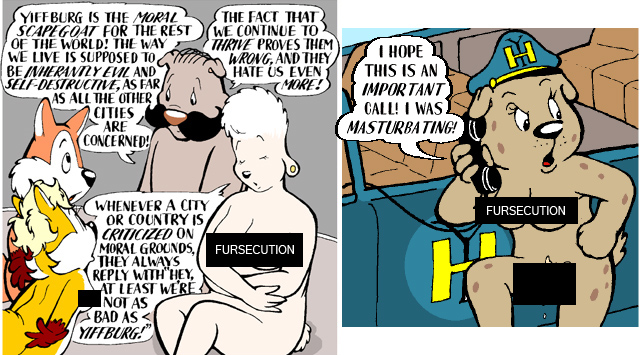 When you know that a webcomic has sex in it, that conjures up an assuption of what the comic will be like. Usually comics with adult content are gritty and have DRUGS and VIOLENCE and OPINIONS because drugs, sex and violence apparently make a good three-man team if you're trying to appeal to a lot of people on the internet.

And while Kit n' Kay's constant munching of magical Boinkberries might be considered very tame substance abuse, this comic is not gritty. For a comic about constant sex between a colourful cast of cartoon creatures, Kit n' Kay Boodle manages to be pretty plain in some ways - all of the couples are happilly married heterosexuals with cozy lives who love each other lots and lots and are mutual in their responsibilities and relationships and always offer each other the last chocolate in the box and all that lovey-dovey drivel. The characters are such dull, pleasant people that all have the attitude of a contented Care Bear, even when there's cum splattered all over each of their orifices (as there usually is). There's no exploration of the usual freaky furry stuff like hermaphrodite taurs in bondage, and spotting a homosexual couple in this comic is so rare that when you finally see them your mind might think you're actually hallucinating. 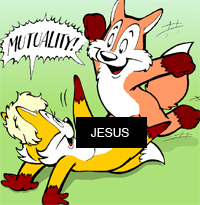 Love and commitment, the Yiffburg way.

Though don't get me wrong, just because the characters talk like sitcom mothers don't think that this stuff is in any way innocent. Let's not forget that in the city of Yiffburg characters can't have a full conversation without sticking their dick inside something. The theatre revolves entirely around watching people have sex on stage. I'm willing to guess every book and TV show in this place is pornography.

You'd think that in a city like Yiffburg rape would be fucking rife. After all, from what I gather the only reason clothes are so rare in that place is because the only law in action seems to be "have sex all the time or you are stuck-up and a bad person". Personally my mind boggles at the thought of what would happen should some poor lady-fox try to refuse the advances of an over-friendly citizen. Would she be seen as the criminal for wanting to stop him embracing the natural beauty of fu- yiffing? Scary. 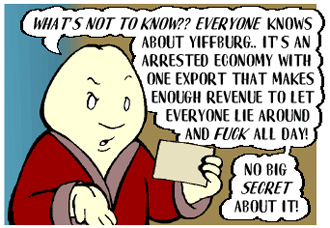 I catch a lot of trains during the week. Usually pretty fucking busy ones. And there's all sorts of people on trains; arguing couples, cackling women, weird old men, annoying kids that kick the back of your chair-

Can you imagine the sheer fucking horror of being on the train with all those god awful, annoying strangers and the whole lot of you being naked. Because if that sounds hot to you, you have a serious goddamn problem.

No sane person would surely want to live in Yiffburg. I am shocked the entire population isn't dead or miserable already, since there's not a single condom in this place and while those Boinkberries might work well as contraceptives, I didn't see a thing in the description about them magically protecting you from STDs. No sane person wants to be on a train, naked, while a middle-aged couple have messy sex on the seat opposite them. This place is the stuff of nightmares.

I am shocked that a webcomic like this is still going, because I genuinely have no idea who this appeals to. The cute art might appeal to younger viewers, but the constant sex means that's a definite no. The constant sex might appeal to the usual lonely furry crowd, but surely Kit and Kay's fat-toddler-esqe anatomy puts them off too. I can only guess that there might be a team of psychologists somewhere marveling at this stuff, unable to comprehend what the hell is going on in Mister Katellis' depraved mind.

It should be noted that Richard Katellis's artwork is identical with that of that of the late Albert Temple of Gene Catlow fame. It turns out there is a reason for it: "Richard Katellis" was simply a pseudonym used by Mr. Temple himself, and furthermore, his supposed female friend "Catswhisker" turned out to be nothing more than a fictional sock puppet. Just as the equally late Jim Hardiman's supposed black female friend "Desiree Lee" also proved to be nonexistent. (I admit I thought that Gray Muzzle of Tina's Story infamy was guilty of this same sin, but he told the world he did have a real wife.)