I’ve been doing some searching for material and of the comics I glanced over, this seemed to be the worst one of the bunch. If nothing else, I would like to take the time to discuss gag-a-day comics. Mainly the fact they’re harder to write than you may think.

This comic was always bad.

There is no overarching plot, this is a gag-a-day strip surrounding the life of Kirsha Brackets, a girl with incredibly shiny braces. If you’ve seen Braceface (an obscure 00s cartoon), this is basically its webcomic version.

There was however a brief attempt to make a storyline with her being in a coma for two months and having to go to summer school, but that didn’t last. Recently, there has been a class election storyline, no doubt inspired by the Presidential election that occurred this year. I guess someone forgot to tell them to make sure they're not late for it.

We all know Flash, right? The animation software that many animation companies used back in the day? Sometimes, it can look amazing. When I think of Flash-animated cartoons, I think of My Little Pony, The Amazing World of Gumball, The Epic Tales of Captain Underpants, and Rise of the Teenage Mutant Ninja Turtles among other shows.

Unfortunately, Kirsha Brackets does not match the quality of those shows. It doesn’t even come close. The biggest problem with the art is that it’s so stiff and lifeless that some of the jokes are lessened because of how poor it looks.

Take this strip for instance: 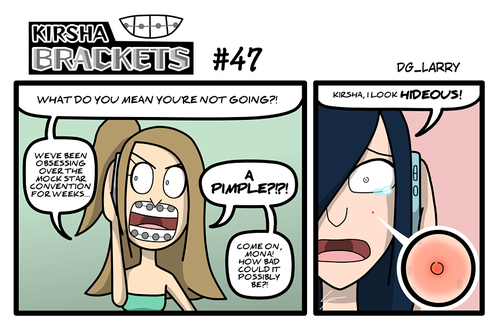 The biggest issues I can find with this strip are the following:

#1. There aren’t enough panels to really get the gist of the punchline. All we see here in Kirsha speaking on her phone, then the panel with Mona (her best friend) with the pimple on the bottom right of it. Nothing has been paced and in turn, the scene feels extremely rushed. If you’re going to tell the punchline, you need to have an adequate amount of panels (four is the most common number of panels I’ve seen from gag-a-day comics). Too many will drag something out long after it’s run out of mileage. Not enough will rush everything. It doesn’t help that…

#2: The facial expressions and perspectives are extremely stiff. All we’re really seeing is Kirsha in the middle of the first panel being angry and then a closeup of Mona being...actually, I’m not really sure what she’s supposed to be. Is she supposed to be devastated? Horrified? A mixture of both? Vague facial expressions can work when the situation calls for it, but this is not one of those times. Here, the expression needs to be pinpoint or it’s just not going to work.

Unfortunately, this is an issue the webcomic seems to have. Here’s another example: 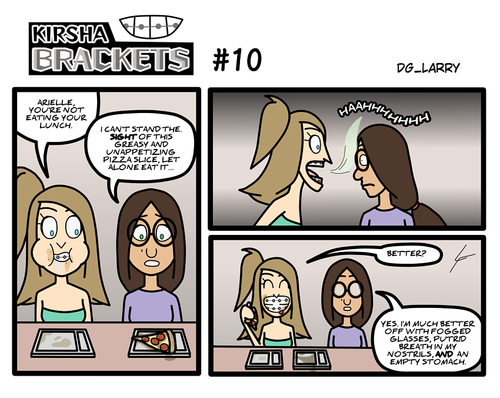 LOL look at the funny girl breathing on the smartie pants. Isn't she such a dumdum?

The joke here is supposed to be that Arielle (the academic alpha-bitch in TV Tropes language) hates staring at and thinking about eating it so Kirsha decides to give her the smell of her own slice. This joke has the potential of working, but we don’t see the fear or disgust in Arielle’s eyes or Kirsha breathes on her. The stiff movements also play a role in the joke falling flat.

If I can say something nice about the webcomic’s art, it’s that the character designs are at least passable. They’re not great but most of them are competently thought out and do a good job representing the characters in question. Even then though, the lifeless nature of the art makes everyone look less like people and more like cheap mannequins. Overall, the art falls short in just about every category.

Above all else, a gag-a-day strip must be funny. If at least 50% of the strips aren’t, then it’s just not going to work. You may think this is an easy bar to climb, but it’s not. Most people who work on them have to come up with a new idea and punchline every day. Some of them aren’t going to hit, but that’s okay as long as they have more successes than failures. Sadly, Kirsha Brackets has more than its fair share of duds. 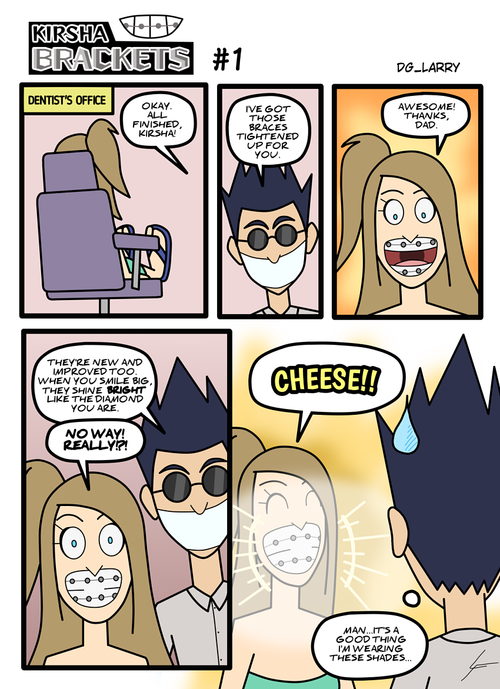 OMG, she smiled when her father said her teeth would shine like a diamond. Don't you just love how literally she takes everything guys?!

The overlying gist is that Kirsha is a dumb teenage girl who tends to take things literally. This is all well and good, but there lies the problem. This is a route that has been done before, dating all the way back to the days of Dumb Dora. Unless you have something new to offer this idea, it’s better you try something new, something that hasn’t been done often (though in the case of the author, that may not be such a good idea. I’ll get to why in a bit).

When the joke isn’t “Kirsha takes things too literally!”, it’s “LOL Kirsha’s a dumb blonde!” or “Here’s how self-absorbed Mona is!” or “ZOMG isn’t this school time thing so relatable?!?!?!”. Most of them aren’t executed well. The joke is either too rushed or just doesn’t work. For example: 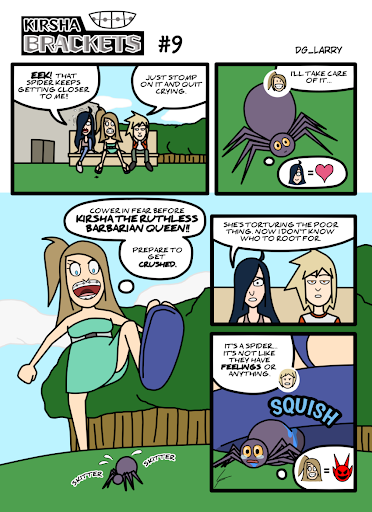 HAHAHAHA, she's a psychopath! Please laugh for me.

The joke is that Kirsha is volunteering to squish a spider Mona is scared of but she winds up making the spider afraid for its life. Not only is that needlessly cruel, it comes as a total mood shift from the original idea.

Here’s what I would’ve done: Mona is terrified of the spider. When Lowe suggests she squash it, Kirsha volunteers to do it. However, she makes such a big show and dance about it that she doesn’t realize that the spider has crawled away. When Lowe tells her, she declares herself the ruthless barbarian queen much to Mona and Lowe’s annoyance. It may not be a major improvement, but it’s better than having Kirsha come off as ax-crazy.

On occasion, you’ll get a decent attempt, like when Kirsha and Lowe are seen smoking weed: 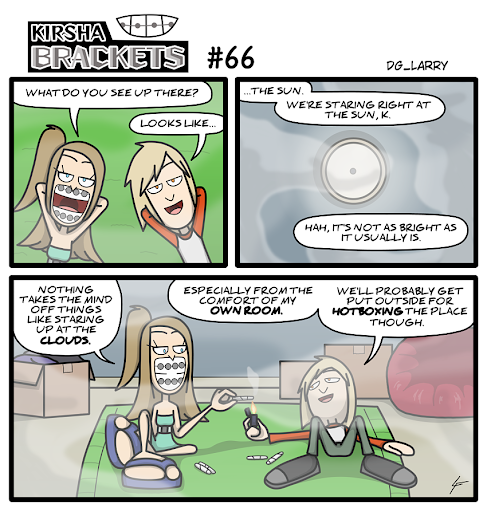 Or when Kirsha’s parents have their…’sexy time’ (Ironically, this one does the whole tone shift thing right.). 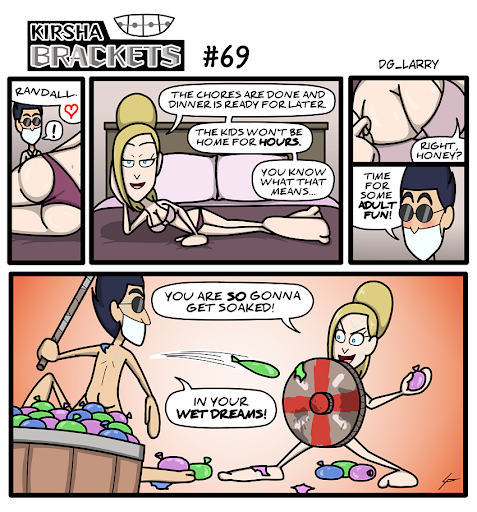 They may not be amazing, but they are at least better attempts at humor, However, two out of seventy-three is not a winning record. If you’re going to do a gag-a-day comic strip, you have to put in some effort and thought in your set-up and Kirsha Brackets doesn’t do that. It just sticks to doing what most strips of its nature do.

I’m not going to go into too much detail here, because at the end of the day, there isn’t much you can say about them. Kirsha is your trademark gag-a-day protagonist who isn’t very smart and has friends that tolerate her despite her personality. She’s seen as an odd girl, but if you ask me, I think she comes off more as unlikable. She’s very annoying, very in your face about it and not an intriguing character to watch.

Lowland is your sane man. There’s not much else to say, he’s like every other sane man in comic history. He gets a job working for the school cafeteria at one point. He also gets stoned once. Riveting stuff. Moving on.

Mona is probably the best of the characters here, but it’s not saying much. Mona is your basic popular girl. Very feminine, very into the trends, very superficial, all that shit. I will admit, she does have moments where she can be fun to watch (lecturing Kirsha on why you shouldn’t wear white after labor day for one), but she also doesn’t really stand out from other popular girl characters.

Arielle is the school genius and kind of a nerd. She’s like Francis from Big Nate but without any of the charm or personality. That’s all you need to know about her. There are other characters like Kirsha’s brother Percival and her parents, and there are other various background characters, but you’re not going to care about them. They’re just more characters to add to the pile of stock characters

Remember when I said that branching out might not be the best idea? Well, this is where things get a bit...disturbing.

DG-Larry is the author of Kirsha Brackets and has been on DeviantArt for four years. On the surface, he seems like an okay guy. No drama as far as I’m aware of...but then you look deeper and you realize this guy has serious issues.

First off, he seems to have a really misogynistic attitude regarding women. When they’re not being annoying or unlikable, they’re being used as sexual objects or are overly sexualized. The most egregious example is Dr. Cruz, a doctor with extremely large breasts and a larger butt. She used to be the subject of her own comic, but that got discontinued. She’s now mainly used to answer questions from fans...and do sexual poses. Most of these poses include the following fetishes:

Now, I’m not about to kink shame him, especially considering how common feet is as a fetish (it’s practically the most mainstream one out there next to bondage) and even if I were to, he's hardly the first person to insert his fetishes into his works. But this does raise a few eyebrows, especially considering he also has several child characters. And this is where I get to the most concerning part of it all.

I don’t know how to explain this but...he may be a pedophile.

May. As in, I’m not sure, I hope to God he’s not but I have some evidence that sadly suggests he may be.

The first bit of evidence comes from a picture of Kirsha being involved in his wedgie fetish (Which I'm not going to link. There will be one for his DA account so you can observe for yourself). The thing is however, she’s sixteen. Now, I’m aware that many countries in the world have sixteen as the legal age of consent but I feel that it’s cutting it way too close. It can leave them susceptible to an older person preying on them and morally, it just feels wrong. It gets worse though, he has another character named Weird Cathy who occasionally roleplays as an eighteen-year-old girl…

Except she’s not eighteen. She’s fifteen.

As I said before, the age for consent for most parts in the world is sixteen. So this guy here is sexualizing a fifteen-year-old girl and justifying by saying “she roleplays as if she’s an eighteen-year-old”.

A gag-a-day strip may seem easy, but there’s a lot that goes into it. You still need to have quality art, an understanding on how to write humor and characters we can relate to and laugh with (or at) when the punchline comes in. Kirsha Brackets doesn’t have any of those elements and in return, we have a webcomic with lackluster art, unlikable characters and no identity to call its own, and when you look into the author’s personal life and his...interests, it makes it all the more upsetting.

My advice? Don’t read this webcomic. And you might want to keep your kids away from the author.