The rise of popularity of shonen (boy) anime and manga in the western world has spawned a glut of fan art, fanboyism, and even webcomics inspired by the genre. However, fan-shipping of shonen anime such as Naruto, Dragonball Z, Bleach, or Yu Yu Hakusho, is not understood by anyone with a half a brain because most of these pieces are horribly unoriginal and repeat the same bullshit over and over. So, it goes without saying that any webcomic that lists itself in the "shonen" genre is going to conform to the same mold and be yet another cookie-cutter rip off.

Key Quest is one such webcomic.

Key Quest is the story of Jayce, a plucky teenager afflicted with multiple personality disorder (why yes, the author does acknowledge the term is now Disassociative Identity Disorder, but he goes with MPD so it fits his stupid plot better). So, having found out about his diagnosis, his grandfather decides to take him to a psychiatric facility to get him further evaluation by experts... HA HA, JUST KIDDING! Gramps tells Jayce that it's time to go on a wacky quest in pursuit of archeological treasure and his long-lost father.

The story from there takes a full-on swan dive into the cesspool of shonen manga cliches and continues to do a backstroke there to this day. Jayce goes on to fight his own personalities in a very DBZ-style martial arts match, thereby unlocking the "power within himself." God, I wish I was kidding.

I could easily say that the downfall of this disasterpiece is the first page. It starts with a teenager. In Japan. WHO IS LATE FOR SCHOOL! Gee, haven't seen that done a million times before. No, it's not quite there. The beginning may be shaky and mired in cliche, but it's not enough to call it a downfall. I say this because I actually held out some hope for this story until the fucking key quest comes into play.

Yes, the absolute point of no return happens when grandpa shows up with information of Jayce's missing father and this ridiculous quest. For keys. Never mind the kid's got a psychiatric issue that probably needs further introspection and management. Fuck that shit. It's time to reach in, use the power of Jayce's multiple personalities and kick some fucking ass!

Stop and think about how ridiculous that sounds for just a second. He has to fist fight with his multiple personalities in his own mind in order to unlock his "true potential" (whatever that means). That's like peeling the skin away from your scrotum and punching yourself in the testes because you think your testicular cancer will make you more powerful.

Robert Lazowski, writer and creator of Key Quest has next to no web presence, so there isn't much to say here. From what little I could find on him, he's a guy in his mid-20s who just LURVES Shonen manga and Xbox shooters. In fact, if Key Quest is any indication, this writer ONLY reads shonen manga. Key Quest is so riddled with every shonen cliche ever hatched that it seems to be all Lazowski knows how to do. 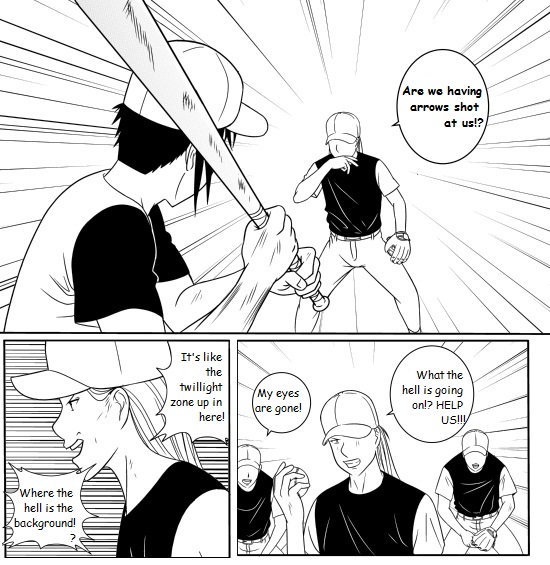 "Maybe if I add enough action lines the comic will become interesting!"

The art is like anything you'd see in standard shonen fare. Pencil thin inks, screen tones, pointy faces, blah, blah, blah. The artist's grasp on anatomy isn't all that great, but it's not the worst thing I've seen out there. He just needs to escape from the kung-fu grip the anime style has over him (and learn how to draw women's asses, fight scenes). Grandpa actually looks like a semi-normal human being and backgrounds, while somewhat simplistic, are also capably done. Otherwise, it's unoriginal, dull, and mediocre.

The writing, unlike the art, is a harder pill to swallow. The dialogue isn't the worst thing I've seen, but it's so bland and boring it doesn't compel the reader to keep going.

The characters are also poorly done. They are all the same set of archetypes you've seen a million times before: the all-knowing grandpa, the worrysome mother, the non-descript friend, and the girlfriend with ponytail. See? The girlfriend has so little identifying characteristics that I actually had to call her "the girlfriend with ponytail." Sadly, ponytailed women occupy 65% of all manga. Even the "personalities" in Jayce's mind are anime stereotypes. You have the outcast fattie, the perv, the business man, the energetic athlete, and the narrow-eyed sadist. Seriously, every shitty anime cliché is here for the party. And how do they all act? By the fucking book. Just like the rest of this stupid comic.

The most obnoxious thing about the writing is the use of a multiple personality disorder as a cheesy and ludicrous plot device. Just like amnesia or mental retardation, MPD is a weapon of choice in the hackneyed writer's armory. It's a cheap way to explain away Jayce's newfound abilities. "He's got multiple people living in his head, but he's harnessed their powers so now he can lift a bed over his head." Never mind that this may be an actual illness with actual implications, just like amnesia or mental retardation. (Fun fact: if you've lost your memory, it's probably due to a head injury. That means you have much bigger problems than remembering who your girlfriend used to be like learning how to speak and dress yourself. But that's neither here nor there.) The biggest irony is that the MPD is actually the most original thing about this story and it still makes it suck.

Key Quest is a bland, boring, derivative piece of shit. I think I can literally get away with calling this thing shit, because that's exactly what it is. Robert Lazowski spent years devouring all the shonen manga he could find, digested it, and the outcome is Key Quest. If that isn't shit, I don't know what is.