Kawaii Otaku Daigaku was in the to-be-reviewed section of the BWW forum. Easy to see why.

The basic plot is simple: Jim is a weeaboo who wants to get into the college that this webcomic is named after. He applies and is accepted, but once actually there, his fantasies of what life would be like at this university (in essence living the life of an anime protagonist) are slowly but surely demolished. But just as Jim finally comes to terms with the reality of his situation, he finds himself a new imaginary love interest which also quickly turns sour. Just as he is about to lose hope, in comes a genuine female Asian classmate... who turns out to not even be Japanese.

The "building up Jim's expectations only to have them brought down" theme repeats itself through the rest of the webcomic's run. A couple more things to mention, though. There's a pair of girls who start following Jim around later in the story. Where did they come from, and why are they doing this? God knows. Later, a Gundam and a woman in a mechanical battle suit arrive in Jim's class. So what's going on now? No one knows. The story stops in mid-stream like I do when I notice a strange spot on my dick while urinating.

So we will never find out why those girls are following Jim or who that new girl in his class is (as if anybody cares), but if I had to wager I would say that he builds up a fantasy in his head about who she is and how talking to her will be like based on some anime trope and then (Gasp!) the exact opposite happens.

My God, it looks like a three-year-old child had been playing with somebody else's tablet. Uneven and scribbly lines, very bad and erratic proportions, very crude depiction of crying and other emotions, no backgrounds, shading in only a few pictures... Here, see for yourself: 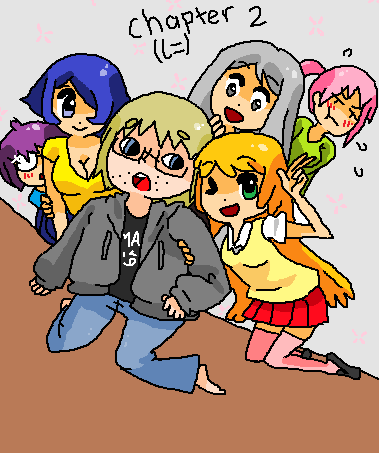 One of the webcomic's better drawings, believe it or not.

I've seen bad art in other webcomics, like Triquetra Cats or 21st Century Fox, but the artwork here is so wretched, it makes those webcomics look like they were illustrated by Rembrandt! Of course, this webcomic is so stupid anyway that it would have been a complete waste of effort to do any decent artwork for it.

One might say that it's a parody webcomic so it doesn't have to be good. My rebuttal to that is: "Shut up" and "Yes it does".

As mentioned above, the same joke is repeated. Jim expects X at the university and instead gets Y. For example, he expects a bunch of cute female teachers and there is only one. He expects his dorm room to be surrounded by girl students and they're guys instead (the author even has to have a pointer on the picture to indicate that detail). The university's medical team evidently consists of a male nurse and his sister (Um, I remember from my college years that university medical departments have bigger staffs than that), but she isn't "kawaii" enough for him.

By now you are undoubtedly wondering why Jim had even expected that this college would conform to his weeaboo fantasies in the first place. If this were the University Of South Podunk, that would be one thing. But note the name of the college. Translating the title from Japanese, "Kawaii" means "cute" or "adorable", "Otaku" means "people with obsessive interests" (usually anime nerds), and "Daigaku" means "university". With a name like that, would anyone expect it not to be a weeaboo fantasy college?

After a year and a half of Jim's expectations continually being raised and brought down, though, the webcomic's tone abruptly changes. As mentioned previously, Jim finally gets two weeaboo "girlfriends" following him around (not necessarily to his pleasure), then weeaboo cliches including a Gundam and a woman in a mechanical armor suit join the story. So now will the university start to meet Jim's weeaboo fantasies? What's the big idea, all the letdown jokes finally got too boring?

Even a nonsensical story might have been okay if it were fun to go through. But the jokes are all quite weak and witless. It's not even dumb fun, it's just dumb.

This first thing someone might say in defense of a webcomic like this is that it's a parody. Fine, I'll grant you that. But I still have mixed feelings about accepting that excuse.

So the art is comically bad to add to the humor and the jokes follow the same pattern because that's the best way to point out the contrast between anime nerds' expectations and reality and that's all fine and good. But even parody has to be good. You can't excuse yourself from any and all standards of quality by saying something is satire.

So this webcomic means to subvert various anime tropes. Fine, it does that. In some ways it does it better than a lot of actual anime that tried to go the same route ("Lucky Star" comes to mind). But it is still far from anything that I would count as "good".

Why? For one thing, the same joke is used over and over again. Funny the first few times, not funny the 50,000th time. Think of America's Funniest Videos and all the scenes of people being hit in the gonads. For another, jokes are hardly amusing if you can see the punchline coming from a mile away. Think of practically every joke in this webcomic.

No one cares about this person and no one ever will.

So what the hell is the point of the whole webcomic? First, we expect (like the protagonist) for the title university to be some weeaboo fantasy college, and then it turns out not to be... and then it starts turning out to be? The story is random, slow-moving, and ridiculous, the jokes are unfunny, the characters are awful. It succeeds in being a parody of harem mangas for a brief moment (which have themselves become so self aware that and successful one is already bordering on parody) before losing any last bit of novelty it had to overly formulaic jokes.

All I can really say is this: Although some say that the essence of comedy is building up expectations in the audience and then subverting them, there is a limit to how literal minded you can be.

UPDATE: Smackjeeves has been shut down and this webcomic wiped along with it.