One day as I was searching for superhero webcomics, I found this on ComicFury as well as the author's Deviantart. Being a fan of aliens, it peeked my interest of a story of an alien supercop. When I saw the cover though, that's when my hopes fell.

Bad art aside, I decided to read into it more, giving it a fair chance. After going through the first four chapters I began to lose interest and started falling asleep.

Originally I wasn't going to make this review, but after seeing all the hugboxing and the links for paperback versions available for purchase, I quickly changed my mind.

Art-wise the webcomic has always been shit, but story-wise, the setup was going good but started going stale when the webcomic became nothing but filler episodes that did little to advance the story.

Clara Friedman is a member of the school paper who is a movie and paranormal freak. She and her friend Tyler Forster find a new girl in their school named Jamie Gibbons who moved into their school. When being bullied by some stereotypical jocks, Jamie beats them up and they become friends.

During a trip to the planetarium, their principal has turned into a bodysnatcher-like alien who attacks the students. Jamie then does a Sailor Moon transformation sequence, and shoots the alien with the help of Clara and Tyler. She tries to run, but the two follow her to her cloaked ship where she goes over exposition of her space cop organization the Galactic Squadron. After the standard "Humans are violent assholes in the eyes of aliens" cliche, the two humans promise not to tell her secret, except for Clara who despite promising not to tell, she tries to take photos of Jamie fighting people throughout the whole comic.

Later, it's revealed that the bodysnatcher from earlier is still alive and goes on another school rampage. They are about to stop him when he steals Jamie's ship, causing it to self-destruct, leaving her stranded on Earth. The rest of the comic at this point is filler episodes where they're facing a conspiracy involving green spores turning people evil, which hardly goes anywhere.

The artwork. Oh my fucking god, the artwork. Where do I begin? To begin with the obvious, the character anatomy is nonexistent.

But the worst part that stands out artwise besides the awful character anatomy is the use of flashbacks which she does a fuck load. For the flashback segments, the author puts the flashback behind the character talking, reuses old panels for said flashbacks WITH the speech bubbles from the old panel still present, only edited to be in grayscale. Not only is this distracting, but it feels tedious as they happen every time there's a major story specific dialogue. In a normal webcomic, there's a bullet to tell you which issue the characters are referring to. There's no need for a copy/pasted flashback as it's unnecessary and lazy. Your readers are not morons (Well some of them might be judging from the comment section of your webcomic, but I digress,) stop treating them like they are. 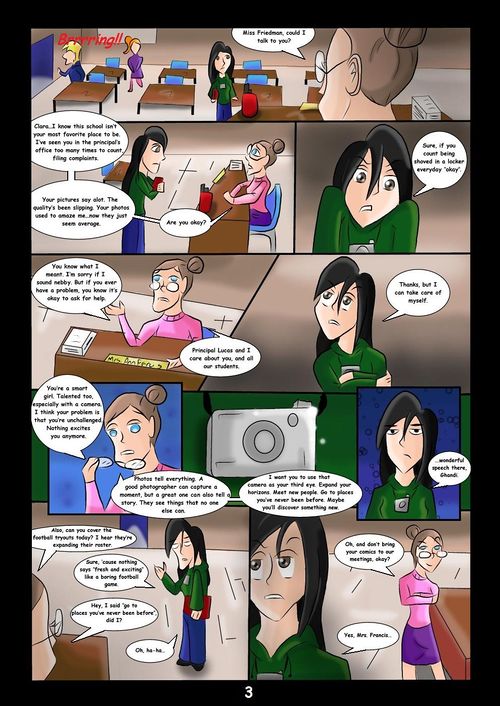 Is the author improving her art like she claims on her Deviantart? Let's take a look shall we? 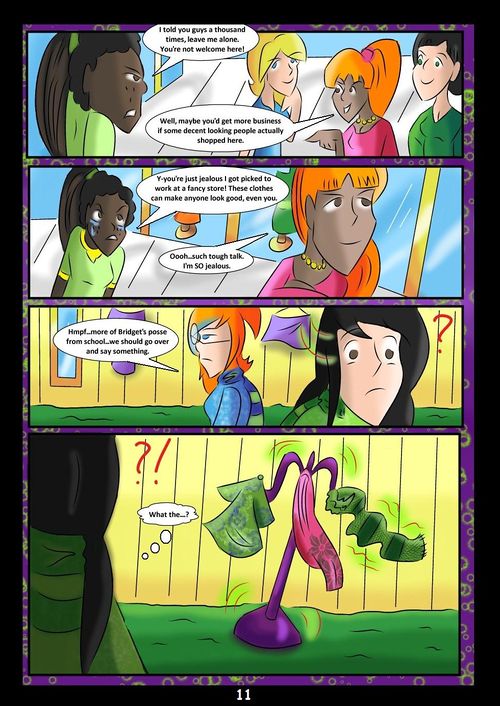 This is the current strip as of writing. (And before you ask: Yes, that is a blatant Powerpuff Girls reference.

So over a course of four years, what has improved? Well, eyes have stopped being derpy a bit, but they're still laughable. Heads have gotten a bit bigger, but still look like shit. And she started shading, which actually makes the art look worse then it did in 2012. So over the course of four years, her artistic skills have somehow gotten worse. If you can't improve on your craft in that time span, then you might as well find someone else to draw it, and there's plenty of people willing to draw it as the fan art looks better then the comic itself.

In the beginning of the comic, it begins with the standard high school superhero cliche, and when we finally get to the action, it feels rushed, probably due to the author wanting to save time not properly sketching action scenes. Beginning in Issue 3 is when the comic starts to become formulaic with an arc about some evil corporation creating spores that turn people evil, leading to the standard "monster of the day" filler episode that plagues manga. In each filler episode Jamie reveals a small bit about her organization and home world, which just leads to further questions since the main story hardly progresses. The filler episodes are also cliche as well, ranging from the camping episode, to the prom episode, to even a trip to the zoo. It would work if the protagonist Jamie would go into each event with curiosity and confusion in a similar style to the Niagara Falls scene in Superman II, but whenever asked about stuff on Earth, she just says "Oh we have that too, but better."

Jamie Jupiter is an idea that is not being given its full potential, but is wasted on an author who does not have the skill to do it. The art is absolutely ghastly to look at, and the story is boring as fuck.

I could forgive Casey if she actually were trying to improve, but it's been four years and it's still as shitty as ever, but of course don't let all the comments saying "You go girl" deter you from actually trying new techniques and improving on your work.

This is how Casey Knoll describes herself on the ComicFury page:

Casey Knoll was born, and has lived in, Pittsburgh her whole life. While the other girls in her class wanted to be princesses and put on make up, she wanted to read comics and watch cartoons all day. Fueled by animated escapades like Batman: The Animated Series and The Powerpuff Girls, she dreamed of one day creating her own comic book with her own characters. Today, that dream's finally been realized. She hopes you enjoy her stories and characters as much as she enjoyed creating them.


"I'm always practicing and striving to improve my art. Always be yourself, and NEVER let anyone tell you your dreams are worthless. As long as you keep working hard and never give up, you can achieve anything." 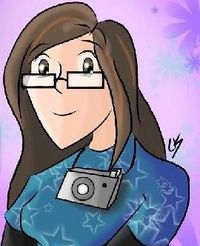 She seems like a nice kid who is a major comic buff and wants to make her own. Problem is, I don't think her artwork has had any actual criticism to it yet as every comment on her Deviantart and ComicFury accounts are all positive comments saying "hooray for you".

Casey, if you're reading this, this is not an attack on you. We truly want your webcomic to get better, and that'll start with bettering yourself. Your skills need a major overhaul before Jamie Jupiter is even close to being ready for paperback sales. If your current technique isn't working, then try a new one, or find someone to help you learn and work on the comic.