So, I had heard about Andrew Hussie’s Homestuck and was interested in reading it. However, I discovered that Homestuck was actually the fourth part of the MS Paint Adventures series of webcomics. In order to have proper context while reading Homestuck, I decided to read the previous three webcomics. The first of these I lead was Jailbreak (due to it being the first comic in the series).

001 looking outside his cell.

Our protagonist (who I will call "001") is trapped in a cell with a key. How did he get here? No idea. How he got here is never explained. Looking out the window, 001 notices there is a huge drop from his cell to the bottom floor. He sees a man, on the bottom floor, looking at a door with a keyhole. Thinking the door is locked, 001 throws his key at the man. The man, oblivious to the key, just walks through the unlocked door.

After this, 001 decides to pee out of window. This hits another prisoner (002), who is trying to use a ladder to get the key back to 001. Note neither the man or ladder were in the previous shot. This causes 002 to topple over and break the ladder. 001 decides to knock on the door of his cell but manages to punch a nearby guard unconscious.

The resulting smell wakes up the guard, who barges into the cell. 001 (naturally) botches his attempt to escape through the now open door resulting in the door being shut and the guard being knocked out again. How the guard was able to open the door without the door being unlocked or a key on his person is never explained. 001 tries to use the guard as a battering ram which kills the guard.

For no reason, 003 proceeds to drill through his floor. This causes the drill to fall into 001's cell. Then, we see the drill falling from a hole in the wall of 001's cell into the drop where 002 is. Did 001 use the drill on the wall? The way it's presented is really unclear.

001 uses the intestine of the dead guard as rope to descend to the bottom floor. 002 uses the intestines to ascend into 001's cell. In the cell, 002 finds a pumpkin that he turns into a mask. Meanwhile, 001 uses the drill to destroy the locked door. In this room, he finds several pumpkins. 001 stumbles upon a door that leads him to another room. This room has a puzzle where you need to carve certain features into a pumpkin then insert the pumpkin into the corresponding slot. 001 does this for one of the slots. This causes the room to flood. In the hope of stopping the flooding, he inserts pumpkins into the remaining slots. However, this causes bars to appear above him and a secret door opening in his old cell.

002 notices the door opening and find a hidden room with two dead people in it. Who are these people? This actually explained... in Problem Sleuth and not this webcomic. 002 sees a hole in the ceiling, which he uses to get onto the roof. On the roof, he spots a skylight and, peering into it, he discovers 001 trapped by the bars and in danger of drowning. 002 descends into the skylight to push a button to save 001. This button removes the bars allowing 002 to get 001 to safety. However, a new set of bars trap 002. 002, panicked, pulls a switch.

The first appearance of the elf

This switch causes a ray gun to appear on the roof. Noticing the ray gun says "Pumpkin Huge-Ifier", 001 shoots 002's mask with it. This causes the mask to grow to giant size and destroy the jail. It begins to roll and takes 001 and 002 with it (with no word on what happened to 003). Eventually, the mask stops rolling. After accidentally killing 002 with a harpoon gun, 001 sees a cursed tree stump and shoots himself with a nearby handgun. This results in a game over for the reader.

Then, the story starts over again thus rendering everything prior to now pointless. Now, 001 reveals to the reader he has magical runes on his stomach. This runes spell out a magical spell. By performing the spell, 001 summons an elf. He manages to convince the elf to give him a pony and get him out of the prison by offering him to get the elves babies to eat. The elf teleports the three of them into a forest and outside of the elf's house. 001 attacks the elf which prompts the elf to hide inside a nearby house.

Realizing he is cold, 001 asks the elf to let him stay in the house. The elf refuses. In retaliation, 001 tries to cast a fireball spell. However since he only knows the elf summoning spell, all he accomplishes is summoning another elf who joins the first in the house. In the hopes of appeasing the elves, 001 kidnaps three kids from a nearby bus. However, the elves only want to eat babies and refuse the offering. As such, 001 tries (and fails) to convince the kids to help him break into the house.

One of the main problem is that most of the webcomic isn't funny. The main reason is that, for most of the webcomic, being gross and absurd are treated as jokes in of themselves. While these things can serve as the basis of a joke, you still need to set up a joke in order for it land properly. Because of this, virtually every joke prior the reset is unfunny. Considering how this webcomic's story is supposed to a vehicle for its jokes, being unfunny is a major problem.

After the reset, the webcomic actually becomes funny. It becomes obvious that the second part of the story is being written by a more experienced Andrew Hussie. He actually sets up jokes and manages to be pretty funny. The pony trying to tell the kids that 001's gun doesn't have any bullet is a particular highlight. However, this comes too little, too late. The webcomic is about 134 pages long but only gets good around page 120.

The other issue I have is that no one in this webcomic has a distinctive personality. Having reread the webcomic several times, I cannot tell you one thing that makes any character different from any other character personality-wise. You might be tempted to claim that 001 is the crazy / stupid one. However, the other characters also act crazy and stupid. 002 wearing an intestine as a scarf comes to mind.

An example of the art in the comic

However, the style isn't handled very well here. The main issue is how all the adult characters (001, 002, 003 and the guard) all look the same. As a result, it can hard to tell who is who. Not helped by the fact that no one is given a name (hence why I refer to the prisoners by numbers). While writing the plot summary, I had reread the section with the intestine climbing so could I figure out who was who. 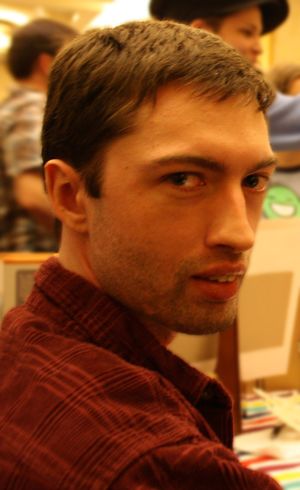 Andrew Hussie graduated from Temple University in Pennsylvania, with a degree in computer science. In 2003, Andrew created a (now-defunct) website called Team Special Olympics. The site hosted various webcomics created by Andrew himself, Cindy Marie and Byron Hussie. In one of the forums for the site, Andrew created a webcomic called "MS Paint Adventure". He asks the readers for commands for the characters to react and would use the first one he could find in the comic. On January 4th, 2007, he created a new sub-forum for the webcomic. The sub-forum was called "MS Paint Adventure". To avoid confusion, the actual webcomic was retitled "Escape from Jail Island". However on February 23rd, he stopped updating the webcomic after having posted the game over.

On June 3rd, 2007, Andrew Hussie launched a new website. This website was called "MS Paint Adventures". On the site, he posted "Escape from Jail Island" now under the name of Jailbreak. On the 12th, Andrew started a new webcomic called Bard Quest, which he would ultimately abandon. On July 5th, he started a third webcomic in the form of Problem Sleuth. It was the first of "MS Paint Adventures" to be finished. On April 13, 2009, Hussie started what would become his most popular work: Homestuck.

However during Homestuck, Andrew decided to revisit Jailbreak. I couldn't find an exact date for when this happened. He decided to reset the story after the game over. Andrew worked on it until the webcomic reached its current ending.

Overall, the webcomic is terrible. Most of the comic is barrage of unfunny jokes with terrible art and characters. While it does improve after the reset, that comes too little, too late. I would only recommend the webcomic if you want to understand the in-jokes in Homestuck and Problem Sleuth.