Jack (the other one)

What is it about the name "Jack" that's so endearing that people have to make webcomics with that name somehow involved? Once this review is complete, clicking the "J" section in the Bad Webcomic Index will come up with three results:

Hey kids! Do you like David Hopkins' "JACK"? If you replied "yes", you're in luck because now you can read this God-awful rip-off by someone who has EVEN LESS TALENT! If you replied no, then you can just exit out of this page and continue vomiting into the nearest waste bucket.

A lot of comics on this site get labeled with "it has always sucked", and this is another one of those comics. But what's amazing about this one is how it has made ZERO progress in OVER FIVE YEARS despite it's incredibly amateuristic starting point. this one truly earns the label "total shit". 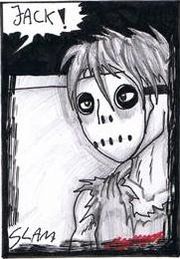 Let me first put it this way: Axe Cop makes more sense than this despite being written by a seven year old. It's so simple yet so paradoxically incoherent that the mind boggles. let me just summarize as much of the story as I can before I get an aneurysm:

The story starts with our hero, Jack, reminiscing about the time he was tied to a pole and about to be executed by rednecks. They change their minds at the last moment and decide to leave him there to starve for the sake of plot convenience. But when they leave, he is inexplicably rescued by a little retarded looking girl. He then goes to hide in a warehouse, then has a dream about a time he was kidnapped. Then the rednecks come back to kill him, so he slices a strip of skin from his chest and gets eaten by an alligator and becomes immortal.

Still with us so far? Barely, you say? Well, that's just chapter one. Let's continue.

Jack meets either his dog or his lover (I honestly can't tell) in a dream (or in hell... again, no idea), then wakes up and is ordered by the alligator who ate him (who is now also undead and talking, somehow) to go kill the redneck who wanted to kill him. So he does, and tells the little girl to clean up the corpse. That girl is the redneck's granddaughter, by the way, but it's okay that Jack just killed him because he was an asshole.

Now let's skip ahead to the masterpiece that is chapter four. Jack is approached at a bar by a prostitute, but he refuses her advances in a slipshod attempt at making him seem like a moral character fueled by some irrational hatred the writer harbors towards hookers. But this whore must take a lot of pride in her work because she vows revenge. Soon after, she and her boyfriend kidnap Jack and rape him in the ass. I have a feeling this was meant to be sad and dramatic, but I honestly could not stop laughing as I read it. To me, this segment wins the illustrious title of: "Funniest rape scene ever". Somehow, we're supposed to feel sympathy for Jack, but it's hard to feel sorry for someone with as much personality as a loaf of bread. Anyway, Jack's is deus-ex-machinally saved by... some guy... who gives him the opportunity to kill the rapist. So he cuts off all his limbs with a chainsaw, punches him and then blows his head up with his foot, then the prostitute goes Super Saiyan, pulls a caveman club literally out of thin air and attacks him. He kills her, calls the cops on himself, goes to jail (no trial mind you), and meets the same guy who saved him earlier (when did he have time to get arrested? literally no time has elapses since they parted ways). Dog boy tells him about how he's in jail for killing a scientist who experimented by killing puppies that he got from making two dogs fuck with a taser. But then the dog asks him... asks him...

Wait wait wait, what?! These dog's are talking?! Also, they are man-sized and walk upright. So what? Are they dogs or are they people? And if they are people, why is he allowed to keep them in a cage and kill their kids?

The entire story is a pathetic attempt at being "HARDCORE !!!" (remember to make little devil fingers when reading this), but there is no for forethought to it. And what's worse is that it isn't told in chronological order. You know how some writers will start a story at the end or the middle? At the hands of a competent writer this creates mystery and suspense. At the hand of our dear Catherin this creates a mind numbing clusterfuck of nonsense.

HAHAHAHA ! *puke* This is a summery of what I felt when I read this comic. Which dose not bode well for its creator's art skill, considering I was laughing when the comic was supposed to be dramatic and puking when I read the comment section.

It's horrendous. The only thing more horrendous is the plausibility that there are actual people out there with real artistic skill and talent who unfortunately have no realistic method for publishing their work while the visual chicken scratch that culminates this comic is here taking up space on the internet.

If you were to shoot a semi-automatic pistol while holding it like that, the slide would break your thumb.

Just refer back to the previous linked examples there in the story review section. If you pay attention to the art, you'll see that Alvheim has absolutely no understanding of perspective, anatomy, shading, colorization, dramatic effects, motion, animal features, or pacing, and probably doesn't know how to feed and clothe herself either. From the way she draws crap I have to conclude she either has something wrong with her eyes, something wrong with her hands or both.

All of these flaws and more make the entire affair utterly droll. The creator desperately tries to squeeze some shock out of her audience and fails miserably. It's only made worse by the fact she draws with a pen and pencil upon further inspection I found out this is made with photoshop, it's just THAT bad. How is anyone supposed to be shocked or saddened by any of this when every character's neck looks like a footlong penis? I can only assume Alvheim's biggest art influence came from legendary dick neck. 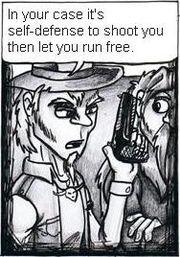 In other words, this guy is telling Jack that he'll be shot and then he'll be set free. Remember how we said this webcomic makes no sense? Do you believe us now?

Jack takes writing to a new low by failing at the task of composing words into sentences. The first few chapters are littered with poor spelling and awful grammatical errors. How can this person have any retentions of writing a serious literary epic when she has yet to master a set of skills held by most tenth graders? I don't even live in the U.S and I still laughed out loud at this crap. Bitch, get a dictionary.

And as far a writing in the literary sense rather then the literal one? She isn't much better at that either. How about we begin this section by talking about the characters? After all, characters are the most prominent tools in story writing. Unfortunately, not a single one of them in Jack has any actual personality or back story. Most of their actions involve, among other tritely bullshit behavior, brutally murdering and raping people to the point that you don't even know who's supposed to be the hero or who's supposed to be the villain anymore. Jack himself spends his off-time from murdering by crying, punching walls, crying, screaming "I hate my life!" and crying some more. What a total badass motherfucker, am I right? He does have some personality, but that's only comparatively speaking, and even then he never goes through any character development. A character like Jack cannot believably be a stoic psycho killer and a sensitive emo cunt at the same time, unless the author knows exactly what he/she is doing. Alvheim clearly does not. The way Jack displays both of his wildly incongruent characteristics - arbitrarily switching from one to the other - is shown with as much craft and skill as Edward Scissorhands would have with pottery-making in a ceramics class during the middle of a category 9 hurricane.

But what really stands out in this comic's list of atrocities is how Jack knocks off everything from JACK and creates a downgraded, and overall shittier version; everything from the name of the comic to its absolutely mediocre attempts at dark and edgy gornography are all carbon-copies, just like how China manufactures cheap knockoffs of other branded products and sells them in dollar stores. But in case it isn't obvious enough, take a gander at the fan-art and the constant allusions to "JACK" in the authors comments. At one point, it became such a problem that the author was forced to make a dubious disclaimer about how she was not copying "JACK."

Since we're already on the subject of no originality, she has two additional comics with equally stolen art styles (where have I seen these bunnies before?), and the true peak of this is when she makes a long-winded rant on her DA account about art theft and sonic recolors. Can you spell "hypocrite"? She probably can't.

I will say this: in it's own way, Jack is kind of original. By ignoring all conventions of storytelling and common sense, it creates an experience unlike any other... unless you've had an epileptic seizure while laying on a bed of broken glass (also, she can't spell glass).

When this review was originally created, it contained a bio section where I made fun of the author acting like a super edgy teenager and her spelling.

Recently I got in-touch with her over her involvement in an incident wherein Dave Hopkins (the creator of Jack) allegedly called one of his fans and masturbated to their story about being abused as a child over the phone and Cathrine's choice to come forward with this information.

After talking about the review and having her come discuss the issue with us on the forum, we realized that she hasn't actually done anything wrong and this part of the review is no longer accurate or fair. Furthermore, she admitted that she realizes this comic has some flaws and said that her response to the review and the one she received on "The Webcomic Overlook" were a result of someone who was already stalking her across the web showing up in the comment section. We request that no one does things like this on our behalf and have decided to retract this review's bio section.

There is one positive thing I can think of that can come out of this webcomic - If you yourself are an aspiring webcomic author and you've read through all of this, you now have a much better chance at creating a better story. Because if someone can take excrement like this and pass it off as a webcomic, then you can bet your ass that there'll be plenty of people out there on the internet who will happily read your comic and tell you how it's perfect even though it isn't. Then again, that rule applies to just about every other webcomic that's been reviewed here.