Words can't describe how bad Jack is. Realistically, there is no way in Hell I'm gonna be able to finish this article without a healthy dose of pictures. Hell, last time I wrote this review, it was nothing but pictures. It was easy like that. You could just see that the webcomic was bad. I didn't need to explain anything. It was just there, right in front of you. Look at the pictures; the webcomic is bad.

Unfortunately, people who looked at this site complained, saying we don't make constructive criticism. One would think that it would only require a quick look at... ya know, the webcomic to see that it is bad, especially in this case. But no. So here are words. There will be criticism. It will be constructive. That will not stop me from being a total asshole, and none of you webcomic creators will pay any attention anyway, but that's not going to stop me from trying my damnedest.

The whole thing could almost be salvageable if not for Jack. Oh, and of course the disgusting mutilations and graphic depictions of gore and organs being ripped out of people's bodies (sorry to put this picture directly on this page, but it is impossible to directly link to any portion of this webcomic): 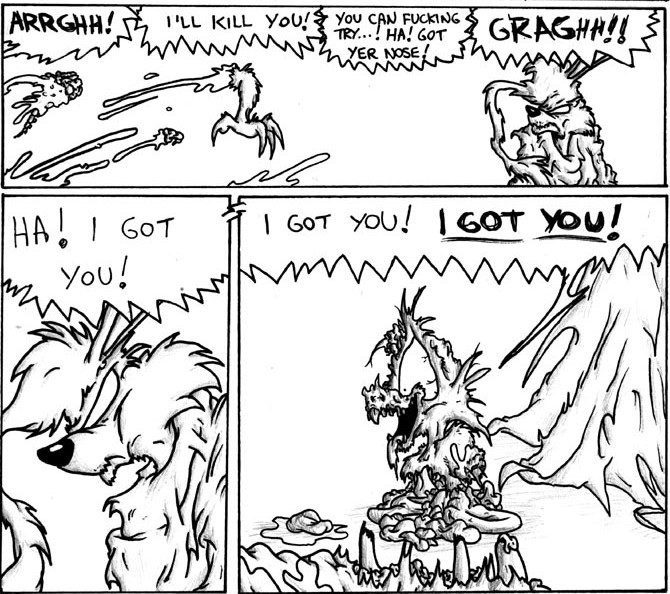 This tag team duo makes the whole entire webcomic unreadable, even the parts that are so bad that they're almost entertaining. In one string of strips, only the blood is colored; apparently Hopkins wanted it to stand out. In another string, in stark contrast, Jack is crying over a woman dying of cancer. In another arc, an aborted fetus is sent to Hell, and Jack plays it totally straight. I'll talk more about these two elements later in the review. 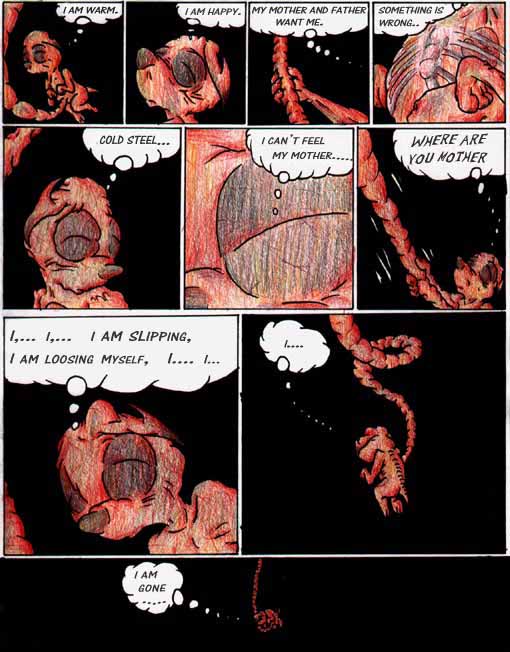 The story and plot of this webcomic are sort of like a cos-play costume. Judging from the patchwork style of Jack's plot, it appears that creator David Hopkins went to the narrative writer's version of Goodwill and just started buying whatever old recycled narratives they happened to have lying around that day, including bits from movies like Donnie Darko and Jack Frost, and then pieced them together with every single horror movie cliché in history. He topped it off with Jack himself, an emotionally depressed Grim Reaper-type character that cries over aborted fetuses coming back to Earth and has dalliances with the angels in Heaven. The whole thing is so incredibly bad, it's almost awesome in its sheer horrific badness, like a version of Plan Nine From Outer Space starring furries, but with even less quality or plot coherency.

I'm not going to sugar coat it; the art in Jack is fucking hideous. Have you even seen this shit? I remember drawing better stuff than this in the back of my notebooks in high school. Sure, the art in Jack is actually an improvement over Hopkins' earlier works, but that's like saying shit is improved by sprinkling glitter on it. Look at this stuff: 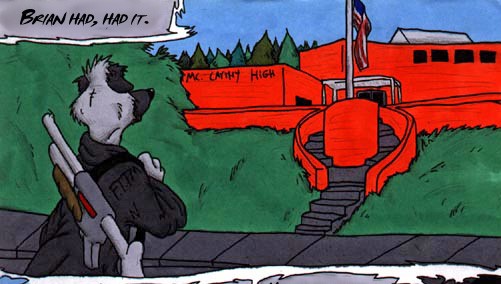 The story of Angry Brian actually predated Jack, though it would be later incorporated into the Jack webcomic itself as one of the early story arcs. The fact that the art for Jack is an improvement should tell you how bad Hopkins really is. Look at this example here: 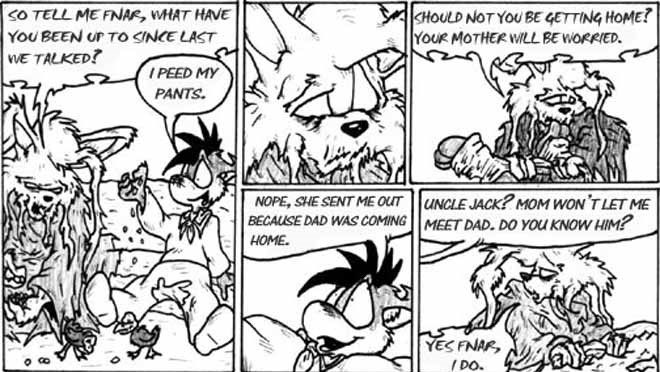 Later on in the webcomic, after the flipper-handed retard "artist" has been working with these characters for a while. It's... well. The linework is clean...

Oh, did I mention that he hired on another person to do the linework for him? Oh yeah. Silly me, of course he didn't improve that much on his own. If he did, it would be almost tolerable. No, you hire Hannah Kelly to do the inks for you. You go ahead. That'll give you plenty of spare time to not study fucking anatomy, not clean up all your nasty, scribbly lines, and keep giving your characters big stupid noses that look like they should make a noise if you squeeze them.

C'mon, look at this picture and tell me that if you didn't know what webcomic this was from, you wouldn't expect the gun to shoot out a flag with the word "BANG" on it, or something else equally comical.

I think what pisses me off the most about the art style in Jack is that Hopkins thinks he can tell a deep, dramatic, violent, trauma-filled horror story with fucking cartoon animals. Look at their eyes! Look at their big, badly-drawn hands and their big squishy noses! They look like they should be swinging goddamn mallets at each other; not contemplating the meaning of life and death. Hopkins' characters don't even look as if he sketches them out before they're inked; what does he do, start with the big buggy eyes and work his way out? It's a miracle this shit isn't drawn on lined paper with math notes in the corner. It may be possible (and very entertaining) to cast cute cartoon characters for a dramatic story if you're going about it in an ironic sense, but Jack seems like something that's trying so hard to be art. It wants so much to be beautifully tragic and beastly and for the people to look upon it and weep with envy, sorrow and understanding all at once.

Spoiler: Not ever going to happen. Ever.

There is one glaring flaw in Jack's writing, and that's the antihero Jack, who is quite possibly the most boring, emotionally maladjusted Grim Reaper character ever envisioned. It's like he's got split personalities, really. At one point in the storyline, the guy'll be crying up a storm at the horrific tragedy of some random person because, apparently, the split-second pain of being blown up by a bomb is so bad that an eternity of bliss in heaven could never offset it in Hopkins' world. In the very next storyline, Jack might wind up being depressed about the plight of some random person in Hell, or he might get pissed off at a school shooter, or he might just reminisce about when he was first born without a penis. The whole thing made me go "what the fuck?" several times while reading the work. 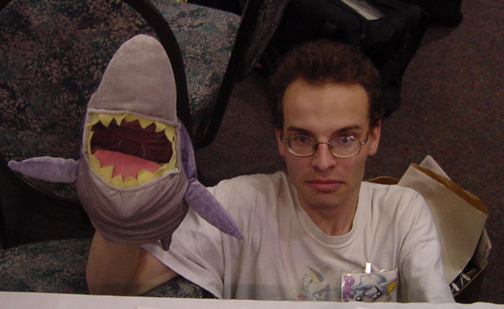 This picture of David Hopkins is from a furry convention. He is known as "Drip Rat," and interestingly has a Something Awful forums account, although it can be difficult to spot his posts.

(Yes, he seriously drew this)

This is Hopkins' earliest work. He started out with a number of odd comics, with names like "Lion King Versus Predator" and "Hobbes Gets Twitterpated." According to his now-defunct "About the Author" page, these early works were inspired by, surprise surprise, Tiny Toons:

I've been drawing all my life, but I only took a serious interest long about the time that Tiny Toon Adventures was in its heyday (I had a thing for little purple French-speaking skunks, what can I say?). 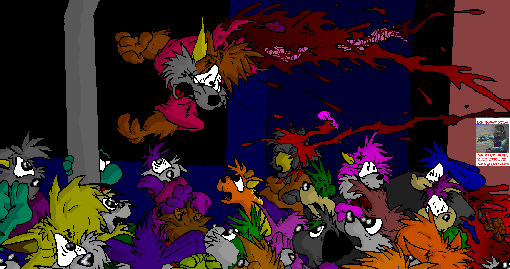 His next work was named Rework the Dead. This is a lesser known webcomic. Like the others, this is far worse than Jack, showing that David Hopkins is actually trying hard to improve, which terrifies the fuck out of me.

In RtD, Hopkins' stuff looks sort of like it was done in MSPaint. You could beat this fact to death, but I'm going to let it slide a little because it was actually colored whereas other artists who end up with monochrome bitmap drawings usually leave them monochrome, which is even worse. Still, pretty bad. From his earliest works to the present, the most obvious improvement was when he gave up on himself and hired somebody to do the inking for him. It's really quite sad. I mean, surely there's a webcomic that could use an ink artist more than Jack. Surely this can't be the best the Internet can offer in terms of writing... right?! Please tell me there's better. Oh yeah, there is. But those people don't need outside sources to do shit for them. Jesus, even Buckley does his own copying and pasting. Put in a bit of fucking effort!

You may ask how I got through this webcomic. The answer, of course, is that I had Eric Johnson's Ah Via Musicom playing in the background while I leisurely strolled through this piece. That CD got me through it, but to this day, when I hear any of the songs on it - including, sadly enough, "Cliffs of Dover" - I am reminded of Jack. Oh well, I suppose. Just another sacrifice I've ended up making to write for this site. In the meantime: webcomic bad. Do not attempt to read. Just... read a book. Walk in the rain. Write a poem. Do something else.