One day, Ivan Henley was born, and...

In Ivan Henley's four webcomics, we see absolutely nothing substantial whatsoever coming in terms of plot. Seriously, there's nothing there.

In Family Crest, there was precisely one tablespoon of plot in a vat of shit. The characters are attacked by little brown things. That's it. There's your fucking plot, lock stock and barrel. Over time, this is added to with the deus ex machina of the little brown things being able to turn into a big brown thing, meaning that the lead character's retarded routine of chasing after these fucking things with a pair of torches no longer works. Seriously, he runs after these "Mud Bounders" with a pair of torches and this scares them and they run off. Then they turn into a giant mud Q-Bert and it shoots a pink thing onto a flaming torch.

That was the entirety of Family Crest. If you were expecting more, it's kind of a kick in the family jewels, frankly.

Filibirdsters was a political webcomic where nothing ever happened, and Galactic Drifter consisted of a page of sex (yes, seriously), so let's move on to the one still going on: Ivan Henley's Hurfa-Lurfa Norval Perterbers, or Eval Hurley's Eyesore-Leper Martyr Pork Renders, or whatever the fuck he calls this piece of shit, and talk about that.

Some shithead "spoiled rich girl" acts out of line with commands, and ends up killing six other officers. Then she gets in trouble for it in a scene vaguely reminiscent of your high school Principal's office and is taken on a holiday vacation with her commanding officer for the weekend.

That's all there is. SPOILER ALERT: I just spoiled the webcomic for anybody stupid enough to want to read this. 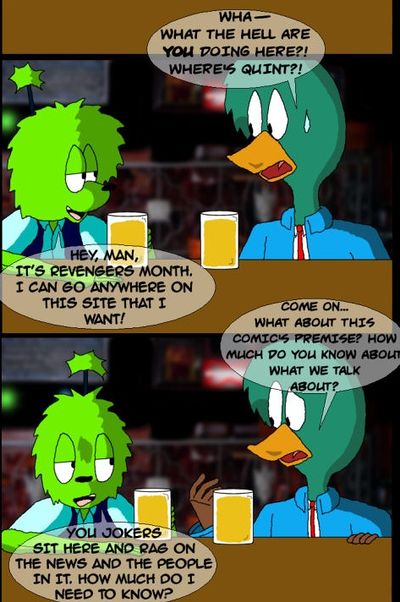 If the characters hadn't said so, we likely wouldn't have even noticed that they were from two different webcomics.

How do you feel about Muppets fucking each other?

If you are horrified, repulsed and suicidal over the idea, you can be assured that you will not enjoy Galactic Drifter. Because that's what happens in the first page. I thought it was bad when Immy-wimmy-wim of Concession drew Swiper raping Dora the Explorer, I think I can state in truth that this is far worse.

In every comic we have Muppets. That's all they are. Don't give me bullshit saying it's a fucking style, it's fucking badly drawn Muppets in every fucking webcomic. Muppets fucking each other. Muppets beating the shit out of each other, Jesus tap-dancing Christ save us all. Muppets crying over the deaths of six other Muppets. Goddammit all, Muppets making shitty and absolutely retarded political tirades.

That's all it fucking is. From page one to the end, it's badly drawn Muppets doing stupid shit no Jim Henson Muppet would ever do.

Ivan can't draw computer screens, eyeglasses, hair, blood, eye patches, or FUCKING ANYTHING OF ANY KIND. It's so horrible you can't even tell him to try to improve, there's nothing to improve here. His drawing ability is literally non-existent. Ivan Henley cannot draw. PERIOD.

On our forums, we had at least one positive criticism of Ivan Henley's drawing ability. It was that he can color between the lines. I will not dispute this. I will not dispute that Ivan Henley is capable of placing his mouse cursor in between a pair of black lines and clicking the button without causing his mouse cursor to move and accidentally color in the lines themselves or areas he did not intend to color.

So, in conclusion: Ivan Henley has drawing ability higher than some species of orangutans.

Who in the fuck is Officer Beamlighter, and why in the fuck does she have a tree growing out of her head?

Why does Ivan "The Terrible" Henley have BUST, WAIST AND HIP MEASUREMENTS in his Hi-ho-Loopy Newbie Pretenders "About" page?

Henley painstakingly discusses tit size and blood type without actually giving any of his characters personalities. Not that it would matter, seeing as how there isn't even so much as a half-baked storyline here, meaning that there would be nothing for decent characters to do, but still. It makes the webcomic even more shitty then if I actually gave a shit about "Officer Beamlighter" and "Officer Valentine" and all of these other nonexistent characters.

I guess he does it as a kind of paean to certain comic archetypes. You see, some comic artists (specifically Japanese manga kas, as if you couldn't have guessed) view things like blood type as interpretations of personality in relationships. But that doesn't explain the "vital measurements", which are rendered completely pointless and silly anyway by the plain fact that Henley couldn't properly draw the measurements correctly and in proportion if he had his hands being guided by Leonardo da Vinci himself. Besides that, he hasn't made it clear how the fuck these blood types correspond to character personalities anyway, because, um, get this, his characters don't actually show any personalities. Imagine that!

The only character I saw with a "personality" of any kind was "Officer Beamlighter", and she was a complete and utter bitch. Henley, if you're going to suck as bad at drawing as you do, could you at least work on your writing? No? Well there you go. Wow, what a shocker.

Ivan Henley is thirty-four years old. "He spent his childhood being fascinated by puppets, ventriloquism and music", which is painfully obvious considering that all of the characters look like puppets and the plot for Galactic Drifter is actually supposed to be about a rock band that travels across Space.

"He graduated high school on the first try, and graduated from college, too. His degree is a Bachelor of Arts in Radio, Television and Film, and it has been put to absolutely no use whatsoever."

"He was married once, but he isn't anymore."

"Yes, we know the 'About The Author' blurbs on his Trials of Balance books make it look like he's still married, but trust us. He's not. He does, however, have a daughter, who is getting taller every day." (He has bred. And he's written some books. Not merely collections of his webcomics, but a set of unrelated fiction stories for sale on Amazon.com. What is telling that there are a number of five-star reviews yet only a couple of one-star reviews. Undoubtedly another case of ballot-box stuffing, as Heather Cushman-Dowdee has done with her books.

"When he's not busy writing and drawing or being a single dad, he has this thing called a 'day job', which is where he earns his actual money. (What, you thought he earned money from his shop? No! Nobody ever buys anything!) He wants to make his cartooning his full-time job one day, but that will likely be a long time coming."

"What, you want to know more? What else can we tell you? He's a pretty boring guy, actually... although he is nuts. After all, he draws comics about anthropomorphic hedgehogs and talking birds, writes books about adventurers who experience things that could never possibly happen in real life, and spends an unhealthy amount of time talking to himself."

And he is described on his Amazon.com page.

Well, at least the man's honest about himself.

Ivan Henley wants to make his cartooning his full-time job one day, but that will never happen. It just can't. Here's the thing: When you put something on the Internet you are subtly suggesting that it is your best work. That if it is satire, it is the best satire you can do. If it is writing, it is the best you can write. If it is art, it is your best work. The Internet is where stars like Maddox and Jerry Holkins and Mike Krahulik are made. Through honing their craft over the years, these men have gotten the attention of major publishers and video game companies.

When people look at your webcomic, they don't just see badly-drawn Muppets, they see an inability to improve. Year after year after year, your drawing style has done jack shit. Your writing ability has not matured. Your webcomics have not become better over the years. If your dream of writing a professional comic is just a pipe dream you harbor in your secret fantasies, live it up. Because unless you begin to show some real improvement - both here and elsewhere - that is all it will ever be.

Here is a sample from a 2019 strip. See the vast improvement from his artwork of a decade before?

UPDATE: In early 2019, Ivan Henley has finally discontinued his last surviving webcomic Hyper-Level Nova Revengers. All that updates on his website now are his tweets, and even most of those are retweets of what other people say.

SECOND UPDATE: I decided to recheck his website. Even his tweets are gone.