This is a page for review responses that I wasn't sure where to put or what to say about. Here you will find things we are not 100% sure were our fault, things that got deleted and we aren't sure what was written in them and otherwise strange or confusing responses.

In irregular section because - The review was vandalized by someone who appears to be the author, but we can't be 100% sure. 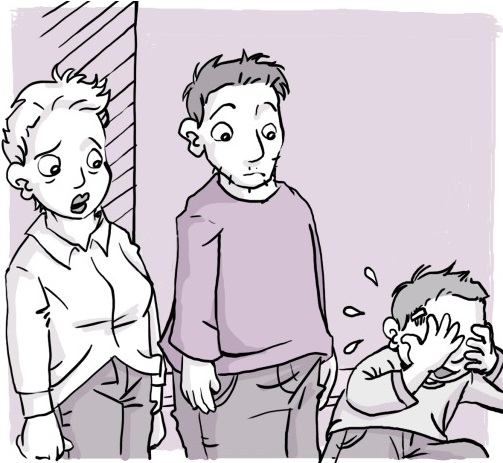 Soon after the review of "Assigned Male" was posted, a new user account was created literally called "Transphobiaisnotokay". The user edited the review from a critical one to a glowingly positive one in a manner that was reminiscent of the time Chris Chan tried to "correct" his Encyclopedia Dramatica article.

Needless to say, the edits were quickly reverted and the user banned. You can view their edits compared to the original here. Since Ms. Labelle already has a history of trying to remove criticism of her comic from the internet, and since the "corrected" review contained details about Labelle's life that the original author didn't find while researching the comic, we strongly suspect she herself may have been the culprit.

The funniest part is that a quote of another transgender woman who said she didn't like the comic or how it represents their community was unceremoniously removed.

In the tradition of all self-important, incompetent writers who think it's impossible they've created an inferior product, Sophie had this to say: 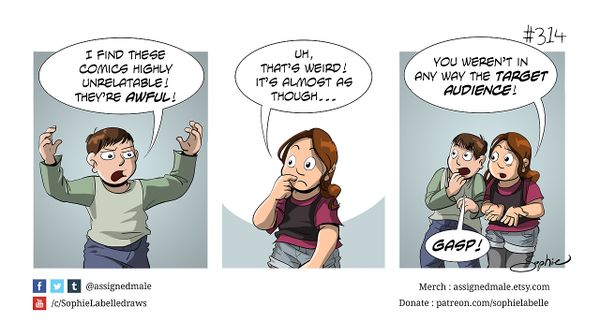 Now, we know that this comic is not necessarily about us, but seeing as how at this point we are almost completely sure she was the one who "edited" her review, and considering how, of all the people who've begun mocking her since we initially published it we are the ones who's description in this comic most fits the bill, we can safely assume that this strip is at least partially about us.

So, that's right: it's not that the characters are lazy, colored lumps or that the dialog is both unbelievable and terrible or that the comic starts with a child being called by the wrong pronoun being depicted as worse than dying of a fever. No. That's not why anyone could dislike the comic. It's because we're not the target audience. Though as a gentle reminder, I should point out the target audience are children and that Sophie is an admitted recruiter.

This mature author is also suspected of defacing the review when it was open to edits. Speaking of which, considering how much more insane Labelle seems to have become since our initial encounter, recently attempting to get two sixteen year old arrested after they made fun of her when she was invited to speak at a high school (and then extorted the school for money), we are now almost completely sure she was the one who tried to vandalize her article.

Now, with all of that aside, I must confess something. It is impressive to see Sophie's finally upgraded to using three skin colors for shading to show depth instead of one color to show nothing. I mean that's taken years but it's finally happened. Though... I can't help but notice Stephie now looks like a midget in her 30's. Unless that's supposed to be a subtle implication that hormone therapy has risks, I think it's safe to say the art hasn't improved so much as moved sideways in its suckage.

In irregular section because - Asked nicely to delete the review

Jonas deleted the comic and emailed us saying:

Hi. If I asked really nicely, would you be willing to take this article down? The comic ended years ago, the site's down, and I'd really rather move on at this point.

Since he wasn't an ass about it and "Dume" isn't offensively bad we deleted the review.

In irregular section because - Continued the comic thanks to a prank

We had a strange little story with the creator of this comic. At the bottom of the review there was a request to try and send an E-mail to the creator pretending to be a fan to ask him to write a chapter where the hero fights Arabs.

After two years of being inactive the comic posted a new chapter that occurs in Turkey...

Is this our doing? No way to know except to make sure by repeating the result.

You know what culture has circumcisions that he has yet to insult? Australian aboriginies. Here is his email again. If you want to see if this was actually our fault, Email Matthew and mention that to him... Good luck!

In irregular section because - Wrote the review about himself 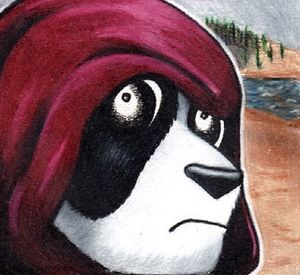 Webcomic artist writes review about himself. Everyone is confused.

We had a whole soap opera with Herovast. Let us just read what he had to say.

This is an interesting one with a bit of back story I need to tell.

Me and my mate Kev made bad reviews for each other's comics ages ago on the Bad Webcomic Wiki because we thought it was funny to insult each other. You can read the one I wrote for him here. He wrote one for me but it got edited by someone who wasn't very funny who tried to do a sort of commentary about getting bored and making a cup of tea because the comic was dull. It wasn't very good so I reverted it. Little did I realise, the BWW is much more of a members club than most wikis, and the person whose edit I reverted was kinda important on the site. I immediately got banned and the review was deleted entirely (they decided the comic was not actually that dreadful on their forum. They didnt think it was very good, but not bad enough to warrant a page.) Well...I lasted longer on that wiki than I did on Conservapedia at least!

Anyway, for some reason it got put back up, along with some commentary of the whole "removing, reverting" thing (which seems weird to me on a wiki, but its their site.)

Anyway, its basically Kev's original bad review but with more added, changed around a bit and more pictures.

I took the original Kev bad review down from the hall of shame because it seemed a bit like cheating (since he did the bad review as a joke I was in on.) But now its been approved and edited by others, I feel okay reposting it here.

So that's pretty much it. They wrote reviews about each other as a prank/ploy for attention, we figured it out, the review was either deleted or lost when the site was hacked. But, since the review was good and the comic is bad, it was restored form a copy they posted on their forum.

Bottom line- Thank you Harkovast for saving us the trouble for writing a review about your little abomination, and thanks again for helping us restore the lost review.

On August 28, 2017, a mentally and emotionally retarded Harkovast fan using the name Pendrake blanked the review. He then left a pathetic, predictable set of remarks in place of the review:

You know, at least a lot of the so called "Bad Webcomics" you guys bitch about actually show imagination and creativity. All you pieces of shit do is tear down the work of others. This website is a far worse piece of shit than any webcomic listed here, bar none. So please do the world a favor and get a fucking job and get out of your mom's basement, and actually do something meaningful with your lives.

This was particularly funny, as Pendrake went on to blank over 250 reviews/articles/user pages, which he later claimed on the Harkovast forums to have read before blanking. This absolutely staggering waste of time was done during the hours people with jobs work in them. He also referred to the message shown above as "constructive criticism" while simultaneously claiming he didn't remove the review.

Unfortunately, it seems the Harkovast forums aren't salty about the review. Pendrake failed to receive more than a brief smattering of the external validation his special snowflake kind need to survive. In fact, one member even called him out on being an asshole. At that point, Pendrake once again changed his story and claimed every review which he TOTALLY READ (please pay no attention to the timestamps on the contribs log, or how obvious is it he hit comics by category before hitting them alphabetically) contained "contained bigotry, racism, sexism, and homophobia". Such as the The Wall of Text which he vandalized into a whiny remark about substance because of its emphasis on the importance of webcomics as a visual medium strong stances on Islam and disabled transwomen suffragettes of transcolor. Seems legit.

In irregular section because - Partially deleted the comic without responding 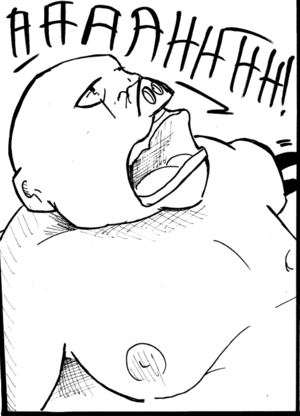 Two days after the review was posted the comic was removed from SmackJeeves. The comic is still up on two other sites, but this is a good start.

We can't be sure it was deleted thanks to us, but the timing seems suspect.

In early January 2021, as it appeared that Trump's presidency was on its last legs, the maker of TRUMPed (Resist) appeared on the forum, asking if he could use the wiki review in his "collected edition".

The reviewer said no, arguging that there was no chance this joker would ever use such quotes in context, or not simply try to spin as "Lol look at what the stupid trump-supporters said about my comic" - which is exactly what he did. Now, while most normal people would have left it at that, Rawdale then decided show the forum his idea for a cover to his collected edition, which is more no-effort photoshopping of press photos of Trump. Oh and to nobody's surprise, Rawdick got upset and started calling everyone on the forum incels when people weren't agreeing with him: 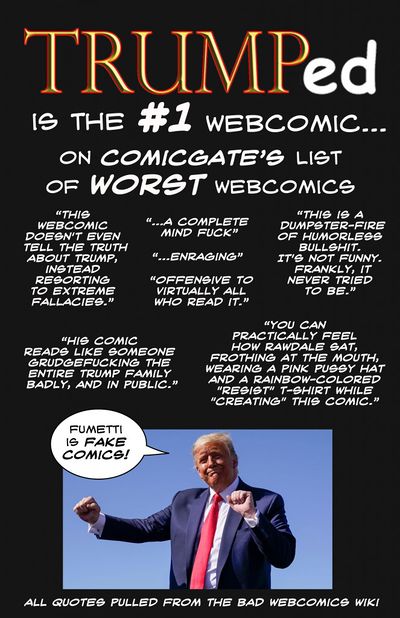 You can practically feel him jerking himself off to this

It's like an starving dog begging for just a single tiny scrap of attention, from people who clearly have no interest in giving any, getting angry that we're not throwing him a bone. Let's hope that with the end of Trump's presidency that this comic dies quietly and with little fanfare... unless of course Trump either manages to stay in office, or runs again come 2024. Oh, and never mind the hypocrisy of stealing other people's proffesional press photos, not citing sources, and then trying to sell them again via your own book featuring them. Can't wait for all the lawyers to eat this fucktard raw. On the 'plus' side, with the trump supporters storming Capitol Hill he'll have plenty of material to work with for the remainder of Trump's presisdency - and when Trump (most likely) isn't prosecuted or otherwise punished for anything once he leaves office, he can spend some time wrapping up his comic with an impotent little hissyfit.

This interaction ended in late January, after Rawdick - in his infite lack of wisdom - picked a fight with a forum moderator, and pissed the mod off enough that he was banned. Then again, considering that Rawdick had the charisma of a sack of rotten onions, then nothing of value was lost. We'll let him return to simping for girls on onlyfans, as that's probably the only kind of contact he gets with women, if his online behavior is any indication.