I Fell Down the Stairs

Obi-Wan Kenobi once advised that there is no more a wretched hive of scum and villainy than Mos Eisley on Tatooine. This goes to show that Jedi do not read web comics. If Obi-Wan had read any, he would have known that the most wretched den of filth on the internet is Drunk Duck. But even in a cesspool, there are always some especially large, stinking and putrid turds that stand out from the general slurry. Such is the case with I Fell Down The Stairs, a gag a day webcomic that aims to set new lows for just how far a webcomic can sink. 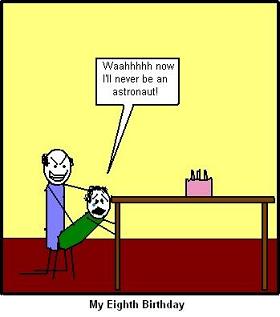 Let's do a little test to see if IFDTS is the right comic for you. Read the following words:

If, on the other hand, you thought "those are just offensive, so what?" then you are going to be shit out of luck reading IFDTS, as I just ruined the punchline to every joke it has to offer!

The author is DESPERATE to shock, hurling whatever unfunny, poorly structured excuse to swear, depict rapes, draw penises, or gore to try and get some attention.

This is not so much a comic as a cry for attention from a sad, sad little man with a lot of anger issues who desperately wants to make the next Electric Retard. Yes, there really are people who aspire to that. Also, don't click that link.

No story here--just a series of random jokes. I say random, but as we've already established, the punchlines are always the same lazy, pointless shock tactic.

Throwing in swear words at the end does not make a comic funny, nor does giving an ironic wink make racism and violence against women okay.

Eagle-eyed readers may have noticed that I already mentioned that the art is done in MS paint, and it looks about as good as you would expect... terrible. It started out with stick men, which in a way was a mercy because at least the grotesque acts depicted were so badly drawn that they lost a lot of their sting. The art has actually improved over time, but in doing so has actually made the comic more unpleasant to read. The characters all look like rigid, poorly-proportioned shop dummies, but this makes them close enough to real people that it makes the action even more disgusting.

If you were thinking of going to read this comic in the hope of seeing some boobies, please don't get your hopes up. The women all look exactly like the men but with round circles glued to their chests, and any depiction of sex is just as ugly as the rest of the art.

This comic updates every day... in theory. In practice, the author takes huge amounts of time off, often months at a time with no updates. Presumably, thinking of swear words to use after three panels of nothing interesting happening must take a lot of time and planning for Kevin. The writing itself is weak like the most stale of Sunday newspaper comics.

Swearing is the crutch that keeps this leprosy-riddled, shambling corpse of a comic going. If Kevin ever had to author a week of strips with no swearing or gross out tactics, he would be producing something akin to Family Circus. 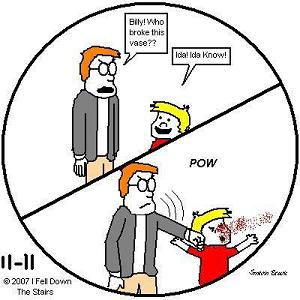 All you really need to know about Kevin is that he can't draw and he thinks that rape is the ultimate punchline, but on his Drunk Duck Profile, Kevin describes himself as follows (along with some additional commentary. The lack of capitalization is as it appears in the profile):


My name's Kevin, and I'm a twenty-four (EDIT: twenty-six now... gettin' ooooold) year old waiter/foreign language major. or art history... i'm still torn between the two. i can't decide which lobe of my brain is dominant!!

Was that a joke? Who knows? With Kevin's humour, unless there is profanity to sign post when he thinks he is being funny or clever, it is impossible to tell.


I absolutely adore drawing comics. I started making them with paint not too long ago (EDIT: it's been two years now) and posting them on a blog just to see how long I could go making one every day and I got hooked. I have a somewhat twisted sense of humor, and as a result I'm often the only one who thinks any of my stuff is funny. But I don't mind. It's fun.

Was that another attempt at a joke?


Seriously I have no idea what to write in this thing. (EDIT: i still don't.)

Was that a comment about his profile or his comic? It is certainly a chillingly accurate portrayal of IFDTS.

My only regret in posting a description of this dreadful comic here is that it will give the author exactly the kind of negative attention he seems to so desperately crave. This comic is ugly, unfunny, and tries way too hard to get laughs with the most low-brow of shock tactics. This is to webcomics what American Pie: Band Camp was for cinema. Horribly bad, but at least deservedly unpopular.

UPDATE: All that is left is a 404 Error message.