OK, here's the deal: a fellow user named FernandoLemon tried to review this webcomic. Unfortunately, he couldn't do much by himself. So, I decided to lend him a hand; and we both worked together to fix his mess to the best of our abilities.

The very belief that they thought this was a good idea.

The story starts with a girl named Sammy, who decides to buy a Chinese iPhone knock-off known as an "iMew" to save money. After using it for a while, however, she realizes that it's slowly turning her into a cat – because we all know the Chinese are magical people capable of doing anything. She manages to hide it from her boyfriend Raf, but her best friend Lydia ends up finding out.

Shit hits the fan after Eddie, Sammy's pet cat, breaks the charger. Sammy and Lydia go to the mall to find a replacement, but since the phone is rare, they fail miserably. They bump into Lori on the way home, and she acts like a bitch for no apprent reason. Her pet ferret (Curran, how subtle) unsuccessfully tries to steal the iMew.

Sammy and Lydia then decide to go to Chinatown, since they're looking for someone who can understand the phone, and are welcomed upon arrival to a festival celebrating the Year of the Cat. They find a store that sells iMews, but the salesman tells them that it needs an updated card, before shooing them away.

One pointless cheesecake scene later, Lori's ferret steals the phone again, causing Sammy to lose the "girl" part of "catgirl". The girls go to Lori's place and get the phone, but Sammy confronts Curran, but this angers Lori, as she now wants to murder the feline. Lydia rushes back to Chinatown to get the new 2.0. chip, with much success – Sammy becomes human again and everything is back to normal. Then it ends, sort of.

Now for a bonus! Did you know that, months after this review was originally finished, a second arc was made? Well, kind of. The characters show up in a crossover arc of Kemono Cafe's own Addictive Science. In it, Sammy turns into a cat again because she's an idiot, then drops the iMew (and Chinese Salesman isn't there to help) because plot, leading to them meeting up with (who I assume are) characters from Addictive Science. After several pages worth of nothing, Lydia is transformed too by another character, then a different character fixes the phone. The two girls are transformed back, roll credits. 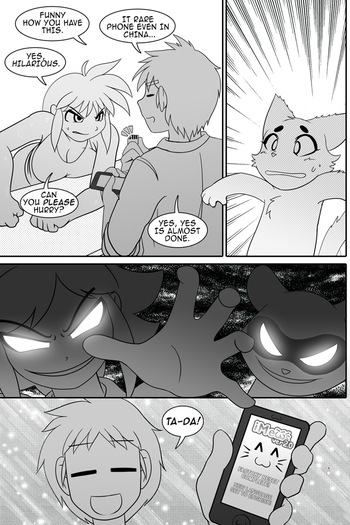 It's different, but also all the same.

The one good thing I can say about this webcomic is that the artstyle's not too bad. Like hundreds, maybe even thousands of other webcomics out there, it uses an anime/manga style. Now, to the artist's credit, the panel layout is very neat. Plus, he's capable of drawing facial expressions, even if most of the time he half-asses it with classic anime clichés like the sweat drop or cross-popping veins instead.

Despite all that, the art has one giant problem, and that is the way the arist handles the backgrounds. They're always either empty, photos or weird gradients. There's even some pages that have all three! 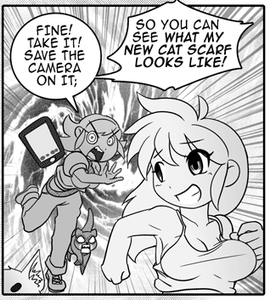 Is her boob trying to escape?

As a final point, I should mention that the second arc mixes in Addictive Science's artstyle, which is sketchier, cruder, and overall uglier (and also forgets to add backgrounds). That's that.

Let's cut the crap. This was a donation-based webcomic. As such, it's pretty darn obvious that the authors didn't care about the end product and just wanted to get their greasy hands on your money.

As mentioned above, this is a comedy. If you thought it might be funny, or at the very least amusing, then boy are you wrong. Every joke is either stupidity (mostly from Sammy), lolrandom, or old internet memes...
No kidding! Sirs, I hate to break it to you, but the way the punchlines are delivered in this webcomic can be summed up in one word...

Another thing, sometimes the authors resort to walls of text to show us what's going on.
A little tip, that only works for important speeches or heated arguments. Using that style of writing elsewhere is not going to get you anywhere.

And then there's parts where it's obvious they didn't have much care with their writing. For example, when Lori's ferret steals the iMew again. He chews on it for a while, but it doesn't get activated despite being unlocked. Because as Smartphone owners, we all know they only get activated by human fingers and plot convenience, never by animals or even by our own asses, right?

Or how about The Year of the Cat festival? I'm sure it's there only for plot convenience (or maybe cheesecake convenience, because what's the use of catgirls if you can't see them in all their feline glory?) because it's actually a Vietnamese celebration.

And remember that whole panic about the limited battery life? Yeah, not only does Sammy keep the phone on at all times, but she uses it constantly, too. You probably own a phone, you don't need us to hold your hand on why this is dumb. And you can ask your nearest 10-year-old why getting an upgraded card won't give you unlimited battery life, but that might imply a 10-year-old is paying more attention to the plot than the writers themselves. 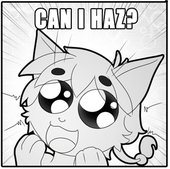 Finally, let's talk about the characters.

...wait, there were characters?

...oh, yeah, I remember now. It's just that they're so one-dimensional and flat that you could sum them up in about two words each. Seriously! Sammy is bland, Lydia is boring, Lori is bipolar, Chinese Salesman is a stereotype and Raf is a dumbass.

The only character that has something resembling a personality is Eddie, who's not even that likable. And he's Sammy's fucking cat!

To not go on for too much longer, I'll be blunt. The artist's other webcomics, Caribbean Blue and Paprika are about furries, ani-maids and the weeaboo culture in general. And Curran is the writer of Las Lindas Bonus Comics. Sweet dreams!

Overall, iMew should have been scrapped while it was still on the drawing board. Yes, the art is somewhat good, but even that can't save this regurgitated piece of cat puke.