IDK Comics is an obscure webcomic with a small cult following. There are only about two or three comments per page, but from what's posted, I can gather that IDK Comics has a following who are convinced that what they are reading is high art, and tend to gang up on people who say otherwise.

This webcomic actually started out as a completely different webcomic called Easier Said with then-artist Cierra Wiley as the creative director. The webcomic Easier Said was about some dude who is trying to find a girl he just met. The story ended abruptly with some other dude yelling at his mom, and then the main character started a staring contest with his mirror. The two stopped making Easier Said because Will had a "genius" idea for a gag a day strip, and they both wanted to make something that was easier to produce, which is ironic given the title of the previous webcomic.

How I discovered this webcomic is actually a charming tale. I took a poll on the chat site Omegle to find what the sites users found to have the worst webcomic of all time. These were the results:

The most-answered response was "idk" obviously meaning that they didn't have an answer for my question. Out of curiosity, I wanted to see if there really was a comic called idk, and unfortunately there is. Whether the posters intended this or not, IDK Comics has been declared Omegle's least favorite webcomic.

It would be easy to say that the webcomic was bad to begin with, but the first strip was not bad. The second page wasn't that bad, as the joke had an arc and a clear punchline. The third page, however, is where it becomes apperant that this webcomic was going to be definitely vapid.

The main issue with the art in IDK is that it's lazy. Somehow, in a webcomic that has no color and no detail, the author is still underachieving. This issue becomes exaggerated after the main artist leaves, as Will has to draw the strips himself. "Draw" is actually a stretch of the term here as he usually just reuses earlier panels. This being the worst example, being a copy paste of the same thirty panels. There is also a constant issue of having an inconsistent font choice.

The main issue with the art is that Will and whoever the artist is are cheating themselves out of their own talent. 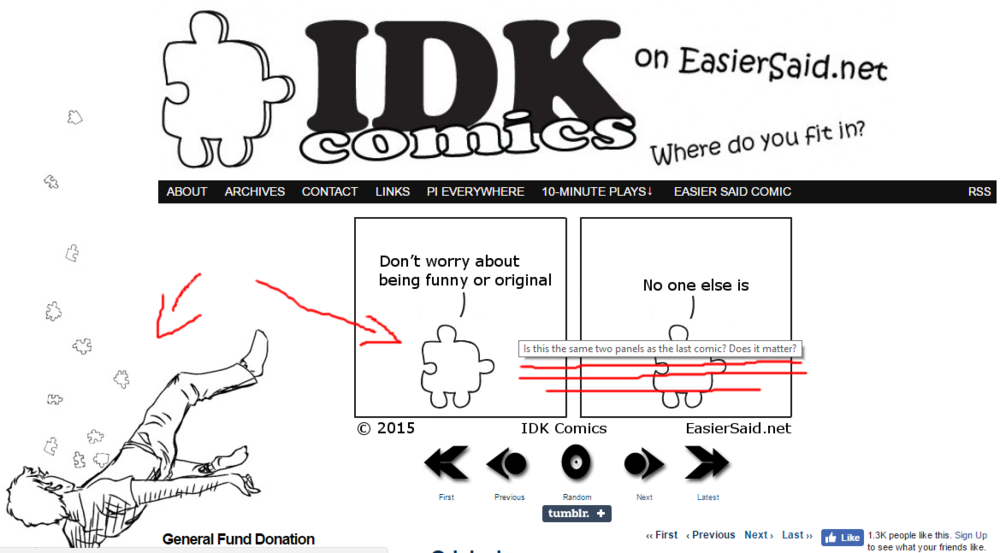 Note the alt text. Also, *Are these.

In case you were wondering, those are the same panels form the last strip. Copypasting aside, what I really wanted to bring to attention is the contrast between the site art and the art of the actual webcomic. The art to the left side of the strip depicts a human that looks like a human. The actual webcomic barely has anything in it. Normally this would be fine, if the writer cannot draw or cannot find anyone who can draw. This is clearly not the case, for as evidenced by the web art, Will knows someone who can draw. Why not hire that person to draw real humans doing real things? I'll discuss why the puzzle pieces are a stupid idea in the writing review.

Though the artists on the about page are credited as various, I have reason to assume that Will does the art himself. It would give reason as to why he has to reuse panels. He is, according to this page, looking for a new artist. My question is, how long has he been looking for an artist? Can he not find anyone for the job? Why not get the artist who drew the person on the side of the screen? The webcomic would benefit from having human characters having human problems, instead of puzzle pieces having the same issue for ten strips in a row. The deal breaker is this page which shows a stark contrast in the pieces at a new angle and and pieces that were pasted.

I should mention that this webcomic does have strips with humans in them. I should also mention that the second link is by far the funniest strip on the site, which isn't saying much, but is still something that can be said. That mostly has to do with how the subject matter is different from the rest of the webcomics, and it has the clearest set up and punchline for the joke. What really sells the punch are the facial expressions of the main character. While still limited, they let you understand what he is thinking and feeling at the time of the conversation. The exchange feels more real than one taking place between two squiggly loops. I think it could do without it being autobiographical, and the backgrounds should have been something other than gradients. This strip does have a surreal aspect to it though, in that it was drawn by the original artist, Cierra Wiley. This is odd, because she made it explicitly clear in her final post that she would not be the artist anymore. This has led me two different conclusions: One being this is an old strip that he found on his hard drive, and the other being that she did a guest strip for him. There is no indication on the page pointing towards how this page happened. The quality and nature of this strip is actually quite jarring. Seeing that the art had definitely improved since the webcomic's inception, I would imagine that this strip had to have been created after she quit. If that is the case, why isn't she drawing a better webcomic for Will? Actually, why isn't she drawing a webcomic at all? She's not wonderful, but she's definitely not terrible either. How the webcomic's art finds an excuse to be horrible is an enigma that escapes me.

I take that back. The biggest enigma is the quality of the writing, as I can't tell if this is the fullest extent of Will's ability. I'm going to use a randomly chosen strip to prove my point.

Thanks for the clarification. For a moment there, I thought he said knife.

This strip above that was chosen for me perfectly encapsulates everything that is terrible with this webcomic. To name a few, the characters are melodramatic, the situation is contrived, the actual event that is happening is realistically a stretch, and could only take place because everyone involved is an idiot. Most importantly, there is no context. I know nothing about the characters in question, and thus I have no frame of reference as how this should impact my understanding of the characters. If you assume that all identical pieces from strip to strip are the same character than this kind of thing happens all the time to him. One could even say the character to the left is even okay with his wife sleeping around, and being around the people she has been sleeping with.

I'm not kidding when I say someone's wife's sleeping around is a common theme. The amount of times it shows up is disturbing.

I think it should be noted that he is at least self aware as to how stupid his webcomic is. Maybe. I prefer to believe that this webcomic is bad on purpose. On the one hand, you have a strip like this, which is retarded on every level, while on the other hand, you have strips like this, which while not extremely clever, still works as a joke. The real turning point is this, which is such a scathing self-parody, there is no way he thinks his own webcomic is any good. The greatest blunder taken by the writing is that none of the jokes work with puzzle pieces. The actions taken by inanimate objects feel contrived, like the situations are stylistically designed to play out that way, and not that they are situations in themselves. This webcomic would have succeeded in its goal perhaps if it possessed a puzzle piece motif amongst a defined cast of characters.

Will Hightower is clinically depressed and a little crazy. Not sure what else to say about him.

The most infuriating thing about this webcomic is that it has the potential to be good, but for whatever reason, just doesn't make the connection. If there were anything an aspiring webcomic author could receive from this, it would be to never cut corners under any circumstances.