I sat down to read this comic on a whim, seeing it linked from another source (how else). After reading it I had so many issues I couldn't set it down. This comic is professional; the people behind it have put a lot of thought and care into it. They obviously have a goal and a message they want to get out there. So what is the problem? The problem is in the resulting structural flaws of valuing the message and the product over the medium. Why a comic? The characters are vague, idiotic, and over-generalized, and the storyline exists simply to fuel the message. Why not a brochure, or some public service announcements? How about a speech at a high school counseling session? This comic has the feel of wanting to relate to teens and say, "Hey, we know it's hard, look, we've been there," but in execution it comes off as patronizing, irrelevant, and insulting. Where is the humanity in these characters? At best they make me roll my eyes in frustration and at worst they make me want to smash something.

The first page. Right off the bat we have our cliche entrance (with the main character making a reference to such, doing nothing to eliminate this fact). But the second page is where the problems really get going.

We're introduced to the comic's main gimmick: the ego elements of the main character's mind represented by different animals. Here she tells us, straight up, what these characters are and what their purpose is. Despite the fact that this is the only real page where she seems to interact with them personally or even acknowledge them at all (they are her own thoughts, after all), we have an exposition page telling us exactly what's going on here. Well, at least there will be no confusion. Or any chance for the story to develop and show us rather than just tell us.

And then we have this gem on the very same page: an extra caption telling you to read the bios for characters we haven't even met yet. That's right, instead of introducing the characters as a part of the narrative like a proper story, they expect you to go check out their bio page and learn who they are with no relevant context. You think they'll be introduced in good time? Keep reading.

A little side note: one thing I can't stand is when comic creators ask readers to write their story or guide how they should write it. Umm, YOU tell ME. They're your characters and your story, so why are you asking me what you should write and who you should feature more of?

The storyline follows Anna, a typical high school girl whose primary concern is fitting in and hooootttttt boys. She goes to school, she gets bullied, embarrassing things happen, she makes friends. Oh, yeah, and her ego is split into different animals who all suffer from massive exposition syndrome talk and argue over each other.

The art is fairly decent. The characters are visually distinct from one another and easily recognizable. The backgrounds serve their purpose and the coloring is vibrant. Overall, the art is clean. It's a little too clean. The lineart is smooth but it serves to make the art look mechanical rather than neat. There is an organic feel that is missing from it, and while it is technically competent, I feel more like I am looking at an Adobe Illustrator diagram than art. The artist has a tendency to rely on the same static shots and camera angles, but there are times when it deviates from this. You get the sense the artist is fairly comfortable with some aspects of art and not so much with others, and as such the art we see tends to focus primarily on the elements the artist is proficient with.

The most annoying visual flaw regarding storytelling is in Anna's design. She represents the every-girl, the social outcast, the weirdo, the loser, and yet she is beautiful. You could exchange her for Bethenny, the main princess bully, and you wouldn't bat an eye. Anna is not even Hollywood homely. She's perfect. So, um, where's the tension here?

Overall, the art is professional and it gets the job done, but it lacks the organic movement that would be especially conducive to this kind of story and ignores the physical awkwardness of real teenagers.

The writing is...patronizing. Not patronizing in a condescending way, patronizing in a "There there, we know what you're all about (but we totally don't)" kind of way. Patronizing in the same way the "cool adult" comes off when trying to relate to youth. This project openly deals with Diana's experiences as a teen, so you might think there's some real background and personality behind this project. But where is it? There's only that vague memory of having once been young translated in the form of what ultimately feels more like a PSA than a story. From the comments spurring readers to share similar events in their lives and discuss how their friends are similar/dissimilar from the characters in the story to full on cautionary tales via blog post, it becomes more and more obvious: this isn't a comic so much as it is a product. And that in itself doesn't have to be bad, after all, reaching out to teens and addressing bullying is hardly a negative aspiration. But there's a way to do that that moves the reader into connecting with the story and relating it to their own life. What this comes off as is merely insulting, especially when you have moments that treat the main character (and the readers) like an idiot. And not in the lovable way they had hoped.

So, the characters. The human characters are mostly tolerable. There's the bully, the friends, the bros. And then there's Hunterrrrrrrrrrrr. OMG what a total dreamboat! OMG OMG OMG! I wish there were more to it than that. I wish the writers felt their audience was more intelligent than that. Sure, teen girls obsess over guys, what else is new. But this soon? With this much zeal? (Umm...never mind.) It gets to be incredibly obnoxious after awhile (made worse by the idiotic ego companions running their mouths constantly about him every time he shows up on screen). But it highlights one of the biggest flaws in the writing: the story is never really given the chance to develop naturally. The characters are all just thrown in there, and we are supposed to automatically connect with them based on only the vaguest of attributes and weakest of ambitions. Keep in mind, up to this point, a week has passed in the story.

A good example of what I mean: you have all three friends Anna has made at this school in her first week sitting down for a shit-talking session and dinner hang out. This may not strike one as strange until you stop and think. She met all of these people in entirely different contexts and yet they just happen to be buddies with each other? It's one of those details writers tend to forget because hey, they know all the characters, so it's just easy and convenient that all the characters would know each other despite there being nothing in the story thus far to suggest they do. (Except for this vague reference, I guess.)

Oh, and forget the fact that this comic has been running for over a year and we have not yet met the entire cast, who are referenced in the bios and the header image anyway. WTF?

Arguably the weakest part of the writing is the overuse of exposition. This page sums up exactly what this comic's central issue is: instead of helping us relate to the character and understand her feelings better, the animals exist merely to explain, explain, explain the plot, her thoughts, and impending events. There is absolutely nothing left to the storytelling itself. All the work of driving the story is taken care of by page after page of wordiness and almost schizophrenic, obsessive thinking. If these animals aren't driving her to insanity they are certainly driving me to it. From their obnoxious one liners and idiotic puns to walls o' text such as above, they manage to both obscure the character more and degrade the quality of the work as a whole. And this is the comic's gimmick.

And speaking of the animals. The animals are where it gets really creative. You have, among the many voices present here, the expository level-headed Scooziecat (referenced above), love-sick idiot Rafella, and these guys: 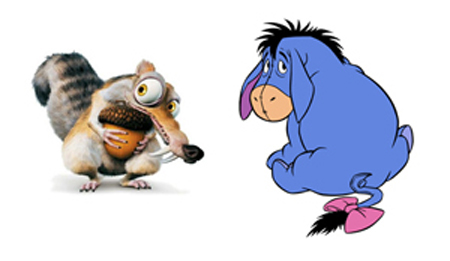 Oh, oops, I mean these guys: 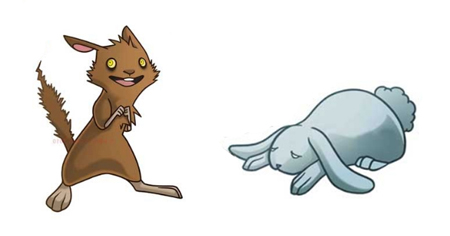 According to the site, the people involved with this project in full are:


Story by Diana Falzone and Geoff Skinner, Art by Emily Chan, Lettering by Thomas Mauer and Edits by Lauren Perry

Again from the site:


Diana Falzone (you might know her from G4′s Attack of the Show, Cosmo Radio, and Maxim magazine) and Geoff Skinner have teamed up with artist Emily Chan, known for her wonderful Stupidfox webcomic, to debut HOT MESS, based on the real-life challenges Diana lived through while growing up, Hot Mess tells the story of Anna, the “new girl”, who is just trying to make it out of high school intact. “Each of these animals constantly give their opinions on what Anna should do in all the social situations she encounters,” says Diana. “From confronting the mean girls to how to handle her first love triangle – and they’ll often butt up against one another and fight over who is right. The animals truly represent all the different, sometimes opposing voices that every teen has when it comes to life decisions.”

There are things like this that do point to the true passion, motivation, and personal experience present in the people behind this work, and I want to acknowledge that. There are clearly real people and real feelings and events going into this. I commend the intent and the desire to reach out to struggling teens (although how many of us can say we were as gorgeous as Anna, the character who is supposed to represent the socially alienated reader?) I think it ultimately fails not because the writers don't care but because they don't maximize the medium's potential or even regard it much of the time. Why make it a comic when you disregard the visual elements, dialogged, and characterization in favor of unnecessary exposition and a thinly-veiled agenda (however admirable)? It feels arbitrary.

My ultimate goal, as always, is to see this work become what it truly wants to be. There is heart behind it, so it would be nice to see some solid execution as well.

Oh, and for the love of God, GIVE THE PINUPS THEIR OWN DAMN SECTION OF THE SITE. THEY DO NOT BELONG IN THE MAIN ARCHIVE. And having more than a couple dozen pages before running a bunch of contests and guest art spots would be a good idea, too.