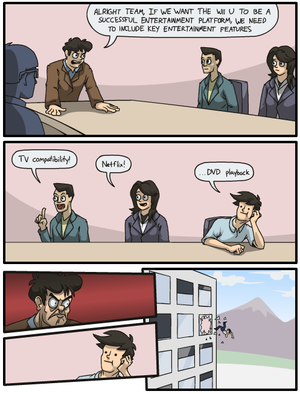 The comic that fathered this retarded meme

When I started pursuing a (non-paying) career as a webcomic critic, I thought I had nothing to lose. I though "Hey! You know what? It's actually kinda fun to analyze comics, point out their mistakes and learn from their strengths. This is an awesome hobby!" Ah, the innocence of youth… Then, in an otherwise ordinary day someone said "Hey, why don't you take a look at Hejibits?" And I did.

And Hell followed with it.

This is not even my first review of Hejibits. This comic is so bad and horrid I wonder if the author is doing this on purpose, but he seems to be clueless about his complete lack of style, taste and wit. I digress, though, what I really wanted to say is: this comic is so bad and horrid I felt actually robbed of my life for reading it. I think one single review is not enough. I need to tell the world! I need to make my point: Hejibits. Must. DIE!

…or not so much. But really, I gotta vent this out.

I hate reviews that say this, but… this thing is bad from the start. Don't believe me? Check this out. Now tell me there was even an inkling of goodness in it!

The Many Flavors of Hejibits

I'll give Kleckner the credit, he never tried to write an epic plot. Doing so, I believe, would generate a vortex of badness so great it'd suck everything good in the world into it, turning up into down, inside into outside and Penny Arcade into Cyanide and Happiness. But I'm digressing once again. Hejibits' stupid humor comes in three flavors, and I'll tackle each of them separately because if he bothered to separate them as categories, so why not?

"Roommate Comics" are where Hejibits started. These are comics about John's annoying roommate "Greg". These comics follow one simple template: John is minding his business, Greg comes, makes a stupid assertion or a very bad joke, or is just generally annoying, then John starts bleeding from his eyes, bashing his head on the desk, pulling his hairs out of his head… any overblown reaction is good enough. Another thing there's in common among these comics? They're all ANNOYING. I'll expand on this in the Writing section, soon.

"Gaming Comics" are comics about games. Well, duh. In these comic, Klecker either comments "stoopid" design decisions in games he apparently doesn't like, or tells stories of things that happened with him. And sometimes he does something tangentially related, but usually just as boring or dead wrong as any of the other alternatives. Again, see the Writing section for more details.

"Miscellaneous Comics" are the comics he apparently didn't even bother categorizing. Sure, that's a great start there, Kleckner, not even caring about your comics enough… Anyway, these comics are notably about… anything that's not gaming or his stupid-ass roommate. And, surprisingly, that doesn't make the comics any better.

I think the only improvement this comic ever made was switching from MS Paint to Flash.

The comics has ONE big flaw: it's ugly. Every expression and aspect of people is exaggerated, distorted or overblown in every single panel, so one fails to see any sort of emphasis. Huge overblown expressions can be done well, if they're done to put more energy into a single scene. Or to up the ante of the oddity in the name of humor. But when your characters are making inhuman faces every single moment, it loses any impact, and everything is equally bland and ugly.

A scene from a circa 2014 comic. Great improvement, huh?

I don't want to waste any more time arguing about how this comic is ugly, so I'll tell you what it looks like. It looks as if 4chan memes made a comic, and decided that their already distorted and forced faces weren't bad enough, so they made things even MORE ugly and overblown. That's what it looks like.

Three flavors of comics, and three distinct flaws that are slightly interchanged. Allow me to demonstrate…

First, Roommate Comics, as I said, not only follow a rigid template, but are incredibly annoying. That's because of an obvious fact: writing about annoying people is annoying! But that's not just it. In these accounts about his annoying roommate, John should come up as the guy we're supposed to side with. He's the person we should care about. But that fails not only because he is either completely blank faced or with an ugly RAGEFACE, but also because he's pathetic! His reaction to a misunderstanding (a very bad but an honest one) is ripping his cheeks off. One factual inaccuracy, and this is his reaction. DUDE! Act like a normal person so I can care about anything you do instead of thinking it serves you well for being such a raging wuss! So, between an annoying character and another who overreacts to everything, I think I choose… none.

His Gaming Comics are worse. When he's not telling us about what happened when he was playing the other day, he's poking fun at stupid design decisions with one single tired template. Or just being stupid. Either way, his stories are not interesting and his pokes at the game industry usually miss the point completely. Like how he thinks the "bubble" feature of New Super Mario Brothers Wii turns people into assholes. What.

In general, Hejibits has some funny moments actually. Like the first four panels of these comic (random silly expressions non-withstanding) or this depiction of the move Mean Look. But these little funny moments are not interleaved into tamer moments that accentuate their funniness. Nope. They're among a great festival of shitty random bullcrap. So it's practically impossible to appreciate them. In short: the badness of this comic is so bad it contaminates any good it has! It's like… trying to clean a huge puddle of oil by pouring water in it. In other words, hopeless.

I do not know John Kleckner, and I do not think I wish to. All I know is that he claims his roommate "has an astonishingly terrible sense of humor/social interaction". Dude, have you ever read your comics?

In an unrelated note, ever since I read this goddamn pile of dung I've been wondering what Hejibits means. According to Mr. Kleckner, it's

a rather brilliant combination of two of my internet handles, BaconXBits and Hejjihoggu.

…Okay, let's start with this: a portmanteau is not anything "rather brilliant". Secondly, I think you missed a J there. Third, why do I even bother? Let's finish this god forsaken review!

I actually read through the archives of this shitfest, folks. And maybe nothing illustrates my point better than pointing out what I believe is Hejibits' best comic up to now. Do you notice anything about it? Yep, it's still bad as fuck. It manages to be borderline funny, but otherwise, it comes from the same steaming pile of shit that this whole comic does.

I rest my case.