I strongly hope you can believe that this guy voluntarily linked to this abomination in his signature on the Twotard forums.

Day one.  The artwork is ungodly, complete with badly drawn and badly traced cat girls, sleeping sea urchins and a disembodied head.

I… I don’t know what to say.  It’s like someone made the most contrived bullshit anime-derived story they could think of.  The story begins with the floating head of Shinta in school being taught by a busty cat lady.  Then she hits him for sleeping in her class.  Then he goes out to buy some pocky (spelled poky, but the writer can’t seem to spell worth a damn) when he happens upon an unnamed girl in danger.  The girl is pursued by… some guy... and Shinta saves the girl by blocking a knife with his chest, and then rising from his injuries and turning into a treasure troll.

Shinta then wakes up, damsel in distress nowhere to be found.  In her place is some guy who talks in sideways manga talk and seeks to awaken the lead’s memories because of course, Shinta is an amnesiac--a staple in 85% of shonen anime.

Overall, the story is contrived, taking as many if not more plot and dialogue cues from anime and manga than Key Quest (an astounding feat to be sure).  Also, the letterer really didn’t give a shit if anything was lettered well, centered, or even fucking spelled correctly. Really, this comic reads like someone purposefully made a terrible web manga as badly as they could, and if that's the case, I must say mission fucking accomplished, guys.  The joke’s on me.  You tricked me into reading your God awful manga.

On the other hand, there is an outside chance that the author actually thinks he’s writing a good comic, in which case the joke is on the author.  I could barely find the words to describe how bad the writing is here.

The art is even worse than the writing.  The art is unbelievably bad.  Horrible.  Deplorable.  Most of the time, the frames aren’t even complete.  The characters are literally floating heads or disembodied arms or some other random body part floating through space.  There’s nearly no backgrounds and the anatomy is wretched.  Even worse than that, the screen toning is just plain lazy.  It’s patently awful. 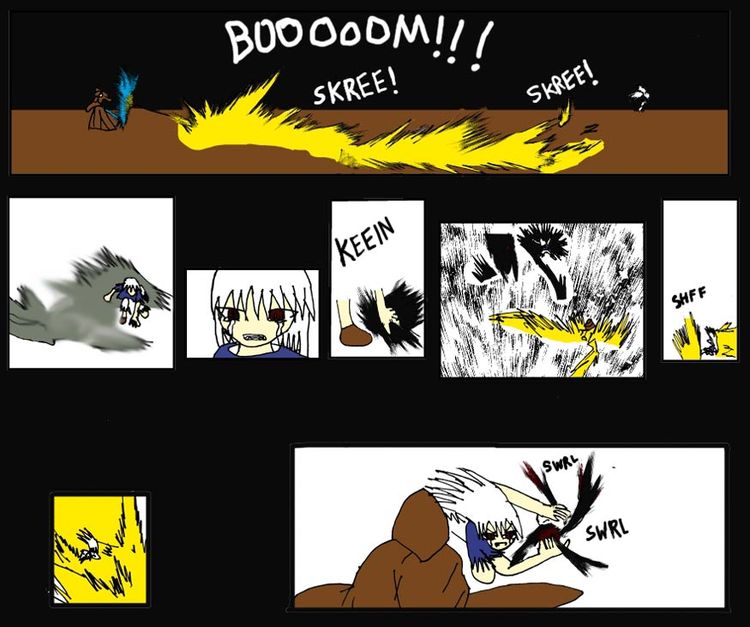 Really, LOOK AT IT!.

Charlie Alexander Luna is either the most incompetent and most batshit crazy (topping almost Imsywimm) comic creator I’ve seen in a long time, or he's an ingenious Well Intentioned Extremist, attempting to create the world's worst comic in order to scare off potential comic hacks...