I ran into this comic randomly, while browsing a comic listing site. Even though it had no banner, the description seemed interesting, so I checked it out, thinking it would be some fantasy dream-like adventure. Then I face-palmed when I saw the abomination. It was nothing like I was imagining it to be. It could be different, don't get me wrong, but in a good way.

And so, the 'adventure' begins.

This comic sucked from the very first goddamn page. Details below.

The comic starts with our protagonist, Chris, jerking off to some porn magazine, while talking to his 'girlfriend', April who gets banged by another guy. Chris ejaculates in his own eye and screams. Then, his douche-bag roommate, Skeve, shows up and starts making excuses that he spent his money on cannabis seeds so he can get 'rich and high as fuck'. Whatever. Then, Chris gets ready for his date with April and slips in the bathroom, breaking his skull open. He ends up in hospital. After a childish argument, Skeve is wondering how the heck is he going to pay rent now, while April is wondering if the doctor is single, so she can probably fuck with him.
Chris is in a coma, or maybe just high, or abducted by aliens(we don't know for sure) and wakes up, then is projected into space by the blood coming out of his open head wound. There he meets the sun who slaps him back on land. Then, some creature that is half-sheep, half-dontknowwhat bites off a piece of his ass.
A fat woman-toad, who's only wearing her undies for no apparent reason, drags him away and there he wakes up to a pair of BOOBS attached to a fucking owl! In the meantime, the creature that bit Chris's ass gets an indigestion and splits into other two creatures. We're taken back to the toad-woman, Gretta, who shows an interest in fucking with Chris. We're taken to some room where Chris meets the 'boys'. The ass-biters show up and cut one of the boys in two, then go and stab Chris. Chris gets angry and shoots fire from his chest. Chris going on a rampage turns Gretta on. Later, they fuck.
Some aliens sneak up to them and one throbs his dick inside Chris's wound, giving him 'manual knowledge insertion'. Chris pukes. Then they proceed to give Gretta the same knowledge insertion in her mouth. Chris leaves with them and some lizard-thing that looks like Skeve follows and stabs at the aliens. Chris becomes totally badass now and fights with Skeve. Skeve stabs him and mutates into something else. One of the dickhead aliens appears and displays his dick laser (no, really!) and destroys the creature. Gretta and the gang comes along and picks them up.
Elsewhere, (still in Chris's mind, I believe) there's a swarm of zombies led by mutant April who are destroying the whatever town that is. Some fighting occurs between them and some girl and I don't really get much of what happens, just that she destroys the zombies and bites one arm off April and then gets killed, becomes a zombie and kills her daddy.

Anyway, we get back to Chris. They're inside their vehicle and the dickhead alien accuses Chris of all the bad stuff happening in their world. Then their vehicle, that's apparently a living thing, freaks out and screeches because it's afraid of something hiding in the bushes. The thing hiding turns out to be a puppy that jumps and bangs Chris's leg, but Chris kicks him. The angry puppy gets an erection and it's dick grows and grows into a huge Rape Beast that attempts to eat Chris. They all run. One of the 'boys' trips, is caught by the 'Rape beast' and gets literally fucked to death. Then, there's 'drama'. They bury the poor bastard and Chris cries. Wah wah.
They visit 'Cow Town', where they are greeted by a cow-thing who's banging some guy in the ass. The cow-thing sees the owl-tits and gets all excited.

NOT going any further! Screw this. I've already said enough. 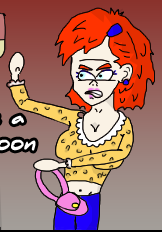 The art...no. I'd say the visuals of this comic are just grotesque. The characters are distorted in the worst way possible and I wouldn't say the anatomy is bad. It's simply nonexistent! Plus, the guy draws dongs or tits on everything. (OWLTITS, anyone?) But more likely, DONGS. You will see a dick on almost every damn page. On almost every darned character. Even this mobile is dong-shaped. And they are not even drawn right, figures.


The only good thing about the 'art' is that you can tell the characters apart, but that is no thanks to consistency, that is as sublime as the anatomy here. As you can see, this comic is in full color. Very saturated, at that.
But let's get to the point:
Most of the characters here don't even have fingers! Or sometimes, they will have fingers on one hand, but not on the other.
Proportions of the characters change dramatically from one panel to another. Chris, for example, is supposed to be 20-something from what I'm getting. He looks like a teenager on the early pages, then he shrinks to a 10-year old, then he's a baby, then totally muscular. But most of the time, he looks like he's 8.

Some of the many faces of Chris through the comic.

Consistency is a myth in this comic. The character's faces are like blobs that will change shape with every panel.
This guy can't draw women. Scratch that. This guy can't draw ANYTHING, actually.
You know what's worse than unappealing visuals? Unappealing visuals that are copy-pasted. (like here or here.)
All in all the 'art' is lazy and crude and it hasn't improved a bit in almost 2 years. The sad thing is that the guy isn't even trying to improve.

The writing is as bad as the 'art' here. All the characters breathe swear words, worse than an old man with the Tourette Syndrome. 'Fuck you' is probably the most commonly used line in this comic. I'm not exaggerating!

This comic is trying HARD to be funny, by using swear words. Because apparently, people yelling "fuck u" at each other all the time is hilarious. Let me tell you, it's not. They're just hilariously stupid.


There are also a few attempts at drama in this comic (like here and here), but you can't take them seriously in the current setting, let alone feel sorry for the characters. You will just facepalm. If you want to go for drama, just don't use it in a comic where the "victim" just got eaten by a giant dick.


Skeve is the roommate who never pays his rent and takes advantage of Chris. He has the ability to mutate into some green-monster-thing when he touches blood.


The Boys are a group of aliens, friendly with Gretta, all forgettable.

The setting of this comic is supposed to be Chris's mind, apparently. But for whatever reason, stuff also happens elsewhere (we don't know exactly where - on another planet, perhaps) and some evil projections of April and Skeve are 'out there' to get Chris for no apparent reason. Really. We're not really told where we are. We don't even know for sure if Chris is still in a coma or if he was abducted by aliens and thrown into space.

This is "writing" the same way falling down a flight of stairs is "dancing".

I don't know much about this Rick Colbert and I didn't really care to search.
He says somewhere that he's 28 years old (I sure hope he's joking!). He also used to run another comic, called "Married Life", that was equally bad.
The only thing I know for sure about him is that he can't draw for shit and has an obsession with dongs.

This is one of the worst webcomics I've ever come to know. It's the kind of stuff that only preteens who just reached puberty would find funny. It's the kind of webcomic that I thought only a bored 12-year old would come up with as a lame joke. It isn't dramatic, it isn't funny, it isn't 'horror' and definitely isn't 'shocking'. It's just dumb, gross and heinous. The only 'humor' present is: "Look! a PENIS! LOLOLOLololololol". I'd say: Don't read it! Your IQ will drop with every page.

It's beyond saving and any attempt to improve it would only make it worse.

It's been quite a chore going through this shit, let alone reviewing it.