This review was deleted and restored. The circumstances surrounding this are unclear and everyone involved can not be contacted at the moment. From what I can tell, after this review was made, it was contested on the grounds of not being good enough and being needlessly offensive. Then it was discovered that the creator of Harkovast actually has an account on this site with which he made the review for I Fell Down the Stairs, which is made by some guy named "Kevin" with whom he makes another webcomic in which they both review other people's webcomics. When an attempt to revise the review was made, its original creator began reverting the edits repeatedly without explanation.

It is unclear whether these reviews were written by these people, and if so, whether they wrote them about each other as a joke, a result of an actual dispute, or a ploy to get attention. It is also not clear if it was deleted for being bad, just lost when the site was hacked in 2011, or as an attempt not to buy into this lame scheme. All that is known is that the review, as well as information about who made it, is gone and the creator of this webcomic was banned.

I recently found this incomplete copy of the review on the Harkovast forum, copied and pasted it, removed the parts of it that were deemed as bad by the people in the thread discussing it, rewrote what was missing and did my best to find links fitting for the places where it was obvious the text was supposed to be linked to something. Some of you may say that if we suspect that these reviews were made by the comic's creator and his friend, then we should just delete them. But, as I was looking up the webcomic to try and understand what happened here, I realized that it is already somewhat renowned for being bad. So if this is indeed an attempt by these people to get attention for their webcomics, they have done such a fine job of bashing each other that I have no qualms about keeping the reviews.

Luckily, both webcomics are so irredeemably inept that even if, by some miracle, the reviews of them would somehow lead to thousands of additional pageviews, it would still not gain either one of them a single fan.

UPDATE: The creator of this webcomic saw his review is back and confirmed our suspicions. He and his friend just wrote the reviews about one another as a gag/attempt to get more hits.

Have you ever played a bad RPG with shitty animation and thought "Oh man, I wish this were more boring, and also a webcomic!" Well, thank your lucky stars, because Harkovast is here to plug that hole. Complete with long, drawn out subplots, boring characters, and more races than any story could possibly need, including one called "The Nameless," which is... yes, I believe that's a name. Reading this webcomic is about as enriching as unclogging a toilet with your bare hands.

To say that Harkovast has a downfall suggests that at some point, it was riding high - this is sadly not the case. Right away we are hurled into this over-dramatic story which throws too much at you too soon. On top of that, the art is awkwardly proportioned, the action looks wooden, and the dimensions are more often than not totally off. While the art gets slightly better as Harkovast progresses, the story just devolves more and more into the equivalent of an author jerking himself off with grandiose storylines that try way too hard to look cool.

As told on the front page on the webcomic itself:

All of the nations of the West have fallen to the Enemy. Soon He will put forth His strength again.

Gotta love the random capitalization! It helps things to seem more important. Not the enemy, the Enemy. We're not Fucking Around here, this is Serious.

He will strike next against the southern nations of Vellastrom. These noble peoples have battled the Enemy for generations, but now they squander their strength on petty squabbles over land and power. All the time they grow weaker while the Enemy gains strength with each passing day.

Look buddy, I know that you just got fired from your job of writing descriptions on the back of Final Fantasy cases, but do you really need to start off so overly dramatic? Oh well, at least you didn't torture us with a cliche line like "The time has come."

The time has come for a stand to be made.

And now, the reader knows: "I am fucked."

It has fallen to me, Quinn-Tain of the Wizards of Eldex, to lead the defense of this world.

All right, all right, start the Goddamned webcomic already!

Great. I can't wait. Could that have possibly been more bombastic and pompous? Dear Lord, is it okay if I read the webcomic now? Or maybe you have another novel you'd like me to read first? 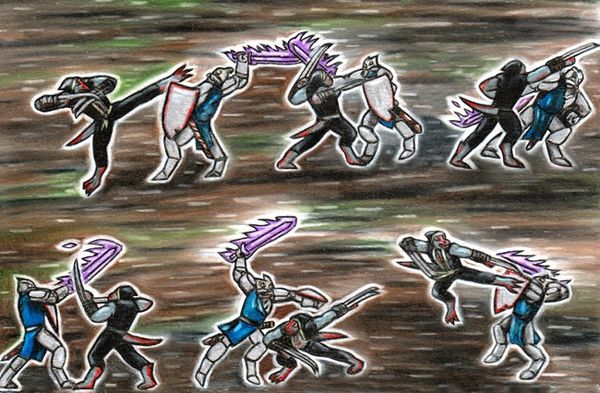 Overcome by the hardships of war, the soldiers unwind by engaging in interpretive dance.

Harkovast is hand drawn and colored, and by the looks of it, it is the work of an arthritic 96-year-old. I have never seen such a poor understanding of dimensions in my life. What kind of a hero has such awkward limbs on an equally wooden-looking body? The stupid kind, that's who. If I was some sort of mythical creature (or worse yet, a helpless character in the world of Harkovast), I would rather be raped, tortured, and burnt at the stake than be saved by some limping, clunky freak who looks like he was drawn by a blind infant.

Another big problem is the fact that with such rigid looking characters, the fight scenes are invariably going to look like shit. What the hell is happening here? is he trying to fly? And for that matter, what the hell is this? Is he running? Doing the Charleston, or some bizarre variation of a Riverdance? The dimensions often look odd too, like here. It's fortunate that the page is actually titled "Kick," because otherwise I would think that he was on a Back to the Future hover board!

UPDATE: The webcomic is no longer in color, but is now black-and-white. Reason? The woman who colored the webcomic has quit, not being paid for her work anyway. The unfortunate result is that it only amplifies the stiffness, poor proportions, and inept depiction of action. Why this author has bothered to go on with this hackwork for so long, and why anybody even reads it, is anybody's guess.

One thing the author is a bit too predisposed to is stopping everything so that we can listen to someone blab on and on about some aspect of the story's background that he couldn't think of a more imaginative way to introduce. Every time a new character shows up, they have a story that goes on forever. It isn't long before "hey, a new character" becomes "OH THANK GOD, THE NEW PERSON HAS SOMETHING TO SAY." And seriously, they do not shut up. 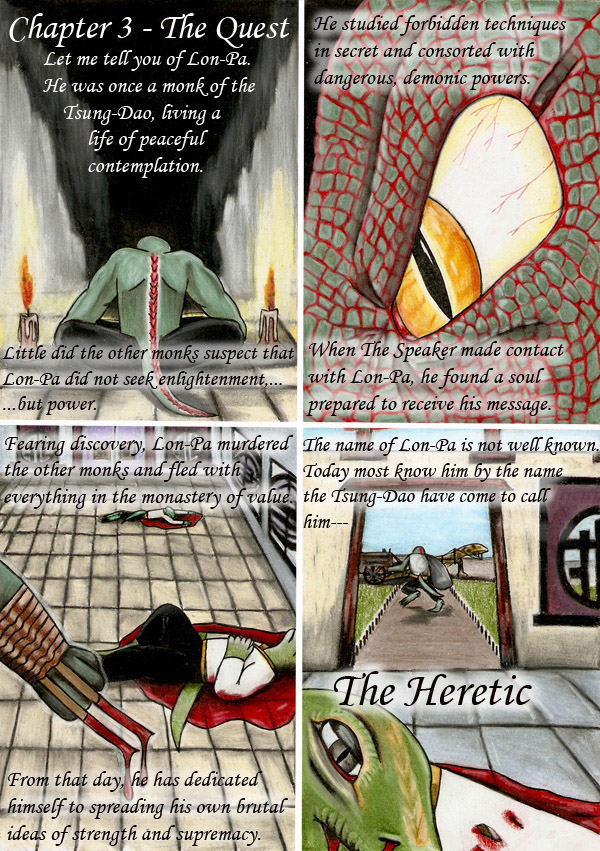 Never say in a few words what you can say in a wall of text.

If you've ever played an RPG, you know the drill. Oh no, the world's going to end, we have to bind together and save it. Usually there's some interesting twist as to WHY the world is in peril, but here it's just a matter of stopping THE ENEMY, with no clever twist in sight. It's fight scene, then "BLAH BLAH BLAH," then more fighting, and then more "oh shit, the reader should know what's going on! I'll just have one person say everything and have their dialog occupy the whole page."

Mr. Daniel Stribley says very little about himself in his available biography, other than to talk about how "epic" and "elaborate" his webcomic is. He also proudly displays evidence of his winning Drunk Duck's Best Anthropomorphic Comic award, which is about as prestigious as an award that comes with a card reading "World's Greatest Grandpa."

Unless you're into the idea of alternately trying to decipher poorly drawn action sequences and sitting through meaningless blabber, Harkovast is most definitely a webcomic you should avoid.