A Cracked article on The 5 circles of Webcomic Hell led me towards this so-called "Christian" comic, but I could have found it just about anywhere bad webcomics are found. Cracked mentioned that they found it on Comedy Central on its Indecision Blog, so you know they struck comedy gold when they found this!

This comic started in the year 2001, most likely after the September 11th attacks. Not that that's a bad thing; many Americans desired to show their patriotism after the tragic attacks. Unfortunately, a lot of people also used this to act like screaming, hateful, shit-heads, as this comic attests. Some efforts at patriotism took a turn for the outright bigoted, as many Americans started to believe that not just radical Islamists, but all those who believe in Islam are horrible, horrible people and the only reason we should be nice to them is out of political correctness, and since they don't believe in a Christian God, they're obviously on the side of war-mongering criminals, like those dirty, Godless, socialist liberals we hear so much about on the local right-wing bigot radio show.

Hal Lindsey Oracle Cartoons quickly goes downhill the moment the writer starts expressing his "religious beliefs" (read: thinly veiled racism), as he so tastefully does here, which also leads me to wonder what the hell is the meaning of that comic I just linked? Is that guy a blasphemous piece of crap for not having a sheep that's got white wool? Is this some kind of racial jab where the only acceptable "sheep" is a white one? I'll get to that later in the writing review... 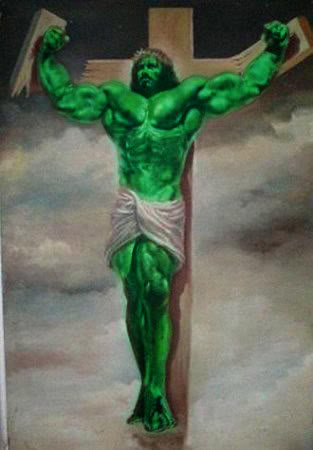 Yes, the power of God is indeed powerful. Hal Lindsey thinks it's so powerful that he can pretty much replace anything resembling a coherent story and plot with mindless fundamentalist-type Christian rhetoric. Amazing! It can do quite a lot, ya know? Don't believe Hal Lindsey? Well through the power of God you can figure out where you wish to go in your life (or die if you chose the wrong path), how to defend ourselves for when the end of days finally arrives literally on our doorstep, and what you should do in case of fire. Why, it even helped our former President Bush when he alone had to support the world, through the power of prayer he was able to violate the rules of war, torture fellow human beings bringing us down to the level of terrorists, fuck the whole American financial system up, cheat his way into office, find WMD's in Iraq create another war to line his and big oil's pockets with an endless amount of cash, spy on his own citizens, and in general create a near tyrannical dictatorship not unlike that of Nazi Germany where nobody was allowed to question whatever he did least they be considered "Unpatriotic" and told to leave the countr...

...OK, sorry, I'm projecting here. But, yes, the 'Power of God' as idealized by Hal Lindsey is in great abundance in these comics as it has the power to blind the two masterminds behind this into thinking that keeping a Holy Bible to your chest will not only fight off terrorists, but it can probably also deflect a bullet that's shot at you. Yes, America's only true defense is prayer, duh. got a problem in your life? Pray. Fear is literally outside your doorstep? Pray. Your friendly towelhead Muslim-American (phew can't forget to be politically correct) neighbor smiles and waves to you as he mows his lawn? Pray! Being held up at gunpoint by a thug who wants your money or your life? PRAY! And try not to crap yourself in fear whenever you have to pray, Muslims and thugs get really pissed off and can smell that sign of fear from miles away!

That is what I would say if I were Hal Lindsey, apparently. In all seriousness, I'm fairly religious myself. I do believe that there IS a higher power somewhere out there and I wouldn't want to fuck with it, seeing how it gave me life and all that, but there's a saying that "You can do more with 2 hands in motion, than with a thousand in prayer." Meaning that it's better to achieve your goals by working towards it than relying on a higher power to constantly guide you in your life. A little faith here and there isn't a bad thing, but reading this comic makes me think this guy is constantly praying for better things to come along in his life while sitting in front of the TV and watching Fox News.

Surprisingly enough, it's not that bad, but the fact is that, like most political cartoons, Hal Lindsey's "artworks" are butt ugly caricatures with some bullshit meaning attached. This is a butt fuckin' ugly comic, even more so than other political comics. Most of the time I don't know who or what I'm looking at since he makes every character horrifically ugly, including baby Billy Crystal, er, Jesus. Of course this art style leads to some unintentionally hilarious moments like God about to drop his gigantic infant son onto an unsuspecting town (That shaking text also adds this effect), a whole bunch of people stripped down to nothing but black underwear in front of a government office, and former President George W. chasing a democratic mule on a wave of blood! Even when the artist here tries to take his work seriously it ends up looking like he traced his work from somewhere else, for example: this has some finely made heads of big cats, but looking at it's feet makes me wonder if it's wearing those fuzzy bedtime slippers.

All that detail into a rather kick ass looking monster, and it looks like it's wearing it's mother's slippers, again that seems to be unintentionally hilarious for me as it totally ruins the message the writer is trying to portray here (that being that the euro is bad or something and we're all going to be under one currency...?), and turns it into a joke. It especially doesn't help when you try to make a point about Global Warming being "a bunch of hot air from Al Gore's mouth", and instead you draw him blasting Saturn with cosmic radiation.

That is also how Al Gore created the Fantastic Four.

We all know political cartoons are basically broken shopping carts: They either veer hard to the right, or hard to the left. This comic, as if you couldn't have already figured out by now, is far on the right with bible in hand and it's rarin' to go a thumpin'. As you saw in the art, the comics are so vague in the art department that it's comical, the only thing that bogs the comic down is the biblical quotes and right wing propaganda. A fine example of this is the left has a political agenda to support terrorism, and to undermine the very way of life in the US. Of course when the writer isn't spewing out that crud, he's spewing out his message of god and how it's the only solution to all of life's trials and tribulations.

Moving up to 2009's comics I bring you back to something I mentioned earlier about a slight hint of racism. Obama was elected president, but our good friend Hal couldn't say no to the classic (and oh-so-American) tactic of painting your enemy (in this case the President and by extension the United States, har har) into a colorfully stereotypical corner. Ol' Aryan Hal ends up saying the democratically-elected President of the United States, elected by the majority of the American people, is un-American because he is supported by women exercising their right to freedom of religion by wearing burkas in public. Scandalous! Along with how bad it is to be unashamedly black, because it's wrong to not be ashamed of the color of your skin. Then we get a Glenn Beck styled projecting of one's own beliefs onto the president, making up something he never said in order to make him look anti Christian (anybody else notice his pupils leaving his eyeballs?), bury God's Word and other laws with his "EFT" stick, and "Jerusalem-ing" a guy. (Seriously, does that not sound like something you'd expect from Strong Bad?)

This one I don't get though. Since when is PeeWee Herman black, and when did he start holding babies up at gunpoint? 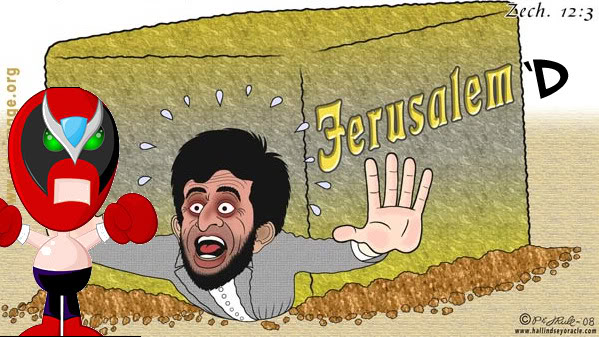 Overall Hal Lindsey's magnum opus is a nightmare of Biblical proportions. It consists of Bible verses whose meaning is stretched like taffy in Lindsey's incompetent hands, along with right wing fear mongering, making it a pure Hell to read unless you believe all of this fundamentalist insanity and keep a Bible next to your gun in your nightstand. The only thing redeeming about it is the art which, in spite of its hilarious badness, is still pretty damn ugly!

I think it's safe to assume that the author of this webcomic is highly xenophobic, a bit racist, and an all around nut job who would be all too quick to pull out his Bible to lecture somebody on how sinful they are. Actually, one TV Troper happened to mention something very interesting about ol' Hal Lindsey, he's actually a pretty famous person, don't believe me? Check out his very own Wikipedia article. Reading it however does prove one thing to me after reading this...

"Obama is correct in saying that the world is ready for someone like him — a messiah-like figure, charismatic and glib ... The Bible calls that leader the Antichrist. And it seems apparent that the world is now ready to make his acquaintance."

WOW I'm not a fan of politicians myself... but I think I'll draw the line at calling somebody SATAN!

The artist behind this comic is pretty damn stupid as well for drawing this shit, he has no idea how to construct a human face without it looking like one of those terrifying porcelain clowns, and can't even draw a decent background without slapping down some awful gradients or texture from Photoshop. Sloppy sloppy work my friend.

UPDATE: The webcomic seems to be gone. But the website does have a sales page for Christianity-related items.

After writing this review, I am most certainly going to Hell, but I did read Billy the Heretic. So I became Hell-bound long before the review. 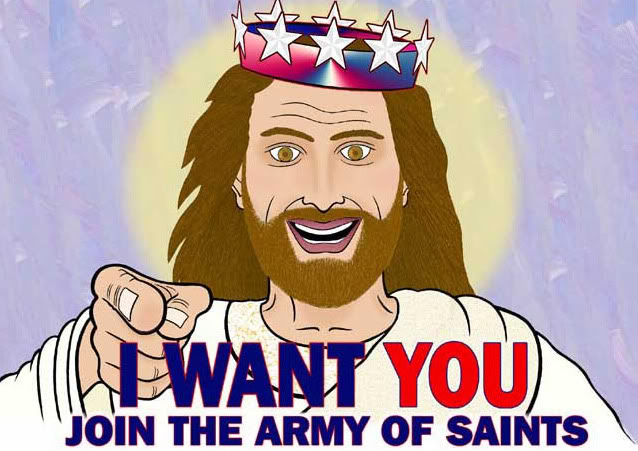