UPDATE: This webcomic has been rebooted into an entirely new format. Instead of pages of strips to click on, we now have a text story with strips inserted in between. Artwork and subject matter are the same as before though.

Hailey Flower was brought up on the BWW forum and I decided to review it out of the sheer novelty of its horribleness.

The new webcomic manages to be creepier than the old one.

This was originally created as a gag strip (in more ways than one). Since that time, the original webcomic was scrapped entirely, and the new version has strips interlaced with text (explained im more detail in the "Writing Review" section).

In this incarnation, the story begins with Hailey Flower being interviewed by her agent Angel, who informs her that she is now hosting her own TV show. Hailey celebrates by farting on Angel. Hailey returns home to Day, her lesbian lover, and they celebrate by farting on each other. Later, they go to the TV studio to meet with the bigwigs and there is more farting, and Hailey goes to visit friends at a bar, and does plenty of farting while there, and Hailey and Day go to visit Hailey's mother, who also loves to fart and be farted upon. Mother and daughter fart upon one another, then Hailey goes to fart upon her 13-year-old brother...

If you think I'm going to bother following any more of this story, you're crazy. 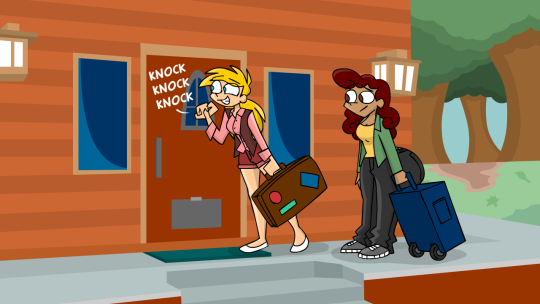 A rare picture that doesn't show anyone actually farting or breathing fart gases.

Geometrical line drawings with blocks of color, with little detailing and shading and minimal backgrounds for the most part. The author does animations which he places on YouTube, so his static drawings would naturally be like the pictures he does for the animations. His animations, like his pictures, are styled after cartoons such as Phineas and Ferb, Total Drama and most of all Danny Phantom.

As the author admits, this is not a fart joke webcomic, but a fart fetish one. What does that mean? Let me elaborate: 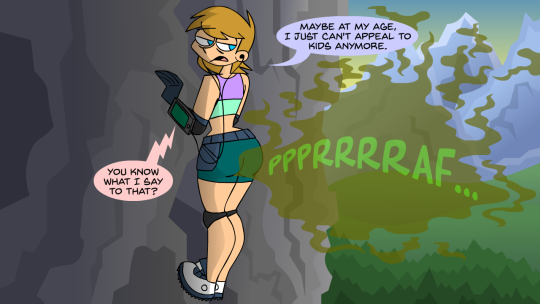 This is what this webcomic is all about.

Most of the webcomic (text as well as illustrations) almost continuously depicts farts and fart sounds and greenish-brown fart gases and people being sprayed with them all the time and people actually enjoying having it happen to them (the women anyway), in some instances to the point of sexual arousal. This is not lowbrow frat-boy humor; this is taking a scatological theme to extremes, the way Kit n' Kay Boodle takes furry pornography to extremes by having all the characters being naked all the time and having sex every single minute. Are there really people other than the fictional characters in this webcomic that enjoy being farted on, and even get sexually aroused by it? Perhaps there are. Are there any shit fetishists besides James desperate enough to get off to this webcomic? I doubt it.

Pages are structured so that there are several strips with text sections between them. The strips are not meant for illustration; you see a strip, then the text describes what happens next, then there is another strip as part of the story, then more text, and so on.

What Oddguy has to say about him: 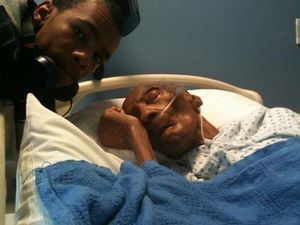 In case you wanna know what James looks like, here's a picture of him seemingly taking a selfie with a corpse.

I'll try to keep this brief because if I go into detail about every single thing he's done then this section will be about 70 times longer than the rest of this article.

James was a YouTube cartoonist who made a show about Sonic characters fighting MLP characters (he only needed to add Homestuck characters and his cartoons would literally give you autism) and was involved in a minor drama when one of his cartoons implicitly threatened to murder the director of Teen Titans GO!. He only became infamous when, in a Tom Preston-esque twist, people on 4chan's /co/ noticed a striking similarity between his art and that of a fart fetish comic (not this one but its predecessor)... You can all guess where this is going.

From that moment on James has been in a perpetual state of meltdown, in which he shows everyone what a giant douchebag he really is. He first tried to delete everything and thereby confirmed it was really him, then he overreacted and threatened to commit suicide, but eventually decided to instead own his creepiness and embrace what a gross asshole he is. He made a bunch of asking-for-it cartoons directed at his trolls, which he later deleted, and revealed that he has had a fart fetish ever since a female friend of his farted on his head, which she still does believe it's just a joke because she doesn't know James jerks off to it later. He then got defensive when people pointed out many of the cartoon girls he draws farting and jerks off to are pre-teens, but after promising not to do it again continued anyway. Still, his pedophilia wasn't confined to the realm of fantasy and he was soon revealed the be e-dating (and some might say "grooming") an underage girl. In his most recent debacle he made some rape jokes at a female artist at an SJW infested MLP convention and then tried to buy her off by buying her art. Then, when he was invited to speak at a panel, retold the story paining himself as a victim and implying she manipulated him to steal his money.

The playing the victim thing is important because I also want to talk for a moment about James' attitude, which schizophrenically shifts between obnoxiously and ostentatiously confrontational, to self-pitying and pathetic at the first hint of criticism. He spends half of his time online being a dick to people, and the other half crying and accusing people of being out to get him, trying to garner pity by divulging his inner monologue that interprets any form of critique of his art or of his person as a vicious insult, worthy of either suicide or everlasting vengeance.

It's funny that James is young, black and skinny because, while visually being polar opposites, in all other ways he and Tom Preston are exactly the same person.

At least this webcomic says upfront what it is meant to be. But that is the only good thing to say about it.

It should be noted that all the farting is done by the female characters of this webcomic, and only the women in this webcomic are enjoying the farting. It's women farting on one another and enjoying being farted upon, and even mother and daughter enjoying each other's farts-a sort of incestuous relationship I suppose. Shockingly enough, none of the males blow farts, nor do they enjoy being farted upon, not even by hot chicks. Which says something about the author and his intended audience.

UPDATE: The author has elected to discontinue this webcomic. In his own words:

"Fun while it lasted

I’ve decided to focus entirely on entertaining my WAY larger main audience. I have this idea for a comic book that I’d like to focus on, plus an animation I’m writing. This whole fart thing truly was fun while it lasted, but it began back when I didn’t really have a large audience. But now that I’m at a point where I have carte blanche to create literally whatever I want to create, and as long as it’s good, people will like it… I’d like to start making more good stuff. Don’t get me wrong, Hailey was good… for a fetish comic about farts. But I do enjoy making things that have a wider appeal, so that’s what I’m gonna be doing. Plus, Hailey has become more obligation than recreation as of late, so this was bound to happen eventually. I hope you at least take solace in the amount of fart art I’ve made over the years. Probably enough to last a life time.

I hope you understand, and I hope you enjoy what I have in store."

We understand, Mr. Barkley. We at BWW do enjoy it when you do more redeeming artistic endeavors.