Monster Hunter is a series of video games about a group of humans equipped with ludicrously large weapons and cool armor hunting down monsters. People often complain about its repetitive, restrictive, and outdated gameplay, but for fans (like me), Monster Hunter has a certain magic that enthralled me enough to keep on playing. Despite the excellent setting and hooks, Monster Hunter is lacking in the story department, which is why I'm always out looking for any high quality Monster Hunter fan-works to fill that gaping void. It was during one of these searches that I stumbled upon Guild Adventure.

As far as I'm concerned, the comic fell down when the story stops in favor of droning exposition. The art might have something do with it, but I am rather forgiving (see the "Art Review" section of this review).

The plot focuses on Rago, who wants to be the very best… hey get the fuck out of here Pokémon, I’m trying to review Guild Adventure.

Oh… this is Guild Adventure… how awkward.

In short, the plot is what would happen if Pokémon™ took place in a mishmash of the Final Fantasy and Monster Hunter universes: boy wants to be the best. Boy meets happy girl and her ice-queen twin sister, who taught him about monster unimportant bullshit. The plot is yet to advance from here because of the exposition, but I'll wager it'll go like this: boy hunt monsters with the two sisters, climb up the rank, and fight the ULTIMATE MONSTER (OMG!!!) to gain his position as legendary hunter. There's dangly parts here and there like the lying legendary hero and the standard romance subplot that shows a lot of scuff marks from being crowbarred into the plot.

(With the help of MakarovJAC because I'm too lenient)

All right, let's be nice to the author for a moment before the bile tsunami gets in. He is quite proficient at drawing monsters. And… uh… you know what? I think that’s the only nice thing I could say about his art.

The comic loses points right out of the gate by having a protagonist that is an obvious copy of Sora or Cloud. However, let me talk about his age for a moment. The way he's drawn, you might think that he's yet to hit puberty. However, we are informed that he is eighteen years old. If you’re window-licking retarded, you might ask: did he find the fountain of youth? The answer is no. It's just that the artist draws his head too big relative to his muscled body so he looks like a child. You can't age your character by simply increasing his height or making him muscular. You have to also juggle the head-to-body ratio, secondary sexual characteristics, and many others.

Next is perspective. Take a look at this page and focus on the armored soldiers. Next, let's go here and here (yeah, sorry for that). As you can see, perspective is not the artist's forte. I could go on about the missing torso, missing hand, freakishly long arm, etc. In fact, take a shot every time you see a wrong perspective when you read the comic from start to finish.

To finish up this section, let me say that I don't mind the author trying to go for a manga-like style. Heck, I started drawing because I want to copy manga at first before I started taking anatomy and perspective lessons (the former is useful to some extent even now because I'm in university and taking a medical degree). However, the author failed to realize that only aping anime and manga without learning about anatomy and perspective himself is going to lead him to a dead end filled with dead dogs with his mother standing on it and yelling that he'll never amount to anything.

In other Monster Hunter™ comics (including that awful manga Monster Hunter Orage, courtesy to the man who created the excellent Rave Master and Fairy Tail), the character is usually out on the field fighting monsters at the level of Velocidrome (or Great Jaggi if its based on MHTri) by the 30th page. Guild Adventure, however, assumes that every reader has recently undergone a botched lobotomy and has to fill us in with every unnecessary detail about the world it's set in. Usually, I don’t mind info dumps so much because I read a lot of science fiction novels, graphic and otherwise. However, anyone reading this is probably a fan of Monster Hunter™ and there isn't enough original addition to the world to justify the amount of info dumped on us.

The implementation of multiple sapient species—it gets to my nerve every time people use the term "race" in this situation, but I digress—is also handled quite poorly too. There is no sense of cultural difference between any of the species involved, which make the society feel bland and homogenized. The creator of Guild Adventure admits that he took inspiration from Final Fantasy, which often has multiple sapient species.

To quote Ben Croshaw: "You’re supposed to weave your exposition into the story, not hand the audience a fucking glossary." This is why reading Gunnerkrigg Court or Unsounded is entertaining: discovering the world along with the character is part of the joy. In fact, the exposition only serves to make Rago come across as either thick or he just dropped into the world since he has to get the supporting characters to explain everything to him. 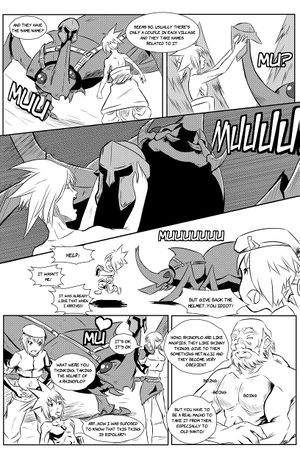 Rago: Just naïve or dumb-as-doorknob? I say the latter. You might also need brain bleach after seeing this page.

Let's ham on the characters for a bit. The protagonist Rago is a living compendium of shitty writing. He is in no way essential to the plot of the story he's the hero of beyond being the inept retard that exists so that other character can explain things to him for the sake of the audience (who, as I already explained, probably know everything already from the games). He also has the shallowest motivation and his love interests are as forced as a constipated turd. Seriously, the sisters who are supposed to be the comics' secondary characters have a deeper motivation and better characterization (not by much, but still) compared to Rago. The fact that one of the sisters is in love with him just gives him a weak excuse for existing. I could tell that he's meant to serve as an audience surrogate and source of comedy with his "lovable" dumb mannerisms, but he fails to endear himself to me. Why? Because the media has been force-feeding me the "idiot hero" stereotype: naive, immature, reckless, etc. for years. Pick any shōnen manga and there's about 70% chance that the protagonist fits into the Idiot Hero archetype. As far as I’m concerned, the only true Idiot Hero is Nobi Nobita of Doraemon. Rago lacked any characteristic that made Nobita such a beloved character or gave him such depth of personality and actual failure caused by his idiocy that made him relatable.

Fans might say that Guild Adventure's writing is typical of the shōnen genre and that I shouldn't complain because I enjoy the genre anyway. In response, I would say "eat a dick". Yes, most shōnen webcomics and manga involve a naïve newcomer wanting to be the best, but the authors make use of clever execution and flesh out their character. By contrast, Rango is so forgettable that the minute I stopped reading this comic I forgot what he looked like and instead imagined Johnny Depp as a lizard.

Aside from the Deviantart and Smackjeeves user page, I've been unable to find anything worth mentioning about the author of Guild Adventure. He hasn't been kicking up any drama like the most prolific webcomic artists like Vinson "Bleedman" Ngo or Jay Naylor as far as I know. Then again, He could be a mockumentary enthusiast as far as I know.

This comic has some promise. It will improve greatly if the author drops all pretense of originality and makes the sisters the protagonists instead of the dumb-as-fuck Rago. The author also needs to stop with the lazy animu and put in some effort, because I’ve seen a lot of artists that do their own signature style despite starting as animu artists. As it stands, Guild Adventure is a waste of time. The action is awful and sparse, the comedy is unfunny, the art is lazy, and the "romance" is too unbelievable and flaky to work.

Other comics by this artist reviewed on BWW