This one was one of the most popular webcomics at my college so I thought I'd give it a look and man, I don't know how this thing became popular.

God Mode has had a series of authors that each replaces each other after the previous one left. Ryan Kerns was the creator and first writer and artist, but then he left and Raven Perez took his place for about a year until the current writer-artist, Adrian Ramos appeared. I couldn't find much on them.

Adrian Ramos might be better known for his other webcomics, Count Your Sheep, Wisdom of Moo and No Room For Magic, all of them much unlike God Mode's previous style of drawing and writing. 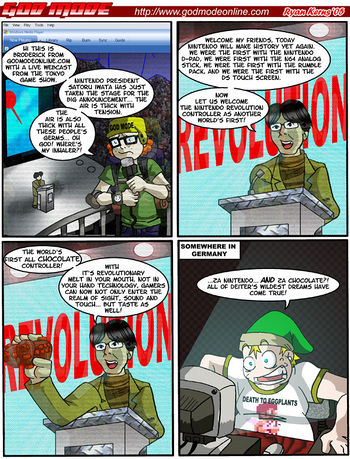 God Mode is about a multi-million dollar game review company and their wacky adventures as they talk about video games.

Since there's been three of them, I will review each one separately. Kerns was a simplistic, fake anime style where Tory's skin was colored weird. Perez had a more cartoony style with an intent on inflating the chests of all the females. Ramos on the other hand, brought the women back to a more normal look and Tory's skin color doesn't look weird any more with a simple style.

The first is the Ryan Kerns era. So be prepared for tons of unfunny jokes where Kerns shows an over reliance on wanton violence, bad sex jokes, 80’s references, and tasteless gross-out humor. Those things can be funny, but at least put some style in the violence.

Too bad the cast can’t save this wreck. I know, I know, "God Mode is a joke-a-day comic," and one can complain that you don’t need a complex cast to make this form of comic work. Still, some of the best joke-a-day comics like Peanuts, Pearls Before Swine and Liberty Meadows all had moments where the cast was allowed to step outside their templates and present other sides of themselves. God Mode does not do this. Hell, Barrett and Kraig are pretty much interchangeable except that Kraig has a lower IQ. Tory is just the comic’s slutty fuckbait (a character created just for fans to whack off to and other characters to sleep with\lust over). Moru is an annoying know-it-all wiseass and his aunt (who temporarily joins the cast until the end of Kerns’ run) is just a violent weeboo. But the worst is Marceline, another uber-bitch character that the fake manga webcomic crowd just seems to want to put in their stuff. While Marceline breaks new ground by not only being violent, abusive and evil just for the sake of being violent, abusive and evil; she revels in it. It’s like those writers who go overboard trying to prove how evil their villains are with each puppy head they rip off only to feel like it’s forced and it eventually gets boring. Marceline is like that except they’re trying to make it funny.

About a year and a half later, Raven Perez took over. Too bad the jokes were still crap. To make up for his lack of humor Perez upped the sex jokes and vulgarity as well as throwing in some cosplay sex in hopes of getting another market.

To be fair Perez expanded on the characters a little more by getting Tory (whose now a bigger slut) and Barrett together and making Marceline even more violent and sadistic for no reason.

The final and best incarnation comes from Adrian Ramos. He’s less unfunny than the previous two and this is the worst he’s come up within the vulgarity category. He’s also toned Marceline down a lot so she’s more angry and tough than a raging bitch.

I don’t get why this webcomic has so many fans. The females aren't that well drawn to pull in the perverts and I’m sure even the retro-philes that cream their pants every time Dane Cook says Megatron wouldn't keep their interest for that long. Or overall maybe I am the damn snob I sometimes wonder I am. But if it keeps me from putting this piece of crap on my favorites list, I’m OK with it.