This was brought to the attention of BWW by forum user HackerOnHacker on May 7, 2011 in this thread. He described it thusly:

There is nothing more I can say.

First of all, I would just like to state that I'm not a Christian. I did still find this comic to be highly offensive, at first; not because of how blasphemous it is, but because a comic like this should not have over five hundred fucking fans on SmackJeeves. Now, I'm just really fucking amazed and confused that a comic like this can even exist. This is the type of thing that should be examined by a team of scientists.

When I first saw it, I honestly believed it was a troll comic. I thought nobody could possibly be this stupid. But the author's SmackJeeves and DeviantART accounts are all far too elaborate to be fake.

This is Jesus getting raped. This comic has more than 500 followers as of the time of this review.

I guess the downfall would be the second page, when it's made apparent that this is going to be a fucking yaoi slash story between God and Lucifer.

Although, others might say the real downfall is when Jesus gets raped. I'm not kidding.

I can barely tell what the story is. Not because I didn't bother to read it, mind you, because I tried. I can barely understand it because it's so incoherent that it comes across like it was written by a four-year-old. The first chapter is only 53 pages, so go read it, then come back and compare it to this Flash cartoon that's actually narrated by a four-year-old and see if you can tell the difference.

Just so you know, this was written by a 21-year-old who's in college. 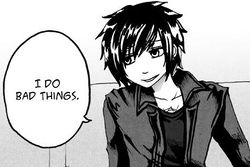 But if you really need to know what it's about, it's about how God created Lucifer out of boredom, then they start making out, then for no reason, Lucifer tries to kill him, so God banishes him to Hell. An unspecified number of years later, he comes back and finds out that God has a son. If you're wondering what Jesus looks like, he's the black-haired kid on this page.

Jesus goes to Earth, then God and Lucifer start making out. The next morning, God puts a bandage on Lucifer's arm to cover up the tattoos or burns or whatever that shit on his arm is supposed to be. Also, Lucifer changes his name to Mortis for some reason. I don't know. Then the angels want to see Lucifer Mortis and determine if he should be killed, even though one would think that sort of thing would be up to God, but whatever. Since Lucifer Mortis doesn't have his wings anymore, they use "the eye" to "see the underlying truth". The bandage that God put on Lucifer's Mortis' arm comes off and they realize that God has sinned somehow, I guess by deceiving them or something. I don't know.

The angels kill God, then Mortis goes on a rampage and kills them all, and they just sort of let it happen. Mortis then goes back to Hell and kills all of his minions for no reason. He then turns his attention to Earth and pulls a Bleedman causes 9/11 while Jesus looks on in fish-eyed horror. This somehow causes Mortis to be reduced to nothing but a hand floating in space.

The chapter ends with two random dudes sharing an iPod on a subway train, listening to Led Zeppelin, which I guess is supposed to be some kind of symbolism, but I can't make any sense of it. There was a passing mention of Led Zeppelin earlier, but I really don't get what it's driving at.

The next chapter starts with Jesus meeting one of his friends at an arcade, then it's revealed that his friend knows who he is, and then he promptly starts sucking Jesus' dick. Jesus quickly realizes that he's Damien, the son of Mortis, and punches him in the face. Damien then rapes Jesus. It's okay, though, because Jesus likes it.

Later, Jesus and Damien decide to bring God and Mortis back to life. They perform some kind of spell that requires Jesus to give up his immortality and Damien to give up his sanity. Obviously, this ends badly. Before bleeding to death, Jesus kills Damien, then we see newly-resurrected God and Mortis visiting their graves. Also, Mortis is a woman now. I don't know. The chapter ends with Jesus meeting back up with Damien in Hell, I presume, and that's about as far as I could stand to read. 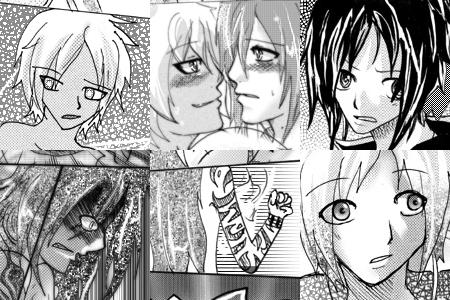 These are all just from the first chapter. In the second chapter, we get Jesus' poorly-rendered dick. Has MoonLover ever even seen a human penis before? Also, isn't Jesus supposed to be circumcised?

More generally, the art is more of the same trite animu bullshit that we've all seen a million times before. Like so many anime-inspired comics before it, every character has the same face. However, MoonLover manages to break new ground by being unable to draw them consistently. Between panels, the character's faces change. One panel, they might look like 12-year-old boys. In the next, they might look like they're ten years older. Chins change size and shape, eyes move around, it's a mess.

"This isn't good. My mouth seems to be melting down the side of my face, you guys."

I already explained how the story is so incoherent that it comes across like it was written by a child. The pacing is so fast and erratic that I get the impression that he was making it up as he went. It actually reminds me of Christian Humber Reloaded, which is widely regarded as the worst fanfiction ever written. For a comic based on the Bible, even as loosely as it is, the characters don't act at all like they should, so there really isn't even a point in using them. It's like if you wrote a Harry Potter fanfiction but made Harry a fighter pilot and made Voldemort his mother. That's how far removed it is. He would have been better off just coming up with something new entirely. Then again, he's doing it in anime style, so obviously, originality isn't his forte.

Now, I know I complained about this in the last review I wrote, Devil's Shine, but really, why does there have to be rape in the comic? I mean, yeah, it's a yaoi comic, I get it, but why do the people who write this shit always feel the need to try to eroticise rape? What the fuck is wrong with you people?

Is MoonLover just going out of his way to be offensive? I'm still not entirely convinced that this is sincere. If the whole idea is to offend Christians, then ironically, he's not even doing a very good job. I mean, I'm honestly just fucking astounded. The comic is so terrible that I can't even imagine anybody taking it seriously. Making God gay for Satan doesn't even make any kind of satirical sense, and since the characters all look like anime boys and don't behave at all like they do in the Bible, then they're only God, Satan, and Jesus in name. If they actually were the same characters, then it might actually be offensive. That is, if that's even the intent. If that is the intent, then I gotta say, he can't even blaspheme properly. 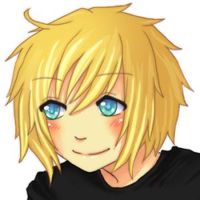 This is MoonLover's idea of a self-portrait.

MoonLover is a weeaboo from Australia. His DA account is full of animu drawings and all of his favorites on his SmackJeeves profile are animu yaoi comics. Including God's Story, he has 24 of his own comics on his account, the most popular of which is Lips of an Angel, which has 721 fans as of June 18, 2011.

While skimming through his DA journal for any mention of God's Story (hoping I could find out the reasoning behind it), I learned far more about him than I ever wanted to know. In this journal dated January 27, 2008, he talks about another comic he did and has since canceled called An Angel by My Side. In it, he says the following:

I'm surprised I didn't put rape anywhere in the story, cause I thought about that a lot... until I had a dream I raped some chick >_>;

In that same journal, he also passingly mentions that he used to cut himself.

Other than that, he doesn't seem like a mean or arrogant douchebag, and as far as I know, he hasn't been involved in any internet drama. His talk about cutting himself and "drinking his sorrows away" makes him come across like he's emotionally disturbed or like he hates himself, but to be fair, I probably can't make an accurate assessment about somebody based on a few brief ramblings. However, he's still an asshole just for making a comic like this and for possibly having a sick rape fetish.

If anything, however, it's a curiosity for psychiatrists.

UPDATE: Smackjeeves has been shut down, and this webcomic got wiped out with it.