While scoping around the internet I found an ad for Geek Blather. Geek Blather? That sounds like a quirky comic about the nerdy aspects of teen life that we all experienced. By the looks of it, it might even contain the rare hot nerdy girl. But I was wrong. So very wrong. Despite being titled Geek Blather, and despite the website being designed with Dungeons and Dragons dice decorating the layout, it has nothing at all to do with geeks, blathering or otherwise. It turns out, that it's the CREATORS who are the dweebs, and they named their comic about their favorite pastimes, instead of, well, the topic of the comic.  To understand how stupid that is, it’s like if F. Scott Fitzgerald had changed the title of The Great Gatsby to “My Wife’s a Crazy, Drunken Bitch.” (His original intended title was in fact "Trimalchio Of West Egg", but the publisher wisely rejected that one.)  Sure that’s what was going on in ol' Fitzy’s life, but that doesn't make a good title for a story about a guy called Jay Gatsby.

Geek Blather is a story that’s far more focused on teenage bitching and drama than on geekery or blathering of any kind.

The story opens on our lovely protagonist, Gwydia (Is that... is that a real name?).  Gwydia starts off the comic by showing the audience she is a kind and forgiving soul, tolerant of minor social peccadilloes in lieu of her own personal struggles.  Ha, just kidding.  She’s a callous bitch for no reason. 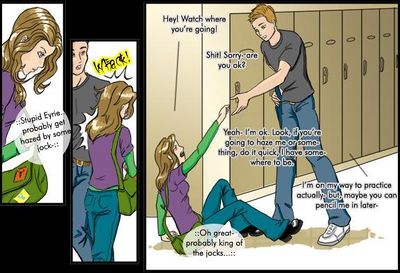 How dare you behave with civility after a minor social faux pas!

This perfectly nice guy bumps into her on accident, apologizes, and she still seems to instantly hate him with a passion. It's not as if he did it on purpose and then mocked her silly name like most other red-blooded jocks would.  Still, poor little Gwydia’s day is ruined by her run-in with the surprisingly mature and courteous jock type.  Some bitching and whining later reveals that her father, the school’s football coach, anticipates having the team at her house that night and guess who’s also on the team!  That’s right, surprisingly civil jock guy or as Gwydia lovingly refers to him, “Asshat.”

What follows is a series of stupid plot points as found in the likes of My So-Called Life, only gayer.  Between Gwydia’s partying with young, gay man-whore (literally) Rae Feoras, more emotional back and forth with Rather-Pleasant-Jock Guy, and even more gay-lavanting with her best gay buddy, Agate.  The whole thing is like a teen dramedy written by someone who doesn't know a thing about drama, comedy, or how gay or even straight men act in real life.  It’s really inept and comes across as some moronic fan girl fantasy to watch KEWT BOI AFTER KEWT BOI kiss and cuddle.  *Tee Hee!*

Given the writers’ depiction of human relationships, they might as well change the name of this comic to Geek Shut-Ins.

The art is somewhat capably done, but it could certainly do a lot better.  Between anatomy mistakes, lame character designs, lazy backgrounds, lousy lettering, and horrid pixellation issues, there is much to be desired.   Observe:

The artist seems to make quite a bit of mistakes with anatomy such as proportional issues, odd facial renderings, and occurrences of can’t-draw-hands syndrome.  I want to say these issues scream to me that someone very inexperienced is handling the artwork, but the comic has been running for at least three years under the same artist.  It could be worse, but the artist really needs to dedicate some time to learn correct anatomy, draw out the damn backgrounds (instead of substituting solid colors or fades), take a class or two in color theory (because this comic has zero atmosphere) and for fuck’s sake, upgrade your digital art tools.  Pixellation in comics is not okay.  At all.  EVER (No, sprite comics are not the exception because they are rip-offs of existing artwork and are fuck ugly anyway).  And don’t give me the excuse that Photoshop is expensive, because there are alternatives out there for the frugal artist.  GIMP is free.  Paint Shop Pro (Windows) averages $100 and Pixellmator (Mac OSX) is about $80.  There are tools out there available that could have you out of pixellated land in no time, kiddo.  Invest in your fucking comic because you owe it to your ideas and your audience to make them the best that they can be.

Gwydia reacts to Rae’s homosexuality with repulsed indignation because she won’t get to seduce the town whore. Poor Gwydia :'(

The characterization here relies heavily on stereotypes and female shut-in fantasy elements.  All the guys are at least bi-curious and the lead female character gets to be the biggest bitch in the universe and get away with it.  In a small way, it’s like Least I Could Do for fan girls.  Gwydia Sue is an unthinking, hypercritical, judgmental bitch as evidenced by her constant shrill taunts of Otherwise-Nice-Jock-Gentleman (formerly known as asshat), whining at her gay BFFs Agate and Rae, and intense belief that the world revolves around her.  This makes her very unlikable and very hard with any reader to connect with (unless said reader is, too, a fan girl shut-in).

Aside from Gwydia being completely insufferable, the rest of the cast is a bunch of paper thin stereotypes.  From gays to Mexicans, no special interest group is safe from the myopic world view of the shut-in fan girl brigade.  Seriously, ladies.  Would it kill you to do a lick of research in getting to know what these people are like?  Don’t you understand that these people have feelings and are not to be treated like foolish clowns, cheap strumpets or petty criminals?

Any attempts at a storyline seem self-serving and obnoxious.  Any attempts at humor are stale (except outside the comic).  This really is nothing more than a teen drama written by someone who has no real idea what teens are like.  Overall, the comic is pretty much Twilight with no vampires, less plot, and instead of Sparkly Edward™ being the abusive one, it’s Gwydia.  However, if I’m unable to convince you with mere words how bad the writing is, the following examples will remove all doubt:

There is very little the Geek Blather website can teach us about Quinn Gillespie or her partner in creepy fangirldom, Karen O'Brien.  What we can ascertain about these women can only come from the comic itself.  They are frightening, nerdy shut-ins who are too busy focused on making scribblins’ about sexeh gei spr@klyy menz to try and create an interesting, compelling storyline.

Fortunately, there is hope for these two.  I’m sure socialization isn’t impossible even for these fag hags.  After all, Jessica Cantloupe’s still got a pulse, right?

This comic had potential in title alone.  While internet readers hold their breath and hope for some geeky fun and light-hearted tomfoolery clicking on the link, what they find is a teen drama starring the most insufferable teenage bitch webcomics has seen in a long time (entire Penny and Aggie cast included).  This webcomic can't be saved. The damage is too deep. The only thing left we can do is amputation.

UPDATE: Well, the authors evidently agreed and have concluded their webcomic.