Oftentimes, I am hesitant to review webcomics that are no longer updating. Even more-so am I reluctant to review ones that have not only ended but have also had their creators vanish off the face of the Earth (or the internet at least). When this happens, I remind myself that the purpose of this wiki is not to berate and annoy awful webcomic artists, but first and foremost to give aspiring webcomic artist tools to recognize and avoid horrible mistakes that can ruin their comic and reputation.

"Gamer Chicks" is a classic of bad webcomics. Besides, it is such an atrocity in every way that, even if making fun of it has lost its relevance long ago, it is still worth writing a review about. This also applies to its sister project, "Lesson in Distraction".

This comic is trash and everything about it is wrong. That is why there isn't really a "downfall" per se, but there are low points. Specifically, when she makes a comic as a reply to some guy who posted a rude comment on her DA and draws herself as a tactical-rape monster with a strap-on penis, or when she mentions her ex-boyfriend whom she names simply "Evil Ex Boyfriend" (I guess breaking up with an annoying weeaboo makes you worse than Hitler), making sure to mention in his character bio that he is unemployed, or when she responds to people who make fun of her for being a pervert by telling them they are sick because they probably jack-off to Tifa from Final Fantasy VII (I prefer Aerith), thereby both admitting to them that they are right about her and simultaneously judging them for the same thing she is guilty of, and then she tells them they have a small dick (or a huge one since she is making a gesture meaning "small" with one hand, but pointing to a big censor block with the other).

I don't even know how to review something this bad. Instead, I decided to just make a collage.

As you can tell, everything about the art is wrong. It's not that the art has flaws; it's that she literally does not know how to draw anything! If I had to give this "art style" a name, it would be "derivative anime for the hopelessly incompetent". Make no mistake, there's nothing wrong about using an anime-based style. Except when you use it as a crutch, it's wrong. The comic is a barren wasteland of snout noses, ball-shaped hands, non-existent backgrounds, and eyes overlapping hair. Also, her self-insert character looks nothing like her and is also wearing a hat with wings, a tail, and cat/bunny ears on it like she couldn't decide which cliché to go with.

But her true masterpiece has to be this strip:

What the fuck is "Game Spoot"?

So she is caught outside in the rain wearing a white top and runs into a GameStop to take shelter and is attacked by a giant laser cheese!!! Apparently, this store has a car sized sponge laying around that shoots black sticks at people who have an extra pair of eyes growing over their hair.

The comic doesn't really have a plot, so let's skip ahead to the writing and humor because this is supposedly a comedy strip.

The writing in general is atrocious. Besides the fact that she has yet to learn that text goes left to right and top to bottom, she also believes it is acceptable to signify characters emotions by adding emoticons to their speech bubbles.

None of the strips have a point. None of the jokes are funny. Half of the time there isn't a punchline and some of the time there isn't even supposed to be one because it's just a random drawing or her detailing what she did at some anime convention. When there actually are jokes, it all reads like she just went around collecting all the old non-jokes that no one ever actually laughs at and found ways to make them even worse.

As you can see, none of this is even remotely funny, but let's dwell on the last one for a moment. Teresa has a weight problem. Now, don't misunderstand, I am not mentioning this because I like making fun of fat girls (even though I do). I am mentioning this because much of the comic revolves around the notion that she is a sexy gamer chick and her having to fend off all those silly boys (tee-hee~), even though it's not true. If I had to guess, I would say that this is a sad attempt to shield her ego, but there is another option: have you ever met one of those really fat girls who thinks she's hot because she has big boobs, despite her stomach being even bigger? It's kind of like that, but in comic form. Whichever hypothesis is the correct one, the one thing that is certain is that she does not look like the character that represents her. In one of her Y!gallery journals, she mentions that she has DD breasts (possibly DDD... I am assuming that's a typo) but she also looks really short, weighs 180 pounds (according to her) and, judging by her pictures, I wouldn't be surprised if she actually weighs a lot more than she is willing to admit. But besides her being annoyingly (and unjustly) proud of her looks, there is another problem, and the problem is that she is one of those girls who thinks playing video games somehow makes her special or more appealing to men (which is especially funny because, judging by her comic, it's obvious that she doesn't actually know anything about video games). It's part of the reason there is so much nerd rage about these so-called "fake geek girls", some of whom hardly care about video games and just use this particular sub-culture to whore for attention.

By the way, according to a 2012 survey by the Entertainment Software Association, 47% of all gamers are female. So no, you're not special.

Lesson in Distraction (her other comic)

I was thinking of writing a second review for her other comic, but it's too short and I will probably just be saying all the same things I said in this review all over again. Still, it's so bad that I figured I would write a short "mini-review" about it here.

"Lesson in Distraction" is Suirenoki's comic that, instead of being about her actual self, is about a self-insert Mary-sue. In it, she is a foreign exchange student who all the popular girls pick on because she's fat... except she isn't. Don't get me wrong, Teresa is fat. VERY fat. But she draws her character, who we are told is fat, to be skinny and attractive (to the extent that her limited art skills will allow, anyway), which is pretty hilarious since she draws that character exactly like she draws herself, meaning that she realizes she is not attractive, but even when she is complaining about people making fun of her looks, she cannot bear to actually draw herself as anything more than a size two. Also, she is being picked on because she has red hair or something. Anyway, one of the popular girls throws gently cracks a raw egg (that she apparently brings with her to school) on the back of our heroine's head. Teresa calmly tells the bully that she has as much right to go to this school as anyone else in a way that was supposed to make her look calm and rational, but instead makes her look like an autistic without the ability to emote. Then the male protagonist/love interest/Sephiroth-as-drawn-by-an-arthritic comes and saves her. He is a dark, brooding, Japanese exchange student with long white hair (maybe he's old; I can't tell due to the animu art style) who tells the other girls to fuck off.

Later, she is walking around the street when she is confronted by her old arch nemesis...

A GIANT BLOCK OF LASER CHEESE!!!!!

AND IT SHOOTS ARROWS NOW! 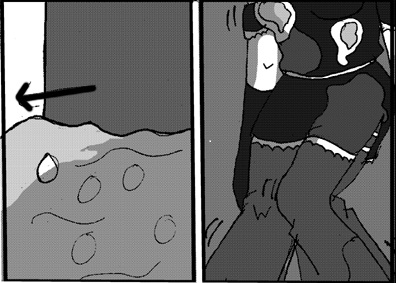 The bully from school finds her in the middle of the street somehow. She then beats her up and breaks another egg on her head (does she have a fucking grocery store in her pants or something?) ...or maybe it's someone else? I'm not really sure since everyone has the exact same face. It might just be some other girl who is attacking her for no reason and who just happens to be carrying eggs around. Who knows?

So anyway, the hero (who also just happened to be there) comes and saves her from what looks like a blow up doll. Then she tells him she doesn't know where she lives because she is lost. There must be no cabs in "Foreign Exchange Land" because he invites her to his home instead of just calling her a taxi. She has a shower scene where we see her hips are deformed like she has polio or something, he lets her sleep on the couch like a true gentleman, she makes him breakfast, and the story abruptly ends... oh, and he is also a vampire, and she is some kind of wolf goddess and has kemonomimi. So, if it had continued, this comic would have soon become something between a furry comic and Twilight for the brain-dead.

Here is a summary of my impressions of this comic: 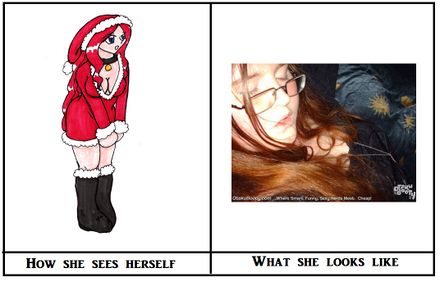 I am not sure at what age she started drawing the comic, but she was 21 when it started getting the wrong kind of attention (she is 25 at the moment). At one point, she got an obvious troll comment on one of her drawings and responded by raging at the troll, writing a journal about it, making a comic about it, reporting him, and then making another journal about getting him banned. Some time later, she was also discovered by 4chan's /v/ (I am not sure if the two events are connected) and was soon having her account flooded by trolls who gleefully reacted to her utter lack of talent, her attention seeking, her delusions of being sexy, her proclamations of being a "gamer girl" and, most of all, the fact she has the personality of a typical high school emo, despite having finished high school a long time ago.

At the moment, her DA page has roughly twenty-four pages worth of hateful comments that have all been deleted and all her other accounts are dead. If she is still active in any kind of internet community, she probably isn't using her old nickname anymore.

It has been about three to five years since her ragequit. Teresa no longer makes art or posts anything, although she still periodically logs into her old DA account every few months to delete hate comments that are still being regularly posted on it.

I started this review by saying that we have this wiki to teach people how not to make horrible webcomics, and there is something to be learned from "Gamer Chicks". But more than her terrible art style, you can learn from Suirenoki's moronic behavior.

The only thing about this webcomic that Teresa had done right was ending it.

UPDATE: Both her DeviantArt account and her other webcomic are both gone. Yay!