After sticking our hands into the rampaging mindscrew mess that is Concession and going through the endless ordeal of reviewing it, we hoped that at least there wouldn't be another webcomic as crazy and ridiculously plotted as that in the near future. We certainly don’t know the Internet very well, because right there, in Immelmann’s very domain name, lies a webcomic just as weird and convoluted as Concession. What are the fucking odds?!

Furthia High, by QuetzaDrake, is quite a peculiar case. Not only is the webcomic strange and stupid in many aspects, but we must also consider that this isn't the author’s first go at it. The current version hosted on Immy’s server is actually a reboot, committed at the end of 2007 to make the full transition from a semi-daily high school furry comic strip to the current, weekly long-page high school furry manga dramedy. It’s really hard to tell which of them is the worst, but I guess its enough to say that the new version isn't any better than the old one and actually sports a bunch of new mistakes. Also, its more like Concession now. That alone saddens me.

Neither incarnation manages to get off the ground.

Kale Williams is the only human in a world of furries. Why? Because---shut up! The situation was explained to some hilarious detail in the first version, but now the author has decided to leave it a complete mystery. What an improvement.

Anyway, Kale is terrified and intimidated by the new ambient before finding comfort among a trio of friends, who immediately save him and welcome him into their group through a series of... this. Then it is all happy times and random school hijinks. One day Kale meets Lupin, the hideously stereotypical bully. He's dragged into a fight with him (by his "friend" Ashley, no less), tries to act noble and gets his ass handed to him in a way so plain it makes you think he deserves it. He even becomes the Nerd Hero for it. They want tips from him! For what, getting their asses kicked? That's easy: make friends with Ashley.

We get our first pinch of drama at Bruce's birthday, where Kale falls down the stairs, causing strange mysterious dreams to emerge. Oooohhh, the wonder... Shit breaks down, everybody screams, and...they all forget about it. Its time for the Autumn Ball! Suddenly everybody thinks about who to take to the dance, except Bruce who is all wacky and instead wants to pull a damn Buckley on the whole school for not loving him. Also, Ashley's bitchiness reaches new heights as she badmouths and abuses everyone, especially the only loon to want to go to the ball with her and defend her honor against the dumb, emotionless bully. And what's his prize for that? Getting dumped with a smile. What a bitch.

Next comes two gay highschoolers openly dating each other! This story may take place in the near-distant future, but whatever social changes may take place, this scenario is not very likely to happen, as high school kids are not typically liberal-minded. (I know one member of a gay married couple who has said he never openly admitted his homosexuality until college.) Also, truth be told, even liberal-minded families are not necessarily accepting of their own offspring being homosexual. (I am uncertain whether this is meant to be wish fulfillment or sarcasm.) And we interrupt the main story to bring you...

...a long, convoluted dream sequence. One little problem, though. The arc starts with Kale and Eve on a parkbench, but all of a sudden the dream was supposed to have started at this point. (On top of that, it uses the heavily overused trope of such dream sequences starting with a car accident. Sigh.) Presumably the author doesn't try to go back and make corrections. Then we learn this about Kale. I could have sworn that the original idea of this story was that Kale was the last remaining human? And then Kale awakes from his coma...or not. And after all the drama about "truth", we come to this point. But ultimately a consensus is reached, and Kale finally awakens for real this time. However, others have gotten suspicious about what had been going on in Kale's head during his coma.

But with Kale temporarily indisposed, we're back to the high school hijinks. Gus hasn't ceased his pursuit of Ashley. And winter break arrives, and Campy is spending his time with his new boyfriend Connor, leaving poor Bruce all alone. On top of that, Bruce cannot even play his new game to distract himself. Ashley and Eve have their own sleepover. Then Ashley confesses her low opinion of Gus. Eve tries to defend him, but Ashley won't hear of it. (BTW, a former girlfriend of mine did reveal that during real-life sleepovers, girls do talk about boys behind their backs. The author at least got that right.) As for Campy and Connor, there are nonsexual recreations that they do together. But Campy does start feeling guilty about neglecting Bruce. And we get a little reminder that this is a futuristic world. But even in a future world, more traditional recreations haven't fallen by the wayside.

Kale is now back in the story, only to go through a new dream sequence, more ridiculous than last time. Kale has gotten a message, and when he figures it out, we get...another anticlimax. But never mind, it's time for more high school hijinks. (At least we see Lupin get his.) Also, I wonder if the author has ever read "Boston and Shaun"? No, it would be a crime to compare this webcomic to that! And now, Eve decides to get involved in Gus's pursuit of Ashley. (But then we hear no more about that part.) And Kale is not in some lame dream sequence this time. Whoops, I spoke too soon. And now we hear that what Kale was told in his previous dream sequences was disinformation? Did the author actually have any real long-term story line, or has he been just making things up as he goes along? (Very likely it's the latter.) And now the author makes things more confusing than ever. Or maybe it's just the simplest explanation: Kale is just crazy. (Well, imagine what it must be like to be a human in a furry world.) And Kale's friends' response to his predicament? You'd think they'd show a little more sympathy. But what does it matter, let's just go back again to the high school hijinks.

And finally, things get a little surprising. Would you believe that Bruce is so passionate about food that he will even stand up to the fearsome Lupin over it? And we finally find out about Lupin's background? And even better, Bruce is developing a backbone, to the point where he earns some respect from Lupin? Bruce is even able to distract Gus away from thoughts of Ashley! And one cooking competition later, Lupin finally confesses to Bruce that Kale had made him feel afraid during the fight scene earlier in the story. Ha!

Now comes a major class assignment which forms the core of the next story arc. Kale has made it back to class now, and has a laugh at the expense of his supposed friends. But Kale ends up sharing the laughs with everyone else at the school, and...OMG! The comic actually mocks "Concession"!

So now Campy and Kale are working together on their new assignment. But before any schoolwork is started, there are relationship issues to be discussed. And the discussion takes a very unexpected turn! But no, the whole thing turns out to be a dream. (At least characters other than Kale have dreams as well.) Except that this time, the dream threatens to repeat itself in reality. And can Connor get Bruce to actually work on the school assignment with him? But no, they end up fighting over Campy, who finally intervenes. And now Campy confesses his irritation with the two of them. Though Campy's punishment is rather much. Why not a handshake instead? Probably the author needed a pretext to show yet another picture of two males mouth-kissing each other, as he has figured out that his readership wants as much male yaoi kissing as he can possibly squeeze in. (I would have figured out the same after viewing the fan art pictures.)

The story continues, but I've made my point by now. The webcomic is erratic, abruptly jumping between story arcs, and the question of Kale and why he is human is supposedly dealt with, but three dream sequences have failed to give us any idea whatsoever. The humor and characters are sitcom-level, and if the author had simply stuck with the sitcom humor, he might have made a more entertaining webcomic.

UPDATE: Shockingly enough, the author really did resume his webcomic after a two-year hiatus. Unfortunately it updates so slowly and randomly one gets the impression that his heart is not really in it anymore.

The original incarnation art style was pretty crude line drawing with erratic proportions and no shading. At least it was in color, undoubtedly a necessity just to get people to look at it. 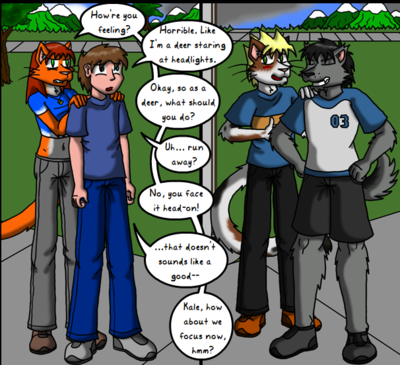 The later incarnation art style is more refined, with better proportions, detailing, coloring, and shading. Also the furry characters now wear shoes. The artwork is still rather crude at first, but as the webcomic proceeds the art does get slowly but surely much better.

What can one say about a narrative that keeps jumping back and forth between high school hijinks and what goes on inside Kale's head? Kale being a human in a scenario where all other humans have become furries generations ago is the story's big mystery, yet the dream sequences which are supposed to clue us in about Kale and his origins don't tell us a damn thing. And it seems very unlikely that the world's only human would be allowed to mingle in society, and not be feared and shunned as a leper. And ignoring Kale, the story is a glorified sitcom with lots of yaoi male mouth kissing and society being far more accepting of homosexuality than any society, no matter how progressive, would actually be. Yet the webcomic carries the message at the top that "Furthia High won the Ursa Major Award for Best Graphic Story of 2011!" No lie (see below). Well, at least there are some genuine laughs in this webcomic, so that's something.

I found nothing besides the links already provided.

Originally the webcomic was simply a furry scenario with a human thrown in as a gimmick. Every human except for Kale has already been converted to some furry form, yet somehow Kale is simply wandering among the rest of society. (Like the world's last human wouldn't far more likely be quarantined in some laboratory?) Then in the revised version, Kale was evidently a furry/human hybrid like everyone else, but he had somehow lost his furriness. (Even then, would he really be allowed to be wandering around in regular society?) I was anticipating that this webcomic was meant to be some sort of satire, but it isn't. It vacillates from high school comedy to romance to "deep meaning" and whatnot. The author could have done better if he had stuck to light comedy; at least he has some talent with that. 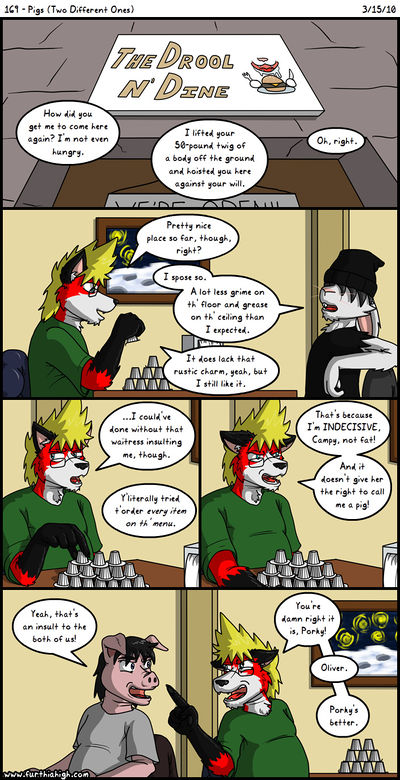 You never mess with Bruce when it comes to the matter of food!