I don't remember how I found it, but there are plenty of ads for this webcomic around.

This is an example of a webcomic that started out poorly only to get much better, both in art and in writing.

Colin is an anthropomorphic red fox (not to be confused with the one in ClosetCoon) who is promoted to become a district manager for a grocery store chain. The bad news is, the job requires Colin and his kits to abruptly relocate to another town. Arriving there, Colin manages to find an apartment and a new school for Tanya, who, once there, aggressively tries to make new friends. Tanya can also be aggressive in other ways, but in one case she proved to be aggressive with the wrong cub. Kaleb, a rabbit, intervenes and the fight turns ugly. Another student brings in an adult, but Kaleb has already been seriously injured. Kaleb's mother Flora is contacted, and she finds her son in a coma at the hospital. Her reaction is to pray to "the masters" for her son's recovery. Meanwhile, Tanya is upset over her day at school, and Maricio, who had brought the adult to rescue Tanya, is also upset-and afraid. Back to Flora, she now has trouble with an asshole boss. But then she is contacted by Colin, who has praise for Kaleb, and they all later meet at the hospital after Kaleb is wakened. Tanya tells off Kaleb when they are alone together, but after hearing Kaleb's side of the story, relents. Colin and Flora, also alone together, talk about childhood romance. It also turns out that Kaleb has complications from his head injury. Flora explains things to her asshole boss, who is forced to accommodate her needs.

Even then, Flora still has plenty of problems, such as therapy for Kaleb, and the fact that Kaleb is not enjoying Tanya's company. Flora also has financial problems to deal with. The kids are back at school, and there is Benni, the bully from earlier, to worry about when he gets back. But now Flora loses her job after all. And we learn Colin is a widower. Meanwhile Colin is at a special business conference, and despite this inconvenience, he is lucky to have employment, unlike Flora. And whither Benni? Not only is he not home, but like Kaleb, he also received an injury. Hunter has found him, to his displeasure, and now Tanya and Kaleb have found the two of them. Tanya confronts Benni, who confesses that he has run away from home. Flora, finding Hunter gone, has brought the police into the situation, and soon everyone is found. She brings everyone back to her house, including Benni. Surprise, surprise, Benni actually has a set of moral standards! Anyway, someone from Social Services visits Flora, and Benni is taken back to his father...but he doesn't want to go. Perhaps this is the reason why? Fortunately, the people at Social Services are not without suspicions about Benni's situation.

Colin comes back, and retrieves his kits. Afterward, Kaleb tells his mother about what Benni had done to him. But that was far less horrible than what happens to Benni.

At this point you might ask, "How is this an 'animal story' when everything that has happened so far could have been done with a human cast?" Well, now we come to the subject of...

Their religion, where they worship the now-vanished human race. (And in a previous strip, it showed the different monetary system they use.) And this society also has specific rules regarding species.

In any case, Benni again has run away from home. Flora brings Benni to her own home-and then discovers Benni's dark secret. Flora brings Benni back to Social Services, and eventually, Benni's father winds up in jail. Unfortunately, there would be others besides Benni who have faced such horrors...

There is more, but I covered enough to give the overall basic story, and left out several subplots. Despite the talking animals, this is not a cutesy, happy story, but one dealing with issues such as poverty, fighting, bullies, sexual abuse, and such without being exploitative, or being maudlin a la Jack.

It was rather crude, stiff, and poorly-proportioned at first, to the point where some people told the author not to bother continuing. But he went ahead with it anyway, and his artwork certainly got better with practice: 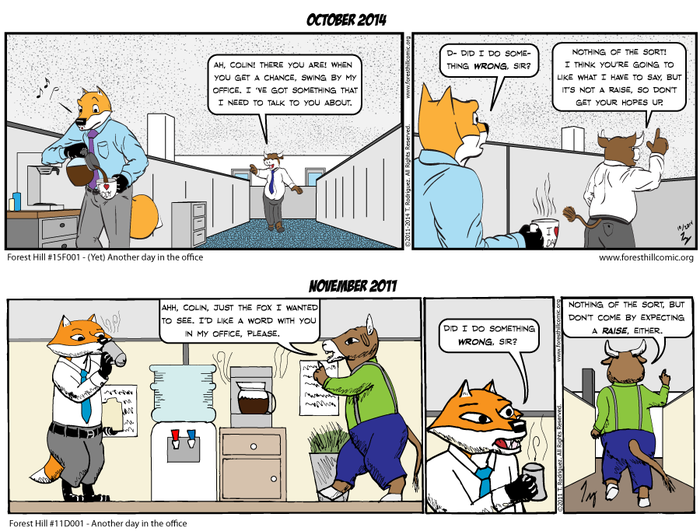 The author himself illustrates how his artwork changed over three years.

The artwork becomes more refined and characters more integrated into the backgrounds as the webcomic continues, and the characters are less stiff and slightly more humanlike in proportion, but still definitely animal-like. The author has pet rabbits, and of all the animal characters, the rabbits look the best and even have (unlike most cartoon rabbits) proper rabbit heads and features. Everyone goes barefoot, but at least the characters' feet are animal-like (hooves for cattle and sheep, digitigrade for the foxes and cats, long feet for the rabbits, etc.) Surprisingly though, the characters' clothing is humanlike. Also of note is that though women have bosoms, neither gender has humanlike hair.

Though the characters are talking animals, they are relatively realistic rather than cartoonish. You won't see exaggerated gestures such as bulging eyes or jaws dropping to the floor. The webcomic, after all, is meant to be dramatic rather than humorous.

Color appears in some strips but not others, presumably due to the time factor, for in strip #318, the author announced that due to time pressures in his daily life, he had to stop using color and resort to monochrome art in his webcomic to be able to continue it on a regular basis. Suitable enough for the nature of the story:

Campion, the author of this webcomic, is also a member of the BWW, and has admitted that he originally intended that Forest Hill was going to be a conventional story about an anthro fox who is forced by his employer to abruptly relocate as part of his job, and who has to bring his reluctant children along as well, and the trouble everybody would have in this new environment. The part about the children being sexually abused was actually brought in later as an afterthought, though that element would prove popular with his audience, some of who had to deal with victimized children, and others who have themselves suffered such abuse.

Of course, why have this sort of thing happening in a specific "animal world" with its own social rules, monetary system, and religion of worshipping long-lost humanity? And the answer is, why not? There is no reason to assume that a world of talking animals would be any more benign than one with humans. After all, the story Watership Down is about a society of non-anthropomorphic rabbits, and it is unpleasant and violent as well.

Those of you who see this review might think of another webcomic using furries but meant to be taken seriously-namely Jack.

But the two have only that in common. Jack has the supernatural world as its theme; its title character is a Grim Reaper-type being and there are angels and demons, and Heaven and Hell. As described above, the animal characters of Forest Hill also practice a religion-but that centers on the now-absent human race. Like in Vicki Fox, everything is terrestrial. You don't see supernatural beings or places (and presumably never will) in this story.

Also unlike Forest Hill, which is specifically a world of anthropomorphic animals with its respective rules, Jack uses furries because, as author David Hopkins himself admits, furries are more expressive. In other words, Jack could just as well have used a human cast instead of cartoon animals. And while the art of Forest Hill was originally poor, it did get much better, and it certainly never had the weird buggy eyes and squishy noses and big, badly-drawn hands and wonky anatomy of Jack's furry characters. The art of Forest Hill, once it improved enough, became suitable for a depiction of a realistic scenario involving serious situations. The art of Jack, as that review points out, would be well suited for a silly slapstick comedy, but is instead used unironically in a maudlin, depressive, violent, and gruesome supernatural horror webcomic which is meant to be deep and meaningful but is instead unintentionally silly.

As for storylines, one of the first story arcs in Jack has a disgruntled student enter his school and shoot a bunch of people in it, then Jack captures him and sends him to Hell to be tormented. Subsequent story lines deal with supernatural topics, morality, and so forth, while Forest Hill has an overall storyline rather than a series of story arcs, and when it eventually covers the topic of child sexual abuse, there is no divine intervention of any sort. The police and social services have to be called in to deal with these matters conventionally, and the problems for everyone involved won't be resolved overnight. And as for the religion the animal characters follow in this scenario, we have only a few clues as to how they relate to and deal with "the masters".

Nothing besides the links already provided, but the author is a member of the BWW forum.

Forest Hill is a webcomic about a world of anthropomorphic animals which is meant to be taken seriously-and it succeeds. Partly because of its non-toony appearance, partly because it is a developed anthropomorphic animal world with specific social rules and a history and a reason for existence (they evolved after the humans have left, we assume), partly for the story not being sweetness and light but not being maudlin either.

The webcomic does have furry clichés such as bare feet and human-style clothing, and why have human names in a world (presumably) far into the future? But as a furry world that isn't simply a mirror of the human one, it does the job.