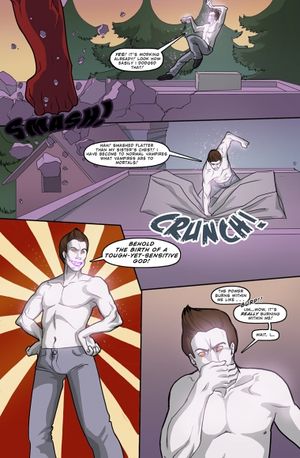 If there’s one thing I like, it’s challenging thought. This extends to my humor somewhat (i.e.: I find jokes like “The number you have called is imaginary, please rotate your phone 90 degrees and try again” and “Let epsilon be less than zero" never get old) which is why I find most ‘comedy’ webcomics rather lacking. However, I sometimes suffer from minor brain hemorrhages that cause my sense of humor to degrade to the point that I find someone braining themselves funny (the reason why I keep buying Darwin Awards books). It was in one of these periods that I found Fafnir the Dragon.

The comic never really fell to the abyss for the likes of Applegeeks or Bleedman’s comics, but sadly it never pulled itself up to the pantheon of what I consider as classics such as Gunnerkrigg Court or Unsounded.

Who’s familiar with the legend of Fafnir? Fafnir is actually a wizard who donned a magic helmet that turned him into a dragon with godlike power so he could guard his hoard of gold at the cost of his intelligence (I assume anyway). Unfortunately for him this happened when magic (the only thing that could hurt Fafnir’s dragon form) was ubiquitous, so he was defeated and his treasure was taken away. Fast-forward to present day, Fafnir’s hoard has been melted and cast into other things. However, the magic in them still remains and anyone who can get their hands on a piece of his hoard will have the power to command Fafnir for nine days and nights. The plot of the comic is divided into separate storylines, with only Fafnir and occasionally Jon Stewart as the connecting threads.

The first storyline starts in a post-apocalyptic future populated by mutants where Jon Stewart (yes, that Jon Stewart) obtains a coin that was cast from Fafnir’s treasure. He calls upon Fafnir to bring President Obama into the future to save him from his assassination that started the mutant apocalypse. After this the two kill Limbaugh and Cheney in the future, they travel back in time to send a note warning Michelle Obama about the assassination (Why?! Can’t you just send Fafnir to prevent the assassination by killing Rush Limbaugh and Cheney? And if that's not an option, just prevent Limbaugh's and Cheney’s parents from meeting!)

The second storyline is about the annihilation of Twilight vampires by the original vampire, Vlad the Impaler. It also features a cast of vampires from different mythologies, such as Nosferatu and Aswang, who was portrayed as ugly, but competent compared to the ineffectual pretty-abominations—the sparklepire. Edward Cullen—sorry, Catherer— who then hatched a plan to increase his power by drinking Fafnir’s blood. Anyone familiar with the legend of Siegfried should know that you’re supposed to bathe with it. This mistake turns him into a living (undead?) torch and in his panic, he blunders into a chainsaw juggling competition (okay, if you haven’t thrown logic out of the window by now, do it). He waded into the pool of Thor (which apparently has the same property as holy water) and finally gets stabbed and pissed on by Vlad. The aftermath shows the world after the annihilation of the sparklepire and A.R.I.E.L killing Stephanie Meyer terminator-style. Also, the 'King' makes an appearance at the end. I assume the comic refers to Stephen King but fuck, I don't recognize him.

The third storyline focus on Atomica, a super-heroine that fought Fafnir in the published storyline titled 'American Idolatry' (which I didn't read, but I assume she lost since her power isn't magic so it can’t hurt Fafnir) and an environmentalist battling Japanese whalers with the help of Fafnir. (Not complete yet)

Let me get one thing straight first: while I would like to think myself as someone capable of critically reviewing art, I’m more lenient than most people. Since I draw (not paint, because shit oozes off my finger every time I do) myself, I’m happy for any artist that puts in the effort to get a good grasp over anatomy and perspective because I know how hard it is to get these things right, and I'm usually less inclined to slam people who obviously put effort to their work. Basically, I judge people’s art by five criteria: anatomy, perspective, color, the uniqueness of character design, and effort.

On first glance, Asta Gunn’s art is extremely pretty and skilfully rendered, which is not surprising since it would appear that Gunn is a professional illustrator and she obviously poured some effort in rendering the pages. While anatomy can come off weak at times—especially on the character ‘Atomica’—Gunn’s adept at drawing a variety of body types. She easily renders a morbidly obese Stephanie Meyer (if you don’t have Class-A Amnesia, DON’T click that link) to the fanservice-y bod of Vlad the Impaler without marginalizing perspective. Her use of color to set tone, mood and atmosphere of each storyline is also pleasing in a way that I should probably tell my psychiatrist about.

Her anatomy started to fail when dealing with female characters, especially ones with extraneous ‘assets’ like the character Atomica. While one can argue that this is a stylistic choice, it doesn't make sense because her male characters have semi-realistic proportions. Thankfully, Gunn makes a point to give each character a distinct silhouette—except for generic characters like soon-to-be-eviscerated-vampire #1 or innocent-civilian #4—which make the characters immediately distinguishable from each other. On the other hand, Gunn failed to achieve what she has to do when making a comic about real-life characters. Here’s one example: 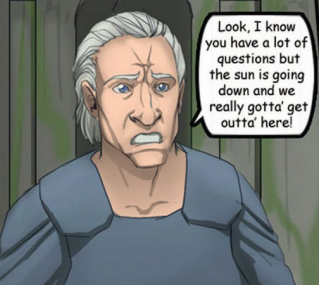 That’s Jon Stewart. Jon motherfucking Stewart! GODDAMMIT GUNN! I recognize him straight away when I’m reading Fake News Rumble, which has inferior art to yours! Why can’t you do the same? Your partner has to resort to name dropping to make the reader recognize him. If that is happening, you should go to your room and take a good hard look at what are you doing with your life.

At least Gunn managed to squeeze out expression out of Fafnir, which is no mean feat because he has a realistic reptilian face. If you ever see a real lizard emote the way Fafnir does, then I’ll bend over and eat my own ass.

Ahh… this is where Fafnir the Dragon starts to shit itself. In short, each storyline has absolutely no connection to the others aside from Fafnir and Jon Stewart. However, this doesn't really get to me because Skald knew the importance of a clear goal. Like the chocolate around a licorice bullet, a clear goal makes the whole thing bearable because it binds the actions and gore together. But it's still a licorice bullet, so you can't deny that it's shit once the chocolate is gone. Skald tries so hard to provide commentary to the subject he's attacking, but he has failed to do so because he provides no balance. You know why John Stewart's The Daily Show is so funny and successful? It's because he's fair! He doesn't just attack Republicans, he also attacks the Democrats and even himself so he doesn't come across as an arrogant cunt. Also, you don't portray the reactions of your characters realistically, and it's bloody stupid at times. For example: why the fuck does a grandma that just saw several people being turned into jam not react by screaming her tits off?

The comic also has a crippling addiction to bashing figures Skald doesn’t like and over-reliance on the shock value of gore. I could tolerate the former because honestly, only people that stuff fireworks and bleach up their nose like Rush Limbaugh and Stephanie Meyer. However, the shock-and-gore just gets really boring after a while. That’s just the thing about gore: once you repeat it more than 3 times in a single chapter, it falls somewhere between Jack-in-A-Box and your cat leaping into your lap while playing F.3.A.R in the global shock economy. If you don't like someone you don't have to imagine turning them into kidney-and-steak jam, Skald. There are fates worse than death, you know.

On the other hand, Skald wrote Fafnir into a very interesting plot device. The reader can make a guess as to his motivations and he comes across as devoutly trying to achieve that goal—except when there’s hot wings involved—by doing the bidding of the main character of each story line. Fafnir might be god-like but his weakness—limited intelligence, vulnerability to magic, and hot wings—sometimes play a part in the story, which saves him from taking the wrong turn on Mary-Sue junction; though it was not played as often as I liked. But! Because his motivation doesn't get played out, he becomes a mere tool for the author to kill every one and move the plot along, which is sad because Fafnir is probably the most interesting thing in this comic. Meanwhile, the characters of each storyline tend to suffer from Mary Sue-ism or just being an unlikable fuck-bin (Atomica is particularly guilty of this). The characters are also hit with the flanderization hammer so hard that most of them are flatter than paper. In fact, the best character is the fat emo girl who got turned into a mosquito-faced vampire and I felt bad when Edward screwed over her chance for glory. When the God-like dragon you use as a plot device and a mosquito-faced vampire are more interesting than the human or humanoid characters, something has definitely gone wrong somewhere. Stop doing the straw man politic thing then we'll talk, Skald. 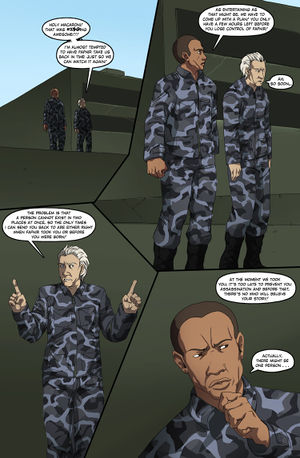 Is that Barack Obama?...

I couldn't find anything substantial about Skald or Gunn so I’m just summarizing what I found in the bio on Fafnir the Dragon website.

Skald claims to be a poet from the Viking era that got frozen during his journey with Leif Erikson and was thawed recently by global warming. Because the poet can’t draw, he is the writer.

Gunn on the other hand, is like a female and grosser version of Mowgli and Tarzan that practices cave painting. Since wild child lacks the literary ability to create even a semblance of plot, she is assigned the role of illustrator.

Well, the good ship USS Fafnir the Dragon could see the Good Webcomic port, but its insistence on random straw man political commentary and childish gore steers it into the Mediocre peninsula. It's not as bad as Diversity Lane or other political comics, but these two factors put a dog-shit bullet right between Fafnir the Dragon's eyes. Like a Dan Brown bestseller, this comic isn't something one should check up on frequently if you value your IQ points.

You know what though, Skald? If you make a spin-off that focuses on Fafnir and Fafnir only so you can focus on his character and history, I'll throw myself at your feet and give you enough money to pay a stripper for every emo teenager in the world. As it stands, Fafnir the Dragon is a mediocre bash-comic that makes me feel guilty for reading it.

Now excuse me, I'm going to read Gunnerkrigg Court and WAITT before the part of my brain responsible for higher reasoning turns black and falls off.