It was brought up on the BWW forum. Just reading a little bit convinced me this was review-worthy, but what really has provided the incentive for me to write this is how the author goes out of his way to say how wonderful his miserable little webcomic is. (I am reminded of how, in a magazine article I read years ago, John Cleese had talked about how funny his then-upcoming movie Fierce Creatures would be, and it turned out to be a critical and financial failure. I saw it myself and disliked it. Later on, Cleese would admit that he regretted making that movie.)

Not applicable, as this is a gag-a-day webcomic with no overall story line.

Crude and stiff line drawings with flat colors and no shading. There are very rarely backgrounds, and few props except as needed for whatever gag is presented.

A strip might consist of a single picture or alternatively a panel with a variable number of dividing lines, depending on the nature of the gag. 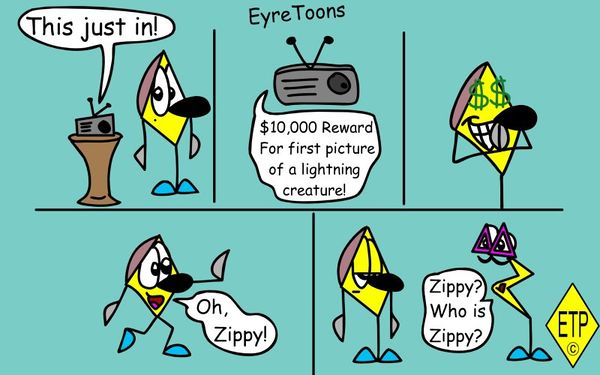 The author explains in text under the picture that Zippy dislikes having his picture taken. Problem: the reader should get the joke just by seeing the picture without requiring further explanation.

The animal characters look even worse: 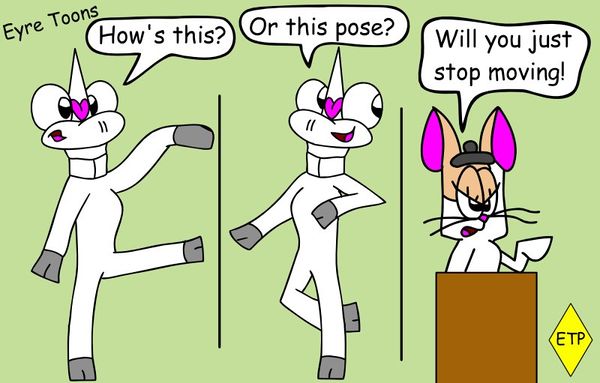 Holy Boston and Shaun! Another comic with an extremely weak punchline!

In my other reviews, I did admit that bad art could possibly work for a humorous webcomic. So this means that the crude artwork style I mentioned should be suitable enough for this webcomic, right? The newspaper comic Mutts is rather crudely-drawn too, yet it works very well: 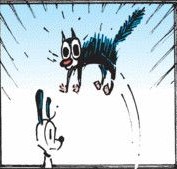 A panel from the Mutts newspaper comic.

Except that the Mutts drawing has one characteristic that Eyre Toons doesn't have-namely, animation. The picture of Mooch and Earl of Mutts has a sense of life and motion which is absent from the stiff drawings of the characters of Eyre Toons shown above.

It should be noted that the author actually has created animated videos of his cartoon characters (links below). Too bad this same author is unable to place a sense of animation in his static drawings as well. If he had done so, this webcomic could more legitimately claim to have been inspired by cartoons from the golden age of animation, rather than be the poor emulation that it actually is.

Every page has this header on it:

"Meet the funny, crazy Eyre Toon characters. (Inspired by the cartoons from the golden age of animation, like Bugs Bunny and Mickey Mouse). Join Diaman, Emmy Cat, Whitey The Unicorn, Double D The Spider and more in as they make jokes and poke fun at every day life with a few wild adventures thrown in from time to time! "

Talk about tooting your own horn, eh? But Eyre Toon Productions doesn't stop there. They even created Facebook pages for the characters listed in the above quote:

Diaman: A yellow diamond-shaped character with eyes, ears, nose, mouth, hands and legs. He says on his Facebook page that he is the official mascot of ETP.

Whitey The Unicorn: An anthropomorphic white female unicorn with a purple heart-shaped mark between her eyes. Unfortunately the most horribly-drawn unicorn I have ever seen!

Double D The Spider: A non-anthropomorphic spider, though with human-like eyes.

One surprisingly unlisted character is Zippy, a lightning bolt-shaped character with just eyes, a mouth, and legs, since he tends to appear rather frequently.

So what kind of jokes does this webcomic have? Here is an example, obviously copied from Wile E. Coyote and Roadrunner cartoons:

This sort of joke doesn't work too well in a static drawing.

The author reuses this particular joke multiple times. Perhaps the joke might work as part of a build-up in a tense situation, but by itself it isn't really that funny.

Other running jokes include numerous instances of Diaman jumping out from behind a rock (and presumably not getting the reactions he wanted), Double D the spider scaring everybody, even himself, Mousey getting into numerous ridiculous situations, often involving food, Diaman playing psychologist to a stick figure, Emmy Cat having ridiculous friends, and a weird bird character named I-Dunno, the running joke being his weird name and how it confuses people.

A few of the above-listed jokes are at best mildly amusing, and in better hands might have been much funnier. But there are other strips that are just plain stupid, and ones that make no sense at all, and ones with extremely weak punchlines a la Boston and Shaun that make the reader wonder "Where's the gag?", and just plain jokeless strips.

It should be noted that the author actually put up several strips since I started writing this review several days ago. Note to the author: Quantity is no substitute for quality. Instead of dumping tons of strips into your website, try actually putting some thought into your gags to see if they are genuinely funny, then putting them up if they actually work.

I can find nothing besides the links provided.

This webcomic reminds me of the also-reviewed Elwood, a webcomic that should have been good, but wasn't-and that webcomic at least had much better artwork.

What these two webcomics have in common is that they both spring for broad, general audience-type humor, and both their creators have done animated cartoons. Unfortunately both webcomics also feature unlikable characters and unfunny jokes. Mark Haldane of Elwood finally got the idea and ceased his webcomic; the author of this one is just wasting his time too. This webcomic doesn't even seem to have much of an audience, judging from the very rare comments.

If you want "golden age of animation"-type comedy, just watch the original animated cartoons instead.

UPDATE: This author decided to cease his webcomic as well, though he has promised to do other ones involving his characters. He has kept his promise, but you'll need to click on the link to his DeviantArt page. 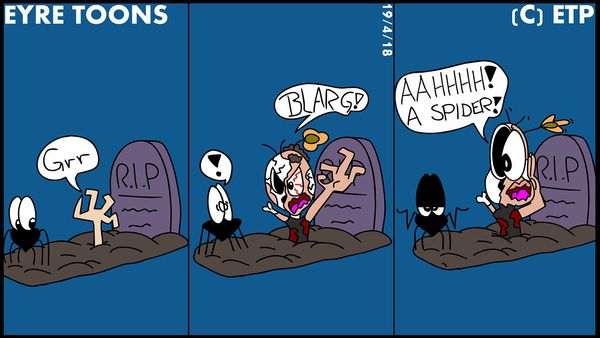 For once, Haydn Eyre comes up with a cartoon that is genuinely funny.

SECOND UPDATE: Smackjeeves has been shut down, so this webcomic is gone as well. The author's Facebook pages and video and DeviantArt sites still exist, but none of them have shown any signs of recent activity.