As has happened before, a webcomic gets mentioned on the forum for being bad but then we forget about it, then we come across it again almost a year later and go "Hold it, isn't there a review of this? No? Ok, let's get cracking!"

The first two pages of the webcomic encapsulates quite perfectly what could have made it great - and what made it shit. See plot and writing section for details.

Ok, y'all remember Least I Could Do - the comic about a manchild Mary Sue douche who constantly somehow gets laid, then 'grows up' to become a married manchild douche Mary Sue who is unlimitedly wealthy, and still gets away with insane shit because lol-rich and lol-random gags.

This webcomic is... more or less that, just with a female main character. The two first pages sets it up perfectly: A random pink-haired game-dev woman makes a monstergirl-fucking game earning endless amounts of money - and suddenly doesn't know what to do.

Now, if this were a good webcomic, it could delve into the modern challenges of the newly rich - how friends become leeches, how hollow and fake the "rich community" is, how difficult it is finding anyone to truly have a friendship with... let alone a romantic relationship with - people around her just want her money and whatnot.

Of course, if this webcomic were good - I wouldn't be writing this review. No, instead the comic shows the pink-haired main character Izzy Pritchard start spending her money to do insane shit like dumping buckets of whale-cum off an urban high-rise down onto random passers-by.

Basically, this webcomic almost instantly turns into "Garry's mod but in reality, because endless money" - be it covering the offices of Time Magazine in feces to unleashing hyenas on people and having the hyena eat them alive. Basically, lol-random gag-a-day shit of the most crass sort. And I mean really fucking crass. Honestly, not even Least I Could Do went as low as having the main character offer random people money for sex. It's pretty much all just sex, drugs, alcohol, gross-out jokes with copious amounts of animal jizz and other infantile shit that makes less and less sense. It'll show some blood, but not gore, and all naughty naked shit gets pixelated (but you can get the full on nsfw shit on the artist's Patreon).

Early on in the webcomic it seemed almost self-aware of how fucked up it was, but even years later it still stuck to the "lol-random rich druggie woman with big tits doing stupid shit and not giving a damn" schtick. How about getting to a food fight with a moon-shaped-faced pizza pocket hustler?. Random shit that makes no sense, and in no way encourages the reader to give a fuck.

So ya... basically, early on the writing was fairly spot on for a gag-a-day comic about a newly rich idiot doing lol-random shit, but later on... it's just weird faces and weird non-sensical gags that aren't even funny. It's like pointing and laughing at a spastic retard that keeps falling over, yet looking up each time smiling like a champ. It's hard not to crack a smile at it, but its mostly out of pity.

Character growth is replaced by introducing the occasional new character, with older ones quickly being forgotten if the cartoonist wants to go off on a new strange and likely drug-fueled tangent. The characters do not care for each other, they care more about drugs than reality, it's apparently ok to make fun of people with crippling phobias, nor does the comic care for making sense. To this end, none of the characters are likable, nor relatable. It's assholes doing asshole bullshit.

Now, see that last comic page linked? Do you think that the green-haired joker is some kind of nemesis? That the next couple of pages will be a bareknuckle fist/food fight? Nope - it's gag-a-day bullshit, so its completely forgotten on the next page, which has nothing to do with the previous one. The comic is incredibly whiplashy in tone that way around, going from drug-humor to really lame sex jokes, to friends walking on the beach chatting all nicely. There is no singular tone to the comic!

...because after that "pasketti" page, there is legit a six page mini-arc about two girl hanging out in a mall... with some kind of eldritch insane older sister terrorizing them? wut? This comic, it is on crazy pills, and that's not really a good thing. But you see, apparently the whole mall sequence is a flashback that adds nothing to the comic of consequence, only we're never told its a flashback, but you're supposed to be on three different kinds of acid, DMT and buttplugs to understand the transcendent madness of this comic. Brilliant.

A good way to understand the bad writing and inconsistent plot was suggested by a BWW forumite: Compare Ennui Go a comic like Stonetoss which is well known, and by SJWs reviled, for being supremely edgy and politically incorrect. This comic is NOT edgy. Oh sure, it has gross-out humor, jokes about alcoholism and drugs, random eldritch weirdness - but its never edgy. It never makes any truly edgy points or statements, and very little if any of the hijinks, murders, assaults, or anything else have any kind of permanent effect on the comic.

Of course, most of the fans of the comic are probably just there for the nudity and sex jokes - and if they want the real smut, they'll be among the 200 idiots paying patreon money to see the uncensored nudity.

It doesn't help that about halfway through the comic it apparently completely changes focus to chiefly be about the red-headed Max, who is Izzy the rich idiot's younger cousin... problem is that the comic doens't change title or really inform you about this - it just comes off ass a another lengthy random plot-detour, with fish-girl princesses and randomly assaulting people because apparently even Izzy's cousin exists in a magical world where police, witnesses and logic doesn't exist.

As noted earlier, then initially the art style of the comic was simple, but it fit the gag-a-day theme. You weren't in doubt what kind of expressions were on show, and it worked well for the visual gags and gross-out humor. It's also clear that the artist knows their way around lighting and shadows, making for quite visually pleasing artwork. 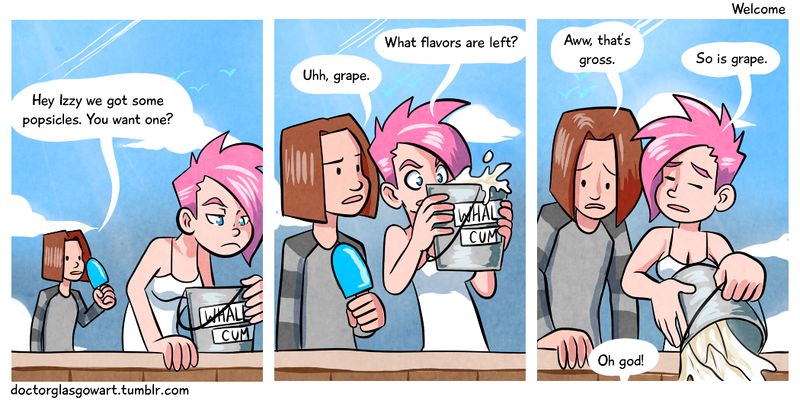 This is sort of funny, at least for the first few times this kind of gag is used]

However, later the art gets a lot more complex and artsy, with shit like this: 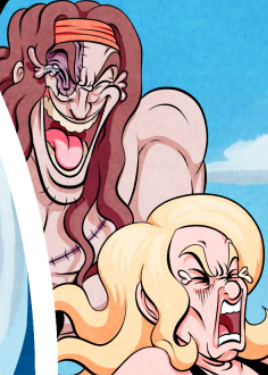 Surprise butt-sex?, nope not even in the least...]

It is, to put it mildly, rather jarring when faces like that start getting tossed around - but I guess the artist thinks they're funny? Basically, as the complexity and level of detail increased, it started to serve the visual gags less and less. Sure, actually seeing all the beer bottles that the alcoholic rich idiot has gathered up fits with the 'story', but... it just feels as if what little energy there used to have been spent on the writing started to go entirely into the artwork.

I mean, shit like this looks really nice - it does - but... a few pages after that the rich idiot has bought her own private island nation or lame no-effort gags like this which feel like they were written like a five year old, but illustrated by a professional artist. And unlike Axe-Cop, it's neither funny or good, when its just random crap about what hotdogs may or may not be made out of.

Another issue that the art has, especially once the art got "better" was that the faces started to go from 0 to 100 in intensity at the drop of a fucking hat. Sure, one of the characters (the cap-wearing artist guy) has a running gag about always being tired, but spilling ink on yourself and looking as if he's screaming about his nuts having been shotgun'd... it just doesn't fit. Basically as time goes on in the comic shit gets more and more exaggerated, often way beyond what the visual gags can explain away. Hell, sometimes these really weird tonal shifts are the foundations for the page gags... which in the opinion of this review is more often miss than hit.

No clue who Doctorglasgow is. Don't really care. The joker's online art gallery page (see the Links section) demonstrates that we're actually dealing with a competent artist - so how the fuck lunacy like this gets made... no clue.

Usually I would put a webcomic on blast really hard, if I can see wasted talent. Doctoglasgow is without a doubt a talented artist - but... as a comic writer? At least the writing in Least I Could Do is fairly consistent theme-wise. In this webcomic it is amazingly random, makes no fucking sense, and from one page to the other you might be mistaken to think that you're reading an entirely different comic.

Basically, this webcomic fails as a gag-a-day comic because the jokes miss far more often than they hit, especially once the art starts getting weird, which causes the visual gags and puns to go out the window. The writing.... the writing was never good, and it arguably only got worse. This is the kind of webcomic where you're not really sure if the cartoonist is regularly on drugs, or just mildly insane.

At the time of this writing, the Patreon for the comic had 199 patrons - most of which are likely at the 5$ range, where you get access to the uncensored comics. That's about a grand a month for cranking out insane bullshit. Fucking magical.