Elwood was in the to-be-reviewed section of the BWW forum. Easy to see why.

Not applicable, as it is a series of gags with occasional story arcs.

Simplified toony drawings, mostly in black-and-white but sometimes in color, with minimal backgrounds and detailing and little to no shading. The style has stayed the same throughout the webcomic's run.

Unfortunately the site doesn't allow direct links to individual strips, so I must post copies of them here:

The first strip. Unfortunately, the jokes don't get much better.

The scenario is as follows. Elwood and Meche are two dogs who are the pets of a faceless man they refer to as "The Master" or "The Chief":

I guess the animals can talk to each other but not to humans.

And like many cartoon characters, Elwood has a shoulder-angel and a shoulder-devil, but unique to him, he has a sort of intermediate character as well:

But evidently, none of them are aware that chocolate is toxic to dogs.

But wait, there's more! In one strip, Elwood befriends a wild fox whom he catches digging through some garbage:

Said fox has a brother:

Well, for Garfield the cat, Mondays always go wrong for him.

Other characters include a duck named Elle:

Probably the least likable character in this story.

And a second duck named Ruffy:

And probably the least intelligent character in this story.

As indicated by the strips shown, the comic is mostly gags:

A rare strip that is actually funny.

Well, there is at least one storyline strip, about a war between cats and dogs:

How the war starts. 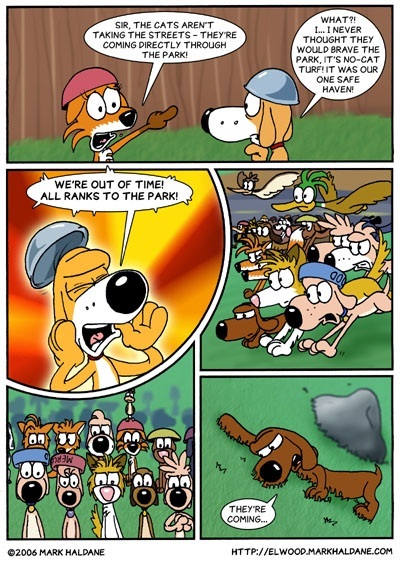 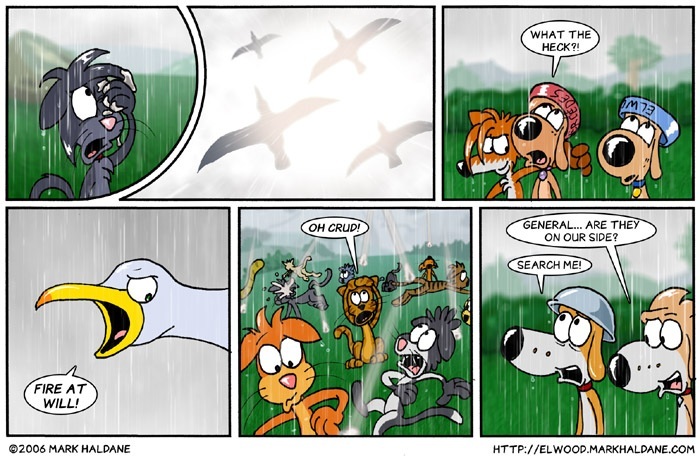 Talk about an anticlimax.

Well, so ends the war.

Some might claim that the above storyline is a satire on the then-current wars in Afghanistan and Iraq; I prefer to believe that it was simply a failed attempt at silly humor.

Elwood isn't offensively bad, but it isn't good either. The characters are hardly likable and the jokes are hit-and-(mostly) miss. Certainly a webcomic about house pets and the animals and people around them has a great potential for humor and charm, but this webcomic is surprisingly lacking in either. It is telling that the author originally updated this webcomic regularly, but slacked off toward the end-which is the case with many webcomics that wind up being listed here.