Not rating this comic. It wouldn't matter anyway, and there are too many zero star reviews on this site as it is. 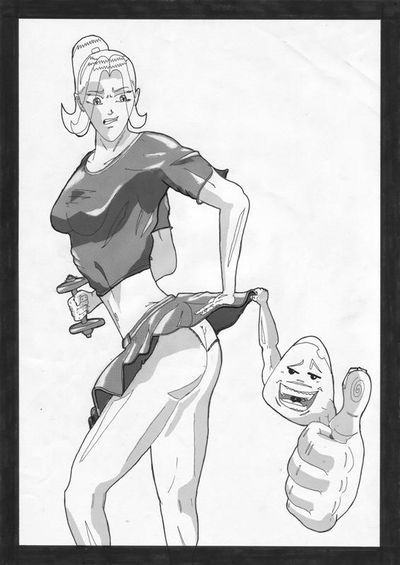 The cover page tells you all you need to know.

The best kind of bad webcomic is a short bad webcomic. Or not. Ivan Henley's World was five stories wide, a masterpiece of pure amazing unbelievable length stretching across at least a hundred pages of… erm, content, and yet somehow I managed to find it entertaining. The biggest reason was getting to write out my review at the end, of course, but for some comics it's just amazing to see how much stuff somebody will put up, rather than one actually caring about insignificant things like telling a story.

Ecchi Fitness, the brainchild of a man who refers to himself as "Eric the Goat Raper", is the opposite of Ivan Henley's World. It is by far the shortest webcomic listed on this site (at the time), at a minuscule 17 pages. In those 17 pages it somehow manages to lay waste to its readers like a towering inferno of the kind that I have never seen before. It is a stupid, stupid comic. However, it is not necessarily stupid in an ignorant or racist way, the way a Chick Tract or an A.W. Mann scribbling is. This is stupid in a wasteful way. Whether you read this comic to understand this review or read this review to see a second take on the comic you just read, you wasted your time. This comic is simply a waste of everybody's time. That's all it is. There is no reason to spend even five minutes on it. Or, frankly, to read this review. So I'm just going to stop here and take the rest of the day off to try to find a job or something meaningful to do with my time.

First off, you have to commend Eric the Goat Raper; he doesn't waste ideas. Rather than take a great idea and then ruin it, he dredges up a concept from the bottom of the plotline barrel and ruins it. Yeah, he takes a concept that's already bad and makes it worse. I would think it would take true effort to do that, but here we are.

You want evidence? Here you go. First, a brief synopsis of the story. A "woman" who cannot be considered feminine by even the most accommodating standards is left to keep an abandoned gymnasium, and is instructed to keep it open no matter what, and keep coming to work. Oh yeah, and her boss basically murmurs to himself "yeah right like nothing's going to go wrong" as if he knows exactly what's going to happen and he makes her go to work on purpose. Amazingly, she does all of these things without so much as considering dialing 911 and getting the fuck out of there.

I have no idea what kind of person would work at a creepy-ass place like this. The only thing I can figure is that she owes this creepy boss something absolutely mind-breakingly huge, like he bought her the most rarest and totally awesome Star Wars novelty toy in the world, and this comic chronicles her working off her massive debt. Even then though, I would think she could come up with some other way to pay it off. I guess a quick blowjob was out of the question though, and besides that getting Internet access and webcomics is a totally cool perk of running a gym. It's totally rad killer awesome, mate!

Please, what a stupid reason to get a job. Person of indeterminate sex, I beg of you, just get Internet access and get a life. Like the kind of life I would probably be getting too, if I weren't bitching at you and this webcomic.

…And thus we meet our star…

Anyway, the next page blacks out to an insanely creepy thing staring at her in the darkness, saying "cute, real cute, hehehe," ostensibly at the new gym director, who I believe moonlighted as the Vera de Milo on In Living Color when Jim Carrey wasn't around. All this character really needs is a second ponytail and to go "HEEE-HAWWWW HAWW HAWWW HAWW" and I could deal with the comic's shortcomings. Get a decent artist and I might even crack a smile.

But no, instead we get what looks like a silhouetted penis head grimacing in the darkness. And it turns out to be an anthropomorphic medicine ball with arms (but no legs). Oh yeah, and in spite of grabbing Vera de Hee Haw on the tits as a greeting gesture this medicine ball has no genitals or any visible source with which to generate testosterone. But he's totally straight and totally into grabbing chicks' tits.

Vera de Hee-Haw bashes it around and looks to be in the throes of pure joy, beating up this medicine ball that just grabbed her tits. Turns out that said medicine ball is a dead person that was such a weirdo creep that Heaven didn't want him and Hell was afraid he'd take over. Or maybe he was just a Marine. Anyway, his mission is not to think perverted thoughts for a few days, and he has sucked so badly at it that he's been kept on Earth for years.

So first thing he does is tell her that he'll tell her a secret if she'll flash him her tits. She says "maybe", and he tells a joke so lame I can't in good conscience post it here. 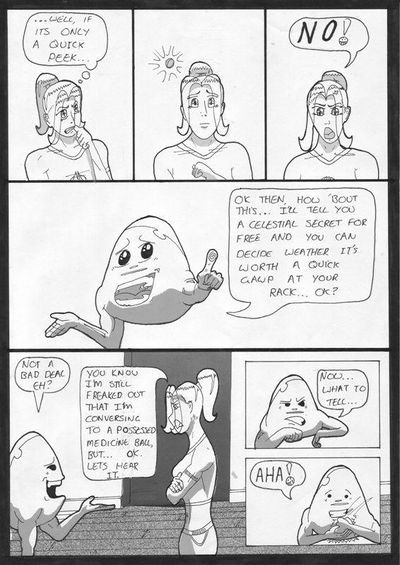 So basically our friendly everyday goat raper takes an absolutely horrible idea ("possessed medicine ball grabs women's tits compulsively" being among the worst ideas the human mind can conceive) and makes it even worse by drawing his lead completely wrong, drawing his medicine ball as disturbing as possible, throwing in a few half-assed movie references and calling it a day. I have no doubt he has long forgotten this smear-on-the-wall of a webcomic; it hasn't been added to since 2008 - but it would be nice if Eric could take some time from raping goats to deleting this thing and sparing people the unpleasantness of knowing it exists.