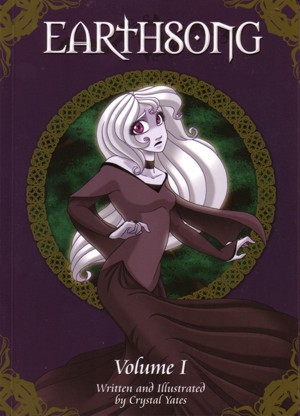 Fantasy comics have always been quite the audience draw on the internet, especially given that fans of World of Warcraft, Lineage, Dungeons and Dragons, and other fantasy IPs are notorious internet trolls. Earthsong is no exception to this, and remains as one of the most popular fantasy comics on the web, just coming short of such webular juggernauts as Inverloch and The Phoenix Requiem. Just like the Sarah Ellerton pieces, Earthsong boasts a a magical world, a colorful cast and a deeply detailed story. However, in spite of all these commonalities, Earthsong manages to be incredibly boring and long-winded.

How boring? I fell asleep while reading this comic to review it. During a fight scene. Twice.

Welcome to Earthsong, or as I like to call it, the cure for consciousness.

This comic starts off in one of the worst possible ways a webcomic can start off. No, I don't mean that fourth wall-tapping crap that other shitbomb webcomics start off with. Worst than that. It starts with an apology. Author Crystal "Lady" Yates has enough confidence in her work to put it on the web for the rest of us to see, but not enough confidence to so without apologizing first. She precedes her story with a mawkish, pity-grubbing apology for how lousy her art is.

I'm calling this a downfall because it colors my judgment from then on. No matter how pretty the pages are, no matter how much work goes into the fight sequences, or story exposition goes on, the reader will always have in the back of his/her mind that this author does not have confidence in her work. And if "Lady" has no confidence in this story, why should any reader?

Ironically, Yates should not apologize for her art. It's actually a cut above most webcomic art out there. No, Yates does not owe her readers an apology for her art. It's the long, arduous story ahead that merits the mea culpas.

If you're interested in a good laugh, the Earthsong about page offers all the exposition of the comic in a staggering 21 paragraphs. "Lady" Yates is very interested in her elaborate universe that she's developed as an excuse to have Medusa pug it out with a goblin, so much so that she's dedicated an entire fucking essay to it as well as nearly 100 pages of exposition in her comic to it. I read it just to get a feel for what I was dealing with, and what I anticipated from this comic was long, boring exposition in the place where an interesting, compelling story should be…and that's exactly what I got.

Since I know better than to burden readers with 21 paragraphs of plot prattle, I'll sum it up inside of one. Earthsong is the name of a planet where rogue creatures go when they've been infected with "soul stones", or the element of their native planets accumulating in their bodies. The soul stone can grant powers, but if said afflicted folks stick around their native planets for too long, the soul stone will be too pure and kill its host. So, to avoid all this senseless death, planets around the universe send their soul stone infectees to Earthsong to hang out, fight baddies, or whine as hard as they possibly can.

Okay, there's way more to it than that, but that's the most pertinent information the average reader needs. Monsters fighting each other with magic powers. Done. However, Yates is not content with giving readers the gist and then building from there. Oh, no. She jams all the fucking exposition in her 21 paragraphs of blather down the reader's throat across her entire fucking comic. And then when she's done, she gives the reader even more exposition as a chaser to the exposition.

Have a friend on standby to deliver the Heimlich maneuver or you will choke and die on all the exposition.

The art starts off decently and then graduates to downright pleasing (which makes that initial apology all the more ridiculous). The art is easily the best thing about this comic. Even though Yates starts off with a lot of cop-outs such as a total lack of backgrounds and ham-fisted blur effects, it gradually gets pretty good. Backgrounds are more fleshed out and characters are more expressive, making for a visually pretty experience. I suppose I could complain how some of the monsters in the story such as the vampire or the demon look like walking stereotypes of their species, but I think that was the intended effect for recognition purposes, so I'll let it go. Also, Yates gets way too creative for her own good when it comes to the comic's lettering.

Please, tell us more about the taint. LULZ.

This could have been a good story. This could have been the totally bitchin' adventures of Medusa and a dragon girl beating the shit out of a genie and a goblin. This could've been the even more awesome adventures of a Chinese martial artist kicking a vampire in the taint. This could've been the fucking spectacular story of a banshee, a purple chick, and a cat girl in one awesome threesome of kick ass, but, sadly, none of this is so. There is so much potential here, and yet none of it will come to fruition because it has to get around "Lady" Yates' storyline.

What we have here is the Van Helsing movie in comic form. Celestial bullshit aside, this comic is evidently an excuse for monsters from varying universes to meet up, and beat the stuffing out each other except in over 200 pages, they only fight once (unless you consider walls of text a form of abuse and I do). Yes, in place of all the awesome ass kicking that should be happening, we get lots and lots of exposition. After the first fight, we get exposition on traveling between worlds. Then we get exposition on planet Earthsong's back story. Then we get exposition on more inter-world traveling and soul stones. Then we get some exposition on character relationships. And after the exposition on character relationships, we see protagonist Willow scribbling in a journal, followed by more character exposition, this time with more angst. And on and on. Watching these classic archetypes sit around and blather about stupid shit is like watching Rambo chat with Robocop about how he has a crush on O-Ren Ishii. It's fucking frustrating. These are all characters who are known to show up in adventure/fighting stories, so why aren't there more fight scenes? Oh, right because Yates, in all her artistic abilities can't really draw a good fight scene, otherwise I wouldn't have fallen asleep while reading it. TWICE.

Yes, wasted potential is the name of the game here at Earthsong. The storytelling is a let down and so are the characters. The story follows Willow, a purple girl whose species, origins, and abilities are completely unknown, though it appears she can go from zero to angsty teenager in 0.2 seconds. Really, that's all we know about her. For all the expositing Yates does, we really know nothing about Willow. And I don't mean her origins, I mean her personality. She oscillates between doe-eyed Pollyanna and angsty bitch with little else to show for her character. I suppose one could argue that "Lady" Yates hasn't put Willow in enough situations to show her range, but that's Yates' fault for spending more time on stupid exposition about planets and shit rather than show us what this character is all about.

Other characters who go to waste are Nanashi, the martial artist who doesn't really perform martial arts after the first 20 pages, Gwendolyn, the elf woman who expresses sadness through bitching and moaning, and Tristam, a vampire who bitches and moans even more than the elf woman. I haven't seen a vampire this twatty since Anne Rice's Louis, but even he had Lestat to balance him out. I get what Yates is trying to do with these characters. I see she's trying to show these characters outside their respective archetypes, but she strays so far from audience expectation, that the reference loses all meaning. What's the fucking point of a vampire who pisses and moans about everything, and does not bite one character (except the one time)?

Ultimately, "Lady" Yates needed to understand what sort of material she was dealing with before setting out with this lofty storyline about huffy purple women and vampires not kicking the crap out of fish men. This is a story about characters from pre-existing mythologies thrown together by way of a heavy, highly detailed story about planets and jewels and other crap like that. Both concepts aren't bad, but they are bad together. Elaborate celestial stories work when the star stuff is allowed to take center stage. Dragons beating up other mythical creatures work when they are given center stage. However, when these two are put together, the celestial stuff seems boring and the mythical stuff is so watered down it loses its entire purpose. Either stop with the lofty planetarium story, or don't bother with the vampires and goblins, Yates. You can't have it both ways.

I don't know if I touched on this enough thus far, but "Lady" Yates is very in love with her gigantic, elaborate mythos. She put no less than 21 paragraphs of it on her About page. She also holds a degree in fine art history, Egyptology, and archeology, which means she's not terribly interested in holding a day job. Finally, Yates complains about her publisher, Seven Seas Entertainment, screwing her over (there isn't even any mention on the site anymore). I guess studying egyptology didn't really prepare her for dealings in the comic biz…

A time tested lesson about all comics is that good art cannot save a faulty story. This story is an example of an author who wants to get too many things done and doesn't accomplish enough with what she's got. It's good to try new things, but the main goal shouldn't be a constant struggle to be "different" but just telling a compelling story, which Earthsong isn't.

I leave you with this bit of art. This was actually a guest strip provided to Yates… 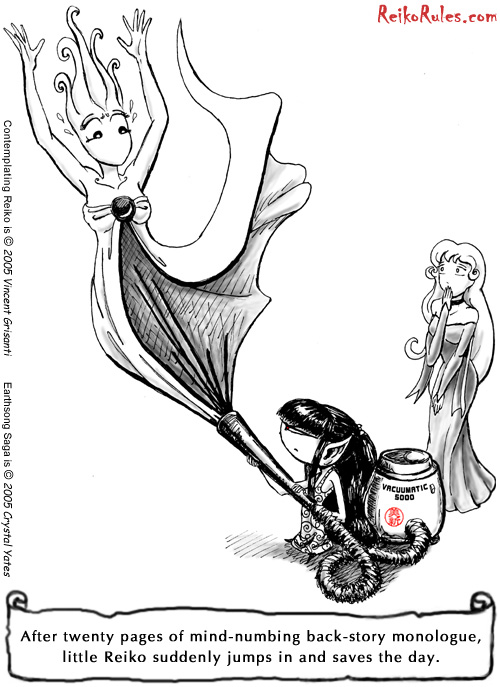 …and this is from one of Yates' fans. Thank you and good night.