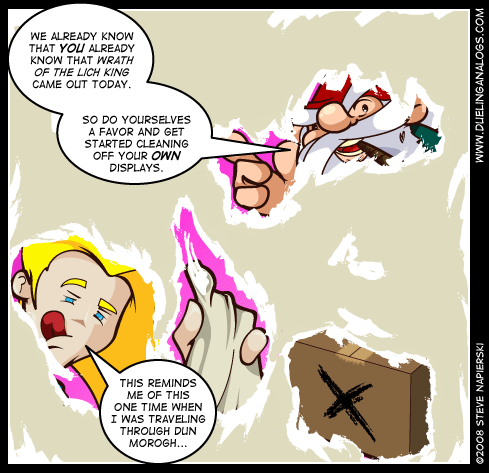 See all that white stuff they're cleaning off the screen? It's SEMEN! Way to keep it classy, Steve Napierski.

I typically don't read gaming webcomics because they are among the worst webcomics out there. Most All gaming webcomics are blatant rip offs of Penny Arcade, and even when they try to deviate from the traditional "two guys on couch" formula, they are still derivative and painful. Every time I read a gaming comic, I feel like the character Alex from A Clockwork Orange, strapped to my chair receiving the Ludovico treatment, watching as the things I know and love get perverted and destroyed and I am helpless to change my situation. And even though I cry and beg the internet for mercy, to stop defiling the lovely characters of video games I've come to know and love, the internet callously keeps my eyes fixed on the screen and persists with its "treatment".

And that is why I don't read gaming webcomics.

However, I made an exception here because after reading Yaouhuntressearth's recent review of The Outer Circle, I felt the call to duty in ripping apart Steve Napierski's other piece of shit webcomic, Dueling Analogs. To those unfamiliar with Napierski's work, he is an unwavering douchebag who Mary Sues harder than even the likes of Ryan Sohmer and Mookie Terracciano. His work has been reviewed by at least Yaouhuntressearth and the Elders of Zion's Mike Saul, and in spite of that, his material is STILL deserving of yet another verbal ass whooping.

This is for my love of video games, you cocksucker.

This comic, thankfully, has no plot. It's just a series of strips strung together as Napierski dared himself one time after another how stupid/tasteless/boring he could make each joke. I have to say this is one of the comic's few highlights. Being forced to read Napierski's material strip after strip just to keep up with a storyline would be a form of torture even the Ludovico treatment can't top.

In spite of Napierski's efforts to draw bigger, better titties, he never does seem to overcome his greatest problem: abject laziness. A recurring element in the comic is the "console wars" where gaming consoles have conversations with each other. These comics are simple copy-cut-paste pieces. He's drawn three or four total images here and slaps them together in Illustrator to put together his shitball comics. This process probably doesn't take him more than ten minutes a piece. He does this a lot, and while some copy-cut-paste can be fine in very small doses, the level at which Napierski practices this vile witchcraft is unacceptable (though to give credit where it's due, he's not quite as bad as Buckley). 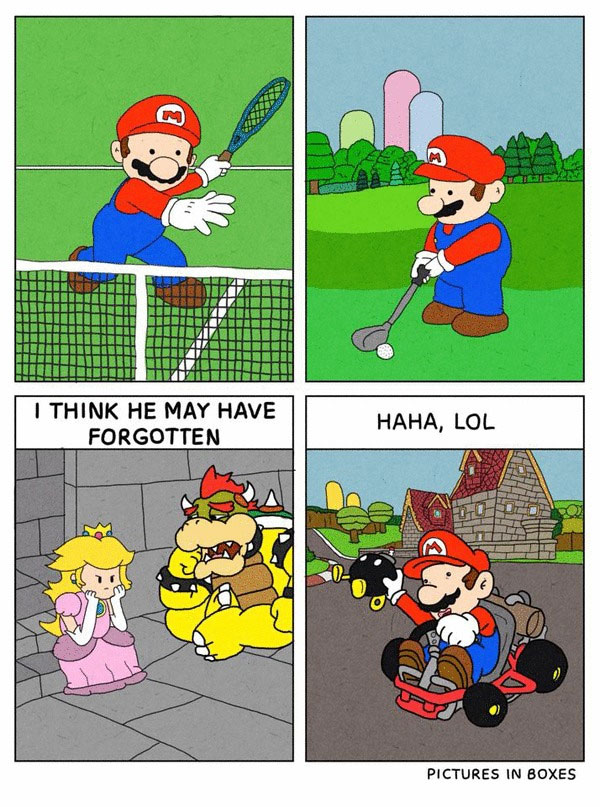 Well, even Mario needs some time off, I guess.

Jesus Christ and his broken Xbox 360, the writing here is fucking atrocious. There are only about three jokes that Napierski knows how to tell: misogynistic jokes, recycled jokes, and up-the-ass jokes. The rest is otherwise boring shit that isn't even remotely funny. All of them leave any reader beyond a fifth grade level with the same reaction:

Yeah, really. Let's start with the misogyny. Napierski has women issues as evidenced by comics like these two. Bonus points to that last one for looking like an ad for the UroClub! Lulz. Anyway, the man hates women. He sure as hell doesn't respect them, which is behavior only fitting for a sheltered gamer who probably never talks to girls outside World of Warcraft (and even then you never can be too sure if they really are women). I can see his repressed rage now: "she'll never talk to me IRL, so I'll just draw her with her boobies hanging out! And me--I mean Harvey, fucking her right up her stupid ass! Yeah, that'll show her! (insert repressed sobbing here)" Yeah, he sure shows her alright, and he shows the rest of us what a desperate loser he is. Only in later strips do we see him grow up ever so slightly, but I highly doubt that he could completely quit his He-Man Woman Hater ways.

Furthermore, Napierski seems to draw a lot of his inspiration for his "jokes" from other media. Directly. In that he straight up rips the shit off. Look at this strip from VG Cats in 2004. Now, look at this strip from Napierski's early archives in 2005. It's essentially the same fucking joke. Napierski, if you're going to rip off anybody, did it have to be fucking VG Cats? Now let's investigate another one. Napierski offers readers his take on the Chuck Norris humor that's been floating around the interwebs for the better part of a decade. The sheer unoriginality is just painful. There's more examples than that, but I'm entirely too traumatized to troll the archives anymore than I already have.

Oh, but the recycling doesn't stop there. Napierski apparently thinks "going green" pertains to humor as well, repeatedly recycling his own stupid gimmicks like the "Games I'm Glad Were Never Made" bit, "Rejected Megaman Villains", and those fucking conversing consoles. Really, these gags are just vehicles for more raunchy, stupid, up-the-ass humor, so there's no reason for them to be a running theme if it's the same shit over and over again. A more capable writer would know that, but then a more capable writer would never bring him/herself to write out the phrase "Sonic the Felching Hedgehog."

Let's come back to the up-the-ass humor I mentioned in the beginning. Gay humor too. There's a lot of it. A whole lot of it. A whole lotta lot of it. Apparently, Napierski treats the ass and gay humor as some kind of trump card. Wanting for a joke? No problem! Napierski just reaches into his arsenal of retarded comedy writing and pulls out the ass joke, or the gay joke, and fucking hilarity ensues, right? No. Not in the least. Ass humor as a trump card only works in two places: middle school and high school, and this is the most telling thing of all about Napierski. By constantly leaning on this material, he tells us how immature he is. He still has this idiotic frat boy mentality that all he has to say is "Dude ur gay!" or "up the butt!" and the laughs abound, in spite being well into his 20's, possibly 30's. I say nay. This is not acceptable. It shows no wit or thought on the writer's part and if a writer HAS to rely on crude humor this much, then he's actually not nearly as funny or witty as he thinks he is.

All that said, and I still haven't gotten to the Mary Sue-ing.

Napierski has a skinny blonde self-insert, Harvey, as the prime narrator of this comic. Harvey is a prime example of a Mary Sue. He always pwns his friends, he always gets away with murder, and he always gets the bitches. It's nothing more than wish fulfillment bullshit, and it's very, very sad. I understand that Napierski is trying his damndest to be edgy with his edgy self-insert, but it comes off as incredibly self serving and repulsive. He needs to stop this and just get back to focusing on making jokes.

Oh, wait, but I just got done telling you how he sucks so badly at humor. Well, Napierski, I guess it's time to kill yourself.

In case the rest of this article did not get the point across, Steve Napierski is incredibly fucking full of himself. Here's an excerpt from his own website:

Based out of Chesapeake, Virginia, Steve Napierski is the creator of the popular webcomics Dueling Analogs and The Outer Circle. In addition to his early work on former webcomic Life With Fishnets and the more recent Bored and Evil, Steve is the founder of the webcomic group Gamers Pair of Dice. While not busy being a 'paragon' of the webcomic world, Steve has vast experience in web and flash design, having done work for many major automotive and boat OEM’s. He is skilled in JavaScript, actionscript and PHP.

A "paragon". Let's look that up, shall we? From Merriam-Webster.com:

par·a·gon
noun
a model of excellence or perfection

Dueling Analogs is a vile, immature shitbomb excuse for a webcomic. It's a pestilence upon society that could never be cured with enough penicillin. If it fell off the face of the Earth today, it would still be too late. Now, if you'll excuse me, I'm going to go watch some violent movies with my eyes pried open while listening to Beethoven. It's a form of torture far less loathsome than Dueling Analogs.

UPDATE: The webcomic itself is gone, though the website still exists.