There are comics that do very well with having original twists on anime tropes, or pay homage to them, or both - One Punch Man for taking the piss on superheroes, and at this point there are so many isekai animes that have deconstructed or flipped normal isekai tropes that they cannot be counted. But, there are also ones that try too hard at doing these things, like Dragon Circuit. This isn't something you'd recommend for someone, even as a joke. I do not even know what really happened in the comic due to how forgettable it is.

Page 2 is where the comic truly begins to become all over the place and dull. Honestly, it's just so bad that I forgot what I was reading and probably will never remember it again. Unlike the comic that's originally posted on FA, the Webtoon version has the pages like this one tilted on their side like that, which is pretty dumb. So it's more like the downfall was on page 1. 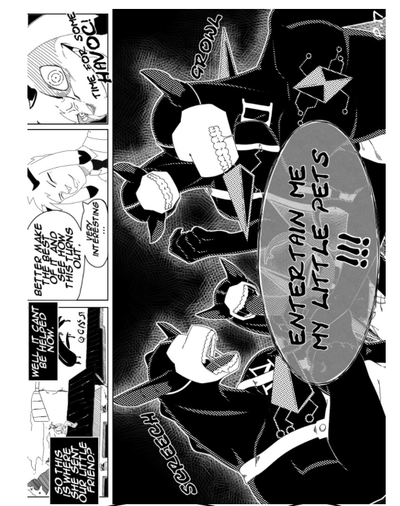 I had to tilt my laptop screen to read this shit. Yes it was POSTED SIDEWAYS!

The first page has the main character getting iskaied into a world populated by dragons and furries. 2-6 has a combat sequence in which the main character is obliterated, followed by some really bad surprise reveals that just happen with nothing interesting happening. 7-8 introduces a dragon girl, and 9-11 never makes any damned sense at all. The naming of the techniques being German and the superpowers is just so unoriginal. It would've made a lot more sense if the MC had a team to help, considering that he's literally the last of his kind (never told why though) and the whole thing needs an editor with a large gun to threaten Eam with every time Eam does crack again and wants to add more random shit to the comic.

Basically, they don't explain things like the powers, the techniques, and the world, so you never understand why you have to care for the MC. Why would you do that when you can have stylish fight scenes that look cool but lack substance? The characters themselves are, like I said, boring shonen archetypes with no quirks or details that make them stand out. It's like asking a five-year old to give a recap of a DBZ episode: "This guy fights that guy, and it's awesome, and there are explosions!" "Whee"-no really, this webcomic is the equivalent of having shiny keys jangled in front of your face. It is that shallow and meaningless.

The writer should've really spent at least some time doing world building and explaining what's happening in the story rather than trying to ape the likes of good manga such as DragonBall.

Its art style is great and such, but sadly, it was overshadowed by layouts so horrendous that parts of it were sideways at times, which made it unreadable. I had to tilt my laptop screen sideways at times just so I could read the shit. The three panels on the first page were very small, and it made it hard to read as well.

You should also note that it's posted on webtoons, so each "page" is a long series of pages stuck together via the vertical format. This can work, if done right, but... you see that picture up above? It was posted sideways. It's the only page in the comic posted sideways. No explanation is ever given for why it was posted sideways. This was such a colossal failure as a webcomic that it was enough to condemn it.

The writing is dull and boring in general. The villain's dialogue comes off as cartoonishly evil, and the main character tries to sound oh so brooding but comes off as pretty stupid, all while sounding flatter than a sheet of paper. Combine that with the already mentioned issue of the complete lack of worldbuilding or actual storytelling, simply having a random character who fights random shit, and you can quickly see why the writing in this comic... basically doesn't exist. There's dialogue, sure, but the comic would arguably be better without it. At least then you could make the bold claim that the lack of narration or dialogue, and thus the lack of worldbuilding via those means, was some kind of artistic choice.

Instead, we just get this supremely bland McWarcrime of a webcomic where you have no clue why anyone is doing anything, so why even care?

It seems like he stopped working on the comic to create gay pornographic superhero comics. We're talking riveting titles such as "Bulge Crisis" and whatnot - you can find this on the artist's twitter linked down in the link section.

This comic is a fine example of what happens when someone with decent art talent but poor writing talent tries to make a solo webcomic. As good as the art looks, it just falls flat due to its being all over the place, having nothing explained, and not really appealing in general. It'll remain in the depths of the world wide web in a blanket of obscurity and will never come out of there, which is good.