Gather around children, and I shall tell you an exciting tale.

With a face like that how could she not be.

Once upon a time, a particularly unimaginative young lady on the internet called herself 'Zelda' and decided the rest of the internet needed to know what she was doing, all the time. Of course, a live 24-hour video from her bedroom would have been dirty, so she decided the next best option was to just draw what she was doing in mspaint. That way people all over the world could admire her all the time, and she didn't need to feel like a whore.

However, making and maintaining a comic all by yourself can be ever so tiring, and Zelda knew that a comic just wasn't a comic without some hot mano-a-mano action. So using her feminine wiles she swiftly recruited two boys who could not draw quite as pretty as she could and demanded they contribute, so as to make her own art appear more dazzling in comparison. You know, like putting a dead spider plant next to a glittering rose that has been grown in unicorn soil and watered with elf tears.

Yup, it's the return of that old "the internet needs to know what me and my wacky friends are doing today, oh us nutty guys" comic format! OH BOY I WONDER WHEN THEY WILL TELL US THEIR FAVOURITE VIDEOGAMES.

To be honest, the plot was basically summed up entirely in the introduction. This is a comic about people doing stuff. Now I know all most webcomics follow that particular look-at-us-be-interesting route, but at least the other ones try to fit in some goddamn jokes.

I guess it would be difficult to keep a constant story going, since the comic is run by three wacky individuals that clearly have different ideas about what could be considered entertainment. Zelda knows her drawings are the prettiest so she gets to sit around and angst about a lack of focus on herself plot. Zelda is the girl, see, so she needs to have girl angst. Nate's art is so bad it almost does a full-circle and ends up being so hideous it becomes entertaining. Orpheus describes his relationship to the viewer with an almost endearing innocence that I can't quite bring myself to mock; maybe it's just nice to see a gay character that isn't strutting around in leather straps and demanding to rub up against all the other boys. 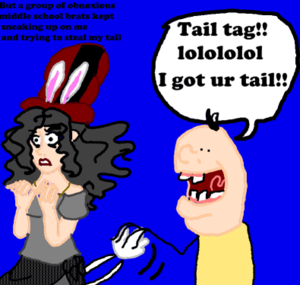 And that's why Zelda hates kids.

The grouping together of an affectionate couple and some girl they know sometimes gives the comic a kind of awkward atmosphere; like Zelda considers Nate and Orpheus her cuddly pets, to giggle and coo at while they cuddle and groom each other, but if they forget to acknowledge she is there with them she will give them a sharp poke in the ribs until they remember and worship her accordingly. When our loveable trio are not doing crazy things like playing board games and sleeping, they will take a break from 'plot' to cry (be it in misery or joy) about how insignificant and/or loved their comic is.

Zelda is probably the better artist of the three; her proportions are okay, but her style reeks of animu. She can only draw from three angles: straight-on, 45 degree angle and side. Detail is lacking and all of her characters wear mascara when she draws them.

Nate's doodles are the cornerstone of the comic. His "smiley face" thing is on every single fucking piece of merchandise available in the store. (No really, a store.)

Orpheus... can only be described by looking at. Words cannot capture the amount of heroin required to make his shit look sane. I guess you could always consider it in that kind of ironic way that some people do, ignoring the words and just chuckling at the sheer MSpaint mastery on show.

It almost seems unfair to poke fun at the art in this comic, since it's pretty clear that Zelda is making a genuine effort. I've seen webcomic artists capable of more do shit art just out of pure laziness. If she actually put in some practice and stopped drawing herself as a stroppy gawth she might actually get somewhere, maybe. I think Nate and Orpheus would be content to leave the comic for a ham sandwich.

It would not really be considered unfair to say that the writing in 'Doodle Diaries' is pretty fucking abysmal. What do you expect? It's basically a Mary-sue comic without the fun of making yourself into an all-knowing all-powerful Mary-sue. It is a blog with pictures. It is nothing but those who create it, in MSpaint form.

I am going to admit right now, I laughed at some of them. I am not ashamed, because I genuinely find some of them funny for all the wrong reasons, like watching a frustrated friend try to work machinery. The humor lies in the ineptitude of the creators.

Asking a lot from the writing of this comic is like asking someone's LiveJournal to be a dramatic novel. Don't be so silly.

The quality of this comic never really fluctuated. It started off dull and just stayed dull. With no structure or plot to speak of it basically just lies on the internet, taking up space like a comatose bear.

It is difficult to think that there is anything to these people beyond what is shown in the comic. They talk about school. They talk about boys. They play board games. If you were looking for emo furries or self-righteous gamers you're oh so very much in the wrong article because I genuinely doubt these people have any internet presence outside of Myspace and possibly Facebook. This is because they are busy talking about boys and playing board games.

Zelda pretty much threw Doodle Diaries together one lazy afternoon, and the three of them will probably continue to get a giggle out of it until they all leave high school and all move away to different locations and live full lives.

Here is a quote from the FAQ page of the site:

Pretty much anything interesting that happened to us that day. No matter how trivial and boring it is, We always just sort of assume that someone on the internet will think it's the most hilarious thing ever.