Thank you Cracked. Political comics: they seem too easy to review as one's own beliefs can be a major factor and it's all to easy to be biased, but I'm doing it anyway. Why? It's because no matter what side the author of this BS is on, they take themselves way too seriously. Democrats, Republicans, you name it, I'll find a way to call them out on their bullshit and explain why their comic isn't worth the toilet paper it was drawn on! This here is a comic called Diversity Lane! It's about an little girl named Diversity Lane, and the rest of the Lane family. But they're all fucking evil! Don't believe me? Let's read this together, shall we?

Okay, I gave up on reading this folks! From the first couple of pages of this, we're quickly and mercilessly hammered by Republican views and bias, and believe me when I say that it gets worse from here on out! Of course, your first warning sign should be when you first find this website and start to hear horror music, I'm not kidding about this either! Horror music plays on the front page! In fact, why are you even reading political cartoons to begin with? There are so many better themes for comics out there! But first, let me give you my two cents on political comics...

Why Political Cartoons are complete bullshit!

I've been butting heads with one of our own when it comes to politics, and frankly I wind up on the losing side more often than not... but I have mentioned my strange beliefs that a good political comic is one that gets the facts from both sides of the political spectrum. There is a problem with that as mentioned by local member Pidgeon Small!

It would be kind of messed up if we had to mold our entire society around making sure all our opposition had a fair say in our own personal beliefs. If you had to fact check everything you said for the rest of your life to make sure you included everyone elses opinions. It'd be like a normal church service getting penalized because the pastor forgot to say some good words for Islam, Buddhism, and Wicca before the end of the service. Or if radio talk shows, who nobody is being forced to listen to anyway, are then forced to have to include or mention, or give credit to stuff they don't believe in….oh wait. The Fairness Doctrine…

Now that's a good point, why should political comics even consider the opinions of the other side they're against? It sounds like a good idea, but it'll lead to a lot of troubles and worse in the end should you force one to do so. However... politics and religions are two entirely different things, and in politics, it's generally a smarter move to consider both the right and the left's view on something before making your own final decision. Overall though, my point is that the reason political cartoons are bullshit is for many a reason, but what gets to me the most is that it's mainly the artist trying to get you to believe his opinions without any backup as to why. Or more recently with comics like Diversity Lane: The Right is right, and the left is full of America hating Nazis! Don't get me wrong though, the left can be equally shitty as well, but that's not the only reason why most political soapbox comics are full of it.

Now as to that last part regarding a lack of entertainment... I am open to the fact that politics ain't all smiles and sunshine and should be taken seriously, but these comics are made to critique these things and should have a slight undertone of humor to wash down the "Uneasy Truth". Unfortunately, these are POLITICAL comics, and humor here is severally limited to "Ha ha... that side believes such and such, but this is happening because of their beliefs and they're all idiots! Did I mention that I'm always right?" Is a little bit of intelligent humor and an author with an open mind too much to ask for? 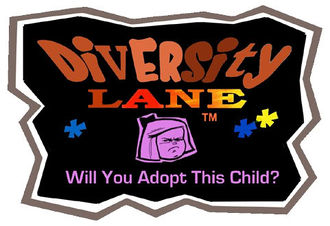 The short answer from me is, NO!

The comic centers around our little trouble maker Diversity Lane, she's the only conservative voice of reason in a house full of anti-Christian, gay loving, money stealing, terrorist supporting, America hating, blackmailing, violent, and overall hard ass piece of shit liberals! Let's not forget about our lovable little scamp Diversity, she so happens to be a compassionate, loving, and open minded... OH FUCK THIS NOISE!! The whole family is psychotic and Diversity ain't helping by always scowling and only showing joy when she makes a smug remark and all available plots revolve around how evil the left can be and how we should all suck right wing dick!

For god's sake man! I've got republican views myself despite being a vile Democrat, but there's nobody on the left who is that extreme and wants to destroy America! [Silly, most leftists in fact are exactly like that. I know from experience. Long Tom.] Name me one person short of a Neo-Nazi, Ku Klux Klan member, and/or psychopathic criminal who seeks to destroy the very country we live in (Name me a democrat that is a neo-Nazi or in the KKK while you're at it, oh wait, you can't can you?). [Oh, but I can. Long Tom.] The whole comic is a political agenda with no outside view presented, he seems to be channeling the all mighty spirit of Faux News whenever he makes these comics as he confuses democratic liberals for a tea bagger, and considers Global Warming to be fake because winter isn't a scorching hot summer day. It's all political right wing bias and fear mongering as every comic here seems to be fueled by the idea that all liberals are out to get you and everything they do is against America!

Every character aside from Diversity is portrayed in an extremely negative light, but Diversity herself is never challenged on her views at all! You know, this reminds me of Billy the Heretic! Think about it for a moment, both kids are the "odd man out" of their bat-shit crazy/evil family, the only voices of reason whatever that keeps the family from imploding in on itself (aside from a Christmas miracle here and there), they're both pretentious smart-ass douche-bags, and both of them promote a biased political agenda! The only difference is that one is a smug Jew hating nazi and the other is a scowling smug little girl with a profound interest in right wing politics.

... It's right wing political bullshit! Occasionally he'll bring up topics that are legitimate and really are screwing up things for fellow Americans, but it's all done through the mouth of a scowling little brat that is a complete fucking smart ass! How can you get your point across to readers when the main character has the personality of a rattlesnake?

Well... aside from the pure hatred of all things liberal oozing from every page, the art isn't bad, but it's wasted on subjects like politics. There is an overly abundant flaw in his art though as I'll explain in a bit, but the guy can draw, I'll totally give him credit on that! Now let's take a look at how he uses the art to structure a joke/critique: 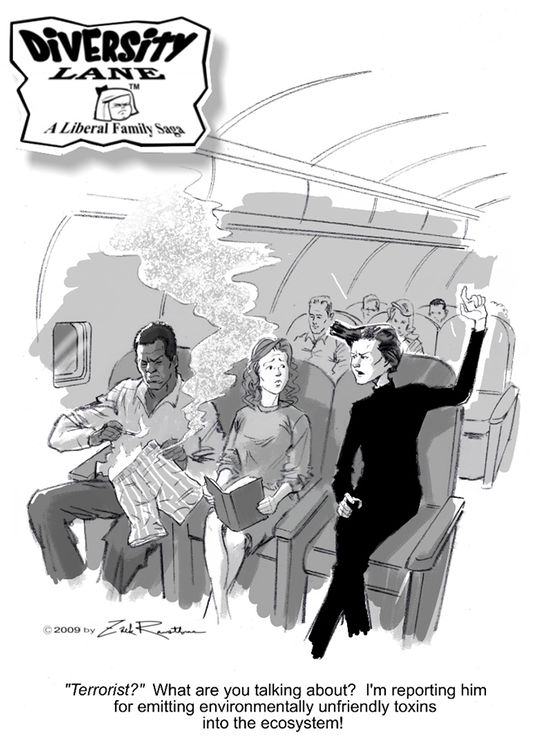 Ask yourself this: Why is the environment the subject in this? The subject is the terrorist who wore bomb underpants, but again Zack believes that this comic also needs another jab at the librul's concern with the planet. That's idiotic and belittles the intelligence of the reader, we get the idea that you think global warming is just a big scam, but must you repeat these things over and over and over and over again? RULE OF THREES BRO! There's not a whole lot you can do in a one panel comic strip I'll admit, and you don't have room to make a mistake. It's obvious he's trying to make this comic humorous, but it comes off as smug and boring (the character's general negative attitude doesn't help either). It's not impossible to make a political comic funny, just look at comics like The Pain, through clever writing, you can really let your mind pick out the absurdity of any situation.

So, terrorist on a plane lights his pants bomb on fire, how's about we say that the passengers are all panicking and freaking out! But the punchline is that the woman in black is more focused on the fact that the plane is a non-smoking flight! Do you not see the tiny bit of humor in that? Zack doesn't. Let's move on.

I was raised by a family of conservative republicans, they've had their moments but my folks are very open minded even when we talk politics. I am thankful for that because the family in comics like this are evil caricatures of one man's uneducated beliefs. What we've got here is a webcomic that promotes intolerance of any view or opinion aside from "The right is always right". I'd say this comic was better than Billy the Heretic, but that's like saying that eating a solid turd is better than drinking diarrhea through a straw. 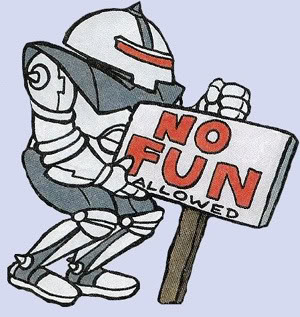